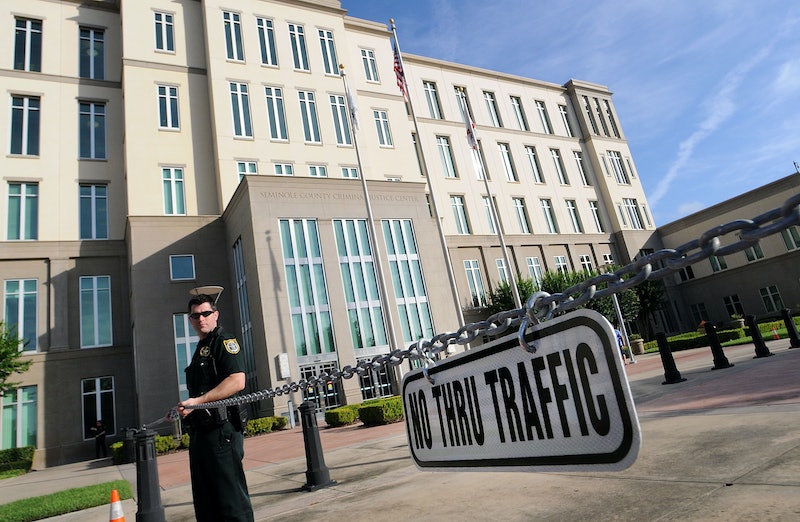 The Florida city that became the face of racial profiling after unarmed Travyon Martin was shot and killed by the neighborhood watch leader, George Zimmerman, has announced that it will be changing the rules for how civilian patrols operate. The new rules will explicitly state that volunteers should not be armed, and will include mandatory background checks. It's about time.

The changes come thanks to Sanford's new police chief, Cecil Smith, who took over in April after the previous police chief was fired in the aftermath of the Martin shooting. Smith, who at one point called the old program dysfunctional, will formally announce the reforms at community meeting in Sanford this Tuesday.

"There really was no accountability," Smith said. "Neighborhood watch is a very simple organization. It's about neighbors helping neighbors, talking to neighbors about ways to make their neighborhood safe. That's it."

"The objective of neighborhood watch is to observe, identify and report, and that's what we're getting back to," he added.

As it stands, members of neighborhood watch groups are pretty much free to do whatever they'd like — they're mostly untrained and unsupervised, don't register with police agencies of sheriffs' associations, and obviously have varying attitudes towards their roles. The new rules will change that. They'll require background checks for any volunteers, a six-week-long training program for captains, and regular check-ins with the police department. Most importantly, they'll mandate that volunteers be unarmed while on patrol.

According to Shannon Cordingly, a spokeswoman for the Sanford Police Department, anyone who violates the rules will be removed from the program.

"People in the community are nervous to join a group that was tarnished in the media and got a bad image with everything that happened. We really want to put those fears to rest and get the community going on the program," Cordingly said, adding: "We never encouraged people to carry guns."

There are worries that the new rules will clash with Florida state law that gives licensed gun owners the right to concealed arms, and risk a lengthy legal battle — already, the changes have brought public criticism.

"Someone walking through the neighborhood walking their dog who carries a concealed handgun for their own self-defense wouldn't be subject to [giving up their gun], but a person who is on the neighborhood watch would be," the executive director of Florida Carry, a pro-gun organization, told the Los Angeles Times . "It puts people in a very strange position."

But as Smith pointed out: "We're not going to make everybody happy."

The neighborhood watch program was set up in the 1970s, under the National Sheriffs' Association, in part a response to the murder of Catherine Susan "Kitty" Genovese, who was killed outside her Queens apartment in full sight of her neighbors, in spite of screaming for help. Sanford's program came under intense scrutiny in February 2012, however, after watch leader George Zimmerman fatally shot Martin, an unarmed black teenager who was on his way home from a convenience store. Zimmerman was acquitted of all charges, thanks to Florida's now-controversial "stand your ground" laws.