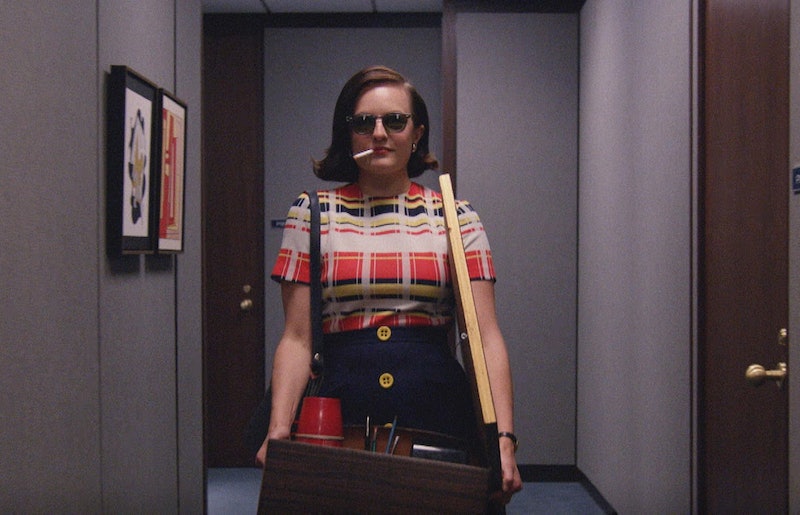 While it's always been my firm belief that Peggy Olson is the most badass badass Mad Men has ever seen, it's never been more clear than it is in Season 7 of Mad Men. Completely gone is the quiet, unsure secretary we met in Season 1 — Peggy is now a force to be reckoned with, and a force who has no qualms about intimidating the misogynistic men she works with at that. Even though it's sort of a little out of character for me to say "you go, girl," for Peggy, I'll do it: You go, girl.

Peggy has always been written as a major force of nature in the advertising world: She shattered the glass ceiling time and time again, working her way up from Don Draper's secretary to Copy Chief (with the title of Creative Director almost certainly in her future), she proved to her male colleagues that she was more capable than they were at doing her job, and she refused to take "no" for an answer time and time again. Simply put, Peggy is a badass, and her style of living is something that we should all aspire to.

But, how does one really achieve the Peggy Olson lifestyle that allows us to be our best Peggy Olson self? Your game plan is really laid out over all seven seasons of Mad Men, but since it would certainly take too long to watch the entire series over in a few days, here's a handy guide to follow in the meantime.

Don't settle for anything less than what you deserve

In Season 7's "The Last Horizon," Peggy knew she deserved an office at McCann Erickson, and she refused to fold and head over to the new building until her demands were met — even though it meant working out of the deserted former Sterling Cooper & Partners offices in the Time Life Building until they were. (And, when her demands were eventually met? Peggy spent the night rollerskating around SC&P offices while Roger Sterling played an organ, because #YOLO.)

Never let anyone tell you what to do

You are no one's errand girl, and they can get their own coffee. You have things to do.

Hold your liquor, but know when to let loose

Working drunk is an art, and perfecting it is key to living the Peggy Olson Lifestyle™.

Rollerskating around the Time Life Building is a good way to do this.

You do not owe anything to anyone, and let them know that.

Never be afraid to ask for what your heart truly desires

Whether it's what you want for lunch, or promotion you want — ask for it. Peggy was living that Lean In lifestyle before Sheryl Sandberg was even born.

Especially if everyone is watching.

Well — OK, this one is more of a life lesson than a Peggy "how to," but it's probably best to abstain from stabbing your live-in boyfriend with a homemade bayonet because you think he might be a burglar