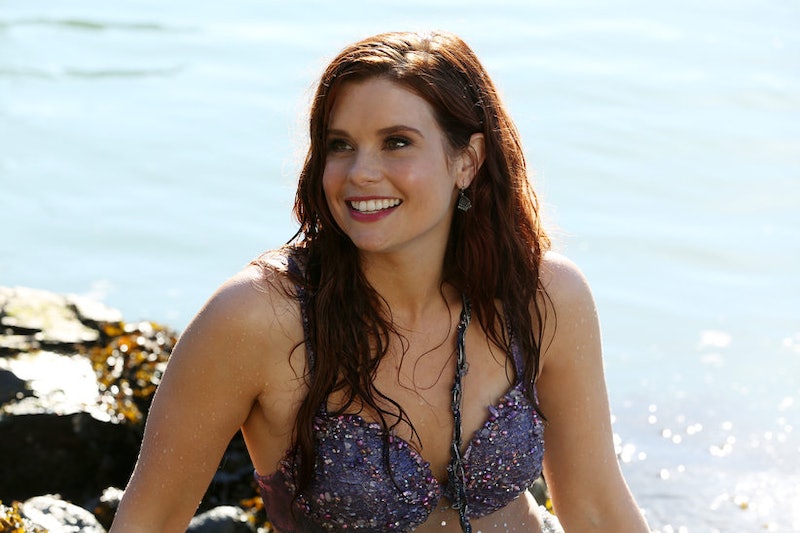 The moment we've all been waiting for since ABC's Once Upon A Time announced the most perfect casting in the history of the world finally arrived tonight: JoAnna Garcia swam onto the scene as Ariel. Coming from someone whose favorite movie was Disney's The Little Mermaid and spent much of her formative years begging her mother to dye her hair red, Garcia was the ONLY choice for this role and I'm glad ABC saw that. There was no singing involved (unfortunately) and in true OUAT fashion the original story was a little distorted but it was one of the best character introductions in awhile (considering Tinkerbell's was such a flop).

We're currently only six episodes into the third season of ABC's fairytale-inspired show but it seems like each episode has introduced a brand new character with a relevant backstory. I guess that's one way to break up the extreme boredom that results from watching pretty much nothing happen in Neverland for the majority of the hour. Good news though, OUAT fans, we're going back to Storybrooke next week (thank god)! It may be safe to assume that, following what's sure to be an exceptionally quick turn of events next week, we probably won't see new characters for awhile once the original cast returns to their home. So, in case you were getting a little lost, here's a list of the new characters that have debuted since the cast left their home.

Technically Pan was introduced in last season's finale but we didn't know too much about him until the current season began. We actually still don't really know anything about his past, just how he's terrorized others for his entire existence. If you've never seen Walt Disney's film adaptation of J.M Barrie's masterpiece, I won't even suggest you bother because it won't help you to understand this little devil at all. He kidnaps boys and holds them hostage (his Lost Boys army) and is holding Henry captive while trying to turn him evil and threatening to kill him. For someone who vowed to never grow up, he absolutely does not have a childlike innocence.

Of all the characters introduced onto OUAT, I feel like Tinkerbell got cheated the most out of a good story. The show's creators set her up as a rebellious and over-enthusiastic fairy-in-training that gets spurned by Regina because that happens to everyone. She ends up losing her fairy wings and now she kind of looks like what I can imagine a Lord of the Flies kid would look like in their 20s if they were still on the island. It's just kind of sad. She's got a personality and a serious chip on her shoulder, but the characteristic spunk and attitude of Tink just wasn't there.

You may have forgotten that he was introduced during Neal's short time in the other realm before catching up with the others in Neverland. Robin Hood was also introduced sometime last season, though he remained nameless, during a flashback that showed Belle saving one of Rumpelstiltskin's prisoners from getting skinned (he was the prisoner). He now lives in Rumpel's old castle with his son because Maid Marian passed away. Robin Hood and his son played an important role in discovering the magic left in the castle and in summoning the Shadow so Neal could catch up with his family in Neverland. Short-changed entirely out of a real backstory flashback, we can always hope for one of those sometime this season.

Apparently Captain Hook wasn't an only child; he had an older brother named Liam, to whom he served as first mate until he died. Liam and Hook sailed to Neverland in search of a plant that could cure any injury or ailment on the orders of their king. Unfortunately for Liam, he dies from a plant that is actually Dreamshade, a powerful and lethal poison. When Hook revives him using the magical water from Neverland he doesn't realize that the water can only keep Liam alive while he's on the island, so when they sail away on their ship, Liam dies. Hook immediately declares their king untrustworthy, becomes the captain of the ship, and essentially decides to become a pirate. RIP, big brother, Hook will avenge you.

OUAT's Ariel is pretty much the real-life version of Disney's animated character but her story got a little tweaked. In this case, catching up on Disney's The Little Mermaid would be both really fun and probably helpful, but really who needs any convincing to pop that classic in on movie night. Ariel saves Snow from drowning and becomes public enemy number one to the Evil Queen and ends up losing her voice because of it. She also never gets to be with Prince Eric (no happy endings here) but that's all about to change now that Regina wants to send her to Storybrooke to be with him in exchange for her help.

Remember when we were all atwitter about this epic casting? Well, even though Ariel stole most of the thunder on Sunday night's episode, Prince Eric debuted as well. He was perfect, of course, and they fell in love at first sight but that's the only sight they had. Eric, after his Ursula-honoring ball was setting out to travel the world. (Including Agrabah, could that mean an Aladdin/Genie/Jasmine storyline coming soon?) According to Regina, he's been living in Storybrooke all of this time, which would make sense since there still seems like there are so many people in the town that have yet to be introduced. Now that Ariel's heading there too, we're sure to see a lot more of them now that they'll be part of our world.

Six new characters in six episodes. Are you keeping up? The only thing missing now is an Aladdin crossover and we're pretty much set in terms of classic Disney. Nice job, OUAT.

More like this
Neil Patrick Harris Will Play 'Doctor Who's “Greatest Enemy” Yet
By El Hunt
Who Could Die In The Stranger Things Season 4 Finale?
By Kadin Burnett
'Stranger Things' Season 4 Volume 2 Trailer Teases New Episodes Coming July 1
By Grace Wehniainen and Gabrielle Bondi
Regé-Jean Page Spoke Out On His Rumoured 'Bridgerton' Return
By El Hunt and Maxine Harrison
Get Even More From Bustle — Sign Up For The Newsletter