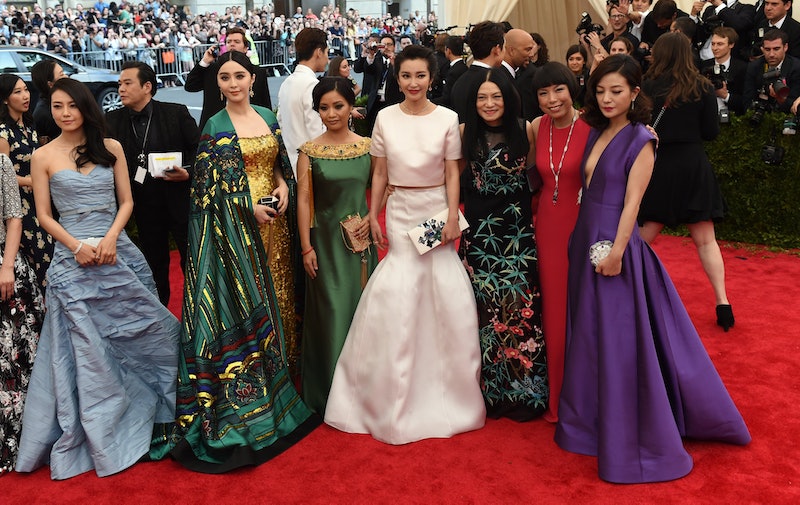 Perhaps one of the biggest fashion events of the year took place on Monday, bringing out a slew of costumed celebrities ascending the steps of the Metropolitan Museum of Art. While the stars stunned in unique looks especially made for them, the "China: Through The Looking Glass" dresses truly won the Met Gala. Sorry Beyoncé and Rihanna, the mannequins officially stole your shine.

The Met's newest exhibit, China: Through the Looking Glass, officially opens today. Some, including Monday night's gala attendees, have already viewed the exhibit, but have surprisingly kept most of the looks under wraps until the official debut. In conjunction with the museum's Department of Asian Art, the Anna Wintour Costume Institute's spring/summer exhibit explores "the impact of Chinese aesthetics on Western fashion," according to the Met's website.

The opening of the exhibit led to this year's theme of the Met Gala, which brought out celebrities clad in wares by major designers who were challenged to offer up their interpretations of Chinese fashion. While Rihanna stunned in a look by Chinese designer Guo Pei, Beyoncé took the exhibition title quite seriously, wearing a bedazzled dress that you could literally see right through. Sarah Jessica Parker soared to new heights with a tall headpiece reminiscent of fire, and Solange stunned in a highly structured piece. All that said, none of these looks could compare to the intricately designed couture dresses featured in the actual exhibit.

From Christian Dior to Ralph Lauren, Guo Pei to John Galliano, the exhibition displays how designers infused the undeniable influences of Chinese culture into garments. More than one hundred looks are featured in China: Through A Looking Glass, but here are a few to prove that you truly have to see it for yourself. (And while you're visiting, take a moment to realize that you're walking up the same steps as some of your most-coveted celebrities).