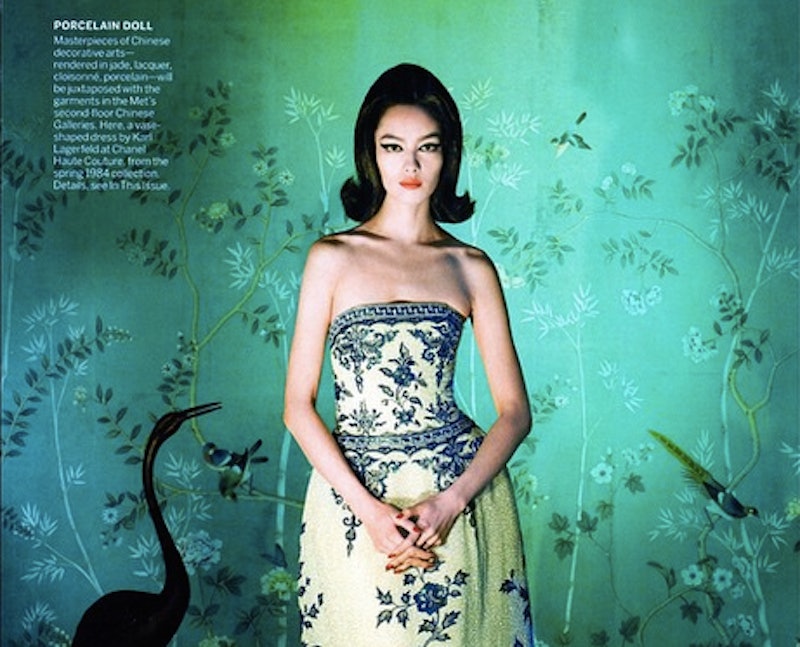 The Metropolitan Museum of Art’s Costume Institute Gala is undeniably one of the most glamorous and exclusive fashion events of the year. There’s always speculation about what celebrities will wear to the Met Gala, but the focus on celebrity fashion sometimes belies the primary purpose of the party, which is to celebrate the opening of the Costume Institute’s annual exhibit.

This year’s exhibit “China: Through The Looking Glass,” will be the biggest exhibition ever staged by the Costume Institute, according to Anna Wintour in this month's Vogue. When the theme was first announced, I worried that this year’s Met Gala would be overtly orientalist. But after getting a closer look at the exhibit in Vogue, many of my concerns have been addressed, and I feel much more confident that the Met will be able to pull off this exhibition without offending.

My biggest gripe upon learning this year's theme was the emphasis on Western interpretations of Chinese culture, rather than a celebration Chinese fashion and designers. I was also nervous about the pairing of historical Chinese art with the haute couture Western gowns. Perhaps these ancient artifacts would be relegated to an inferior, almost submissive, role, behind the modern Western designs. The early press releases never used the word "orientalism," but the theme was abundantly clear, like when the Met's CEO Thomas P. Campbell said "Through The Looking Glass" would reveal “provocative new insights into the West’s fascination with China.”

The Met has already given us a sneak peek of the Costume Institute exhibit, but those photos are nowhere nearly as well-styled as the images featured in this month’s Vogue. (This is one of the perks of having Anna Wintour as co-chair of the event.) The 11-page spread, shot by Steven Meisel and edited by Grace Coddington, features Chinese model Fei Fei Sun in a selection of couture dresses that will be shown at the exhibit alongside artifacts from the Met's extensive collection of East Asian objects and art. The dresses, from designers ranging from Alexander McQueen to Christian Dior, are presented as works of art, and Sun transforms with each different look. (Let's also applaud Vogue for using a Chinese model in this spread, celebrating the Chinese influence on Western fashion.) If nothing else, the visual beauty of this spread is striking. The first words that came to mind when I saw the editorial were "opulent" and "glamorous," which is really the Costume Institute at its finest.

This first look in Vogue was also refreshing because the organizers owned the label of orientalism with a capital "O." Andrew Bolton, the Costume Institute's curator, said the "greater aim... is to recast Orientalism in a more positive light as 'an exchange of ideas and an honored source of influence.'" This exhibit should be viewed as an exploration of the history of orientalism, not of Chinese fashion or Chinese history. That is a major difference, which helps to provide some much needed clarification of the goal of pairing Western dresses with Chinese artifacts.

Wintour's "Letter from the Editor" also addresses some of my concerns about the Costume Institute's theme, and highlights the benefit of showcasing these dresses at the Met, an institution Wintour describes as being "so laden with tradition that it nearly groans under the weight of history." The museum's Department of Asian Art is celebrating its centennial this year, demonstrative of its extensive expertise in Asian art. The elaborately curated Asian galleries are a perfect backdrop on which to contextualize the modern Western dresses. The history of China's influence on Western design and fashion goes as far back as trading along the Silk Road in Ancient Rome, and the Met can explain how those thousands of years of Chinese history have affected Western thought and fashion.

That institutional knowledge is shared in this Vogue editorial, in captions accompanying the stunning and tasteful images. The dresses are all clearly Asian-inspired, often using a lot of silk and relying heavily on embroidery, but in some cases, it's hard to pinpoint exactly what makes the dress look "Asian." And this is where the much-needed regional expertise comes in.

Take, for example, the blue and white Valentino gown from 1968. The intricate flower pattern on this dress is associated the porcelain pottery that Westerners still refer to as "fine China." According to the caption, "Many of the garden motifs we associate with China were first popularized in the West by the aristocracy of France and England..." In other words, this pattern is not from China, even though it's visually associated with the Asian country.

This is the kind of history and expertise and insight the Met can provide, and it helps the viewer tease apart the influences and understand what is actually drawn from Chinese culture from what was added by the West, distorted through the lens of orientalism. These thoughtful captions provide the details needed to understand the visual references being referred to by Western designers, which, in turn, provide a history of China's own fashion trends. The exhibit seems to be much more respectful of Chinese history than I believed it to be based on first glance, and it gives credit to Chinese culture where it's due, which is such a relief.

Based on the evidence, maybe not. In this same issue of Vogue is a profile of Elisabeth TNT, an editor of the magazine, as she prepares her outfit for this year's Met Gala. She says she's, "dreaming of Orientalism," and her designer friend Fausto Puglisi "cooed, 'I see you as a Chinese empress in Versailles.'" The Met's careful and seemingly measured examination of orientalism may be perceived as approval to co-opt the things from Asian culture that look the best without any closer look at what these trappings signify. I worry that the theme gives attendees, and the general public, implicit approval to indulge in orientalist fashions and notions, knocking some hard-won cultural sensitivity down a few pegs.

There’s no way to know if my worst nightmares will come true until we see the red carpet, and I’m crossing my fingers that the Gala guests will pull it off without offending anyone. But the lens through which I'm perceiving the exhibit has changed drastically based on this first look in Vogue; "Through The Looking Glass" seems not to be a celebration of orientalism, but a way for us to understand the history and influence of orientalism through fashion. I just hope that nuance isn't lost in translation.