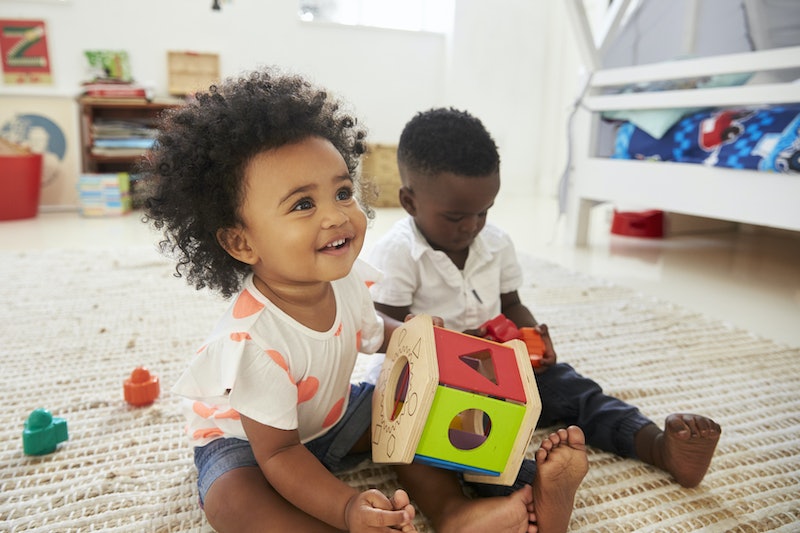 And today in “One Small Step for Amazon, One Giant Leap for Gender Equality,” we have this heartening piece of news: Amazon has removed “Boys” and “Girls” toy categories from the sidebar filter options on the main “Toys and Games” landing page. Who says boys can't play with dolls or girls can't play with action figures? Not me — and now apparently not Amazon, either. Hoorah!

In order to help shoppers sift through the insane amount of items available for purchase on the e-retailer's site, a line of filters runs down the left hand side of each department's landing page. Toggling them can narrow the field a bit, which comes particularly in handy when you're not totally sure what you're looking for. The “Toys and Games” department's filters include selections for everything from target age to the type of toy — but as of a few days ago, filtering by gender is no longer an option. Twitter user @JackDanger, who knows someone on Amazon's taxonomy team, brought this change to the Internet's attention on May 2... and you know what? It's a very, very good thing.

Want to see the change up close and personal? Your wish is my command. There's a before and after image making the rounds that shows us both exactly where the gender filter used to be, and what that section of the sidebar looks like now. Here, have at:

Much has been made over the past few years of the gendering of toys — a phenomenon that seems to be happening more and more frequently. The most commonly cited example recalls a LEGO print ad from the '80s featuring Rachel Giordano, now a practicing naturopathic doctor in Seattle. Giordano built the LEGO creation she's holding in the ad herself — and most notably, it's entirely gender neutral. The contrast is particularly notable when held up against the “LEGO Friends” line, a collection of “girly” LEGOs geared not towards building your own worlds, but towards moving static plastic figures around static plastic scenes.

Or take the Easy Bake Oven. Typically seen as a “girls' toy” these days, its default color scheme moved from turquoise or yellow at its introduction in 1963 to overwhelmingly pink. Happily, though, strides have been made recently to ungender the toy: In 2012, teenager McKenna Pope began a petition for Hasbro to produce the Easy Bake Oven in a gender-neutral color scheme after her four-year-old brother asked for an Easy Bake Oven for Christmas. Pope worried that the fact that it was only available in pink and purple — “girl colors,” in today's climate — would discourage both her brother specifically and boys in general from using it. In 2013, Hasbro unveiled a black and silver version of the toy and the world cheered heartily.

So: Is Amazon's removal of the gender filter going to solve the toy gendering problem in one fell swoop? Of course not. It's deeply ingrained in our culture right now, and it's going to take more than one tiny change to undo it all. Furthermore, as Kottke and a few other Twitter users pointed out, the categories may be gone from the sidebar… but they're not gone entirely. There are still “Boys' Toys” and “Girls' Toys” links in the sub menu up top:

Which, when clicked, lead you to landing pages for “Boys' Toys and Games”:

And “Girls' Toys and Games”:

I'm not entirely sure why Avengers toys have been reserved for boys, but hey, at least the toys on the "Girl's Toys" page are relatively gender-neutral. And as Kottke noted, “taking [gender] out of the standard list of categories is a nice first step” — which, hopefully, will lead to many others. And if we take it within the larger context of the whole issue, like the Easy Bake Oven story… well, let's just say I feel optimistic. It'll take some time, of course, but everything's got to start somewhere, right?