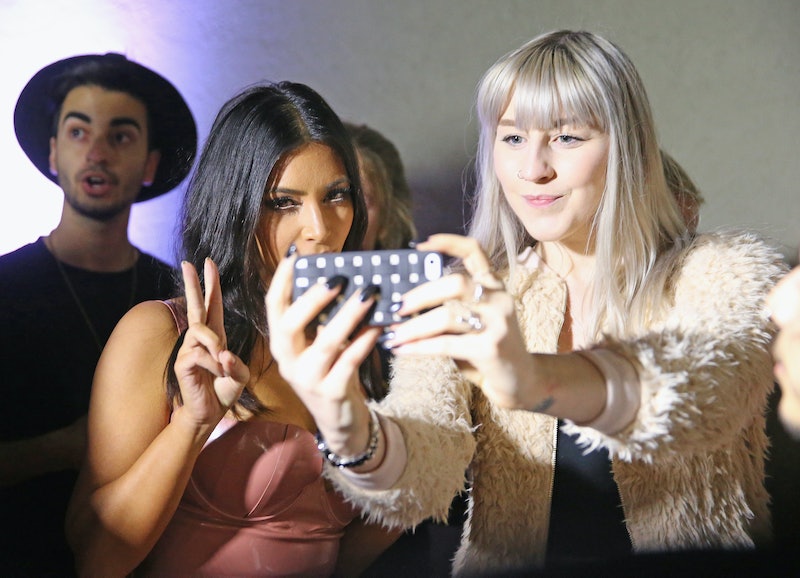 We all know the word "force" generally to mean one of two things: Either it means something along the lines of coercion or compulsion (i.e., to force someone to do something), or it has something to do with energy and physical action (like a force of nature). But lately, the word has come to be used in a slightly more nuanced way that sort of combines the two definitions for one new, super definition. What does "forcing it" mean? Let's check out the ways Urban Dictionary describes it:

Basically, "to force something" in this new, colloquial sense of the word means to over-do something, act in an overwhelming way, or behave strangely. You're not forcing anyone else to do something, and you're not a force of nature yourself, per se; you are, however, being forceful in the way that you execute something you're doing, something you're wearing, or your behavior. For example, since I have a naturally loud voice, people always tell me I'm always forcing it when I speak. I'm also usually told I'm forcing it with the sugar overload when I get an ice cream with more than three toppings.

It's important to note, however, that forcing it isn't always a bad thing, like the Urban Dictionary definitions suggest. Furthermore, you can use it to speak about yourself — not just other people. For example, you can be forcing it with a really revealing outfit and still look great and feel great. If you're wearing booty shorts and a cropped top while lounging outside, it's totally valid to be like, "Listen, I'm forcing it," which in this case means "Yeah, there's a lot going on here" — but in a positive way that reinforces your actions. It's not always bad to over-do things.

To make this more palatable, let's look at some examples of people who are forcing it in both negative and positive ways.

1. POSITIVE: Beyonce in This GIF

Beyonce is being very aggressive in her movements, which can be translated into her "forcing it," but let's be real: She's Beyonce and everything she does is perfect.

He and his characters are all always forcing it. It's not that serious, Nick.

Yes, all selfies are amazing because self-love is good, but yes, Kim Kardashian takes borderline too many selfies. As such, it would be valid if someone said she was forcing it with the selfies. However, since her love of selfies is so genuine and true that she legitimately published a book of them, she's clearly way past the point of narcissism and is not only poking fun at herself, but is also orchestrating a clever business move (because people are now going to buy it. I certainly did). In my opinion, she forces it in a good, fun way.

I will admit, "forcing it" is one of the harder colloquialisms to grasp; however, with a little bit of practice, you, too, can sound like the coolest kid on the block while calling out yourself and everyone else for forcing it. Because honestly, all of us force it every now and then.