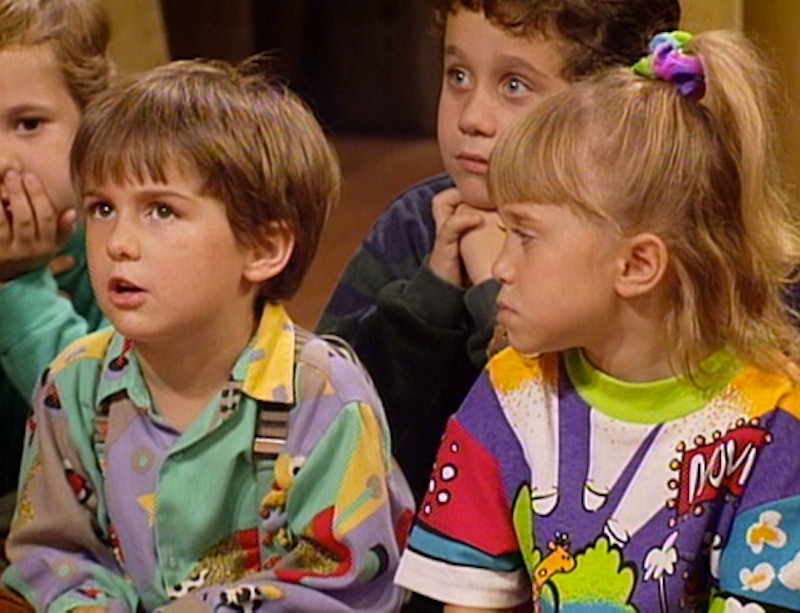 I, like most '90s kids, love Full House. I really do. I can't wait for the spinoff to happen so I can relive my childhood. But there's always been one supporting character who I thought deserved his own show, and that was Michelle's friend Aaron Bailey, the resident Full House snark master. You remember Aaron, right? He was kind of mean to the Tanner family, but he was also so cute and wore such awesome '90s clothes that you just couldn't get mad, even if he was sassing Uncle Jesse. So whatever happened to Michelle's memorable frenemy? Aaron Bailey was played by Miko Hughes, who is still acting today, just without the overalls and sass.

We first met Aaron when Michelle went to preschool. He seemed like a cool kid, definitely someone you wanted to play blocks with — until he blamed Michelle for single-handedly ending the life of the class bird. (OK, maybe he was on to something since Michelle did let the bird out of the cage...) Aaron, as young as he was, was also terrified of catching girl cooties (EW). But thankfully, Teddy (played by the wonderfully adorable Tahj Mowry) was there to defend Michelle and her snack-filled refrigerator.

So what is Hughes doing now? Well, he's still acting, but he's not that cute little pest from Full House anymore.

Right after his Full House run ended in 1995, Hughes took on another mission (HA, get it?). He starred in Apollo 13 as Jeffrey Lovell, the son of Tom Hanks' character Jim.

Hughes also worked on the animated series Life with Louie, which was based off of comedian Louie Anderson's childhood. Hughes voiced Tommy Anderson, Louie's younger brother who was often picked on.

Hughes also had a short run on Roswell in 2000 as Nicholas Crawford, the leader of the Skins. More importantly, here's a cute picture of him and Katherine Heigl hanging out.

He Has A Lot Of Horror Roles Coming Up

Is this a good way to casually sneak this photo in? From looking at Hughes' Instagram, it's obvious that he has a thing for horror. Maybe it's his way of returning to his acting roots, since before Full House, Hughes starred in the 1989 Stephen King movie Pet Sematary. And if that's not convincing enough, his upcoming projects should do the trick. Hughes has two horror films coming out within the next year, William Froste and A City of Shoulders and Noses.

If Aaron Bailey, the character, existed in 2015, I think he'd totally say this. I know Hughes is into horror, but may I also recommend comedy? And that Tinder take this suggestion?

Here are some current pics of the actor, for your viewing pleasure.

Did anyone else just suddenly forgive Aaron Bailey for his snarky ways?