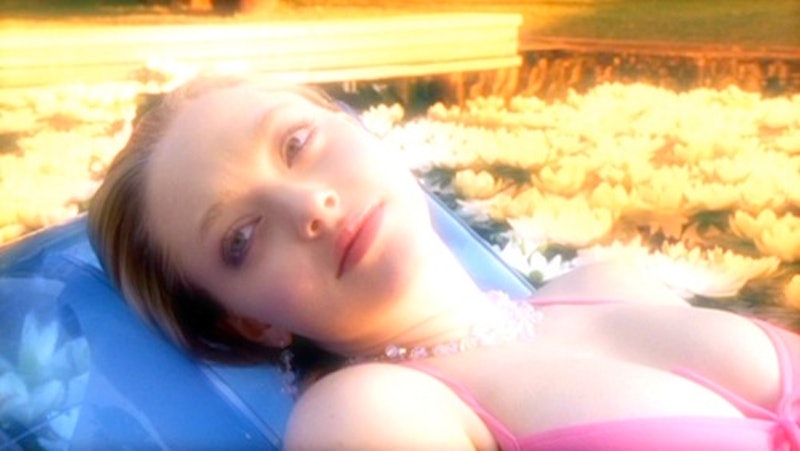 Who killed Lilly Kane? If you're still asking this in 2015, this is probably the kind of spoiler-filled post you want to steer clear of, but, more likely, that was the thought that plagued your mind back in 2004. Vivacious and beautiful, Veronica Mars' Lilly Kane was a firefly that burnt out too quickly, and her pre-series murder set the tone for the whole show. Gone but not forgotten, though: To this day, I'll still stand by loving Lilly Kane.

Of course, this means forgiving her for the terrible (and I mean it, legitimately TERRIBLE) things that she did, the things that ultimately led to her death. Boinking your boyfriend's dad (and the local town gang leader) doesn't show great character, I'll admit. It's this layer of darkness, along with the whole blonde-golden-girl-killed-before-the-series thing, that often draws comparisons to Twin Peaks' Laura Palmer.

But, while Laura Palmer kept her bad side submerged, Lilly freely flaunted her status as a wild child. Perhaps that's why I'm willing to look past a lot of her transgressions... in the end, Lilly's sparkling personality showed through, and it was evident why Veronica loved her so much.

So here's a few reasons why we still adore the immortally fabulous Lilly Kane. R.I.P., girl.

Because she was the Sass Queen of Neptune High

While Veronica always gets cred for her wit and sarcasm, Lilly's delivery was somewhat cheekier, and I kind of adore it. Of course, my all-time favorite moment is when the Mom and Pop Kane are waiting to take pictures for the Homecoming dance, and Lilly comes out, boobs akimbo, in a dress that would make a Kardashian blush. "Hey, I'm only young once. How many braless years do I have left?" she says, adjusting her dress for maximum cleavage.

She looks great even with a bloodied head

How you can go wrong with a hot blonde with gigantic blue eyes? But, even when Lilly was haunting up Duncan, hair matted with plasma — not her best self — she still looked pretty good. Or was that more of a no-meds hallucination thing? Regardless.

Maybe not the best girlfriend in retrospect, but we've covered that. There's a reason Veronica was so hung up on her murder, because of a true love between the two girls. In the glimpses we see of their relationship, you can see her trying to encourage Veronica out of her shell. "Why do you insist on suppressing your hotness?" She asks. "The world is ready for you, Veronica Mars. You don't have to blend in." Ultimately, Veronica Mars sort of breaks off from the world after the Neptune society fallout following Lilly Kane's murder. In some way or another, Lilly prepared her to be strong and independent.

This is kind of a twisted, morbid thing to think about, but honestly? What a great wingwoman, even in the afterlife.

Because she has that inescapable element of tragedy

Although Lilly was playing with fire, there's something really heart wrenching about a 16-year-old girl getting her life cut short. We ache, if only because Veronica aches, because Veronica misses her every day and her world is so much darker without her. Though we can only see that world in the rearview mirror, it's sad nonetheless.

Because without her there wouldn't BE any Veronica Mars

And, again, I'm not just referring to the woman that Veronica becomes, or the epic romance that spawned in her wake. I mean, Lilly Kane is the tie between everything in Veronica's world, and, once that tie is severed, EVERYTHING changes, making things the way they are when the show begins.