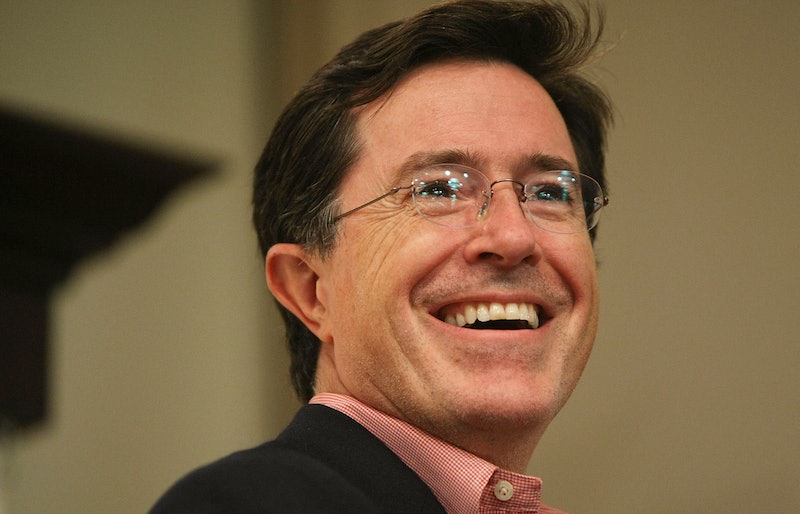 On Thursday, comedian Stephen Colbert surprised an elementary school in South Carolina with a very generous offer. The appearance was to announce that Colbert will donate $800,000 to South Carolina public schools and fund every single grant request teachers have made on the crowdfunding site DonorsChoose.org. Colbert teamed up with Share Fair Nation and ScanSource to fund nearly 1,000 projects for more than 800 teachers in the state. These requests range from dodge balls for recess to fundamental educational books.

The former Colbert Report host, who is a South Carolina native, made his announcement from New York via a live video feed at Alexander Elementary School in Greenville, South Carolina. He told the teachers, students, and administrative staff watching:

Using the proceeds from the sales of my old set on Colbert Report ... with a generous matching fund from the Morgridge Family Foundation [of Share Fair Nation] and ScanSource, Donors Choose is going to flash fund all 1,000 projects.

Colbert's news was met with applause and cheers. In response, Molly Spearman, State Superintendent of Education, issued a thank-you statement to Colbert:

I commend Stephen, Share Fair Nation, and Greenville's own ScanSource for the support that they have given the dedicated and hardworking teachers of South Carolina through this gracious gift. I know these teachers will use it in a way that improves the quality of education for South Carolina's students.

Some of the projects that the grants will fund include classroom essentials like bulletin boards and bookshelves, special equipment like a trampoline and treadmill for sensory therapy, fun items like dodgeballs for recess and gym, and important education materials like books.

This is hardly the first time the Comedy Central alum has shown his philanthropic side. Colbert has helped many causes in the past.

In March 2012, Colbert, along with fellow Comedy Central host Jon Stewart, headlined Amnesty International's Secret Policeman's Ball, an event that celebrated freedom of speech through comedy and music. Colbert may have played a conservative political pundit with deftness, but in real life, he's much more magnanimous.

In October 2012, Colbert joined an impressive lineup of comedians and musicians, including Amy Poehler, Seth Rogen, Tina Fey, and Katy Perry, for "Night of Too Many Stars: America Comes Together for Autism Programs." The cause is clearly close to his heart because he has also donated to Autism Speaks, a science and advocacy organization that helps raise awareness of the disorder.

In 2010, after BP's disastrous oil spill in the Gulf of Mexico, Colbert teamed up with Microsoft for a playful cross-promotional charity event. On an episode of Colbert Report, he asked Microsoft to donate $2,500 to his ostentatiously named The Colbert Nation Gulf of America Fund every time Colbert mentioned Bing, the Microsoft-owned search engine. He ended up name-dropping Bing 40 times, which totaled a $100,000 donation from Microsoft.

Colbert has been known to auction off his set pieces for charity in the past. In 2006, to celebrate the one-year anniversary of his show, he auctioned off a portrait within a portrait of himself, which once hung above the fireplace on his set, giving the proceeds to the charity Save the Children.

More like this
Police Shove 'Full House' Star Jodie Sweetin At An Abortion Rights Protest
By Radhika Menon
5 Ways To Stand In Solidarity With Women In America From The UK
By Sophie McEvoy
How To Fight For Reproductive Rights, Based On How Much Time You Have
By Courtney Young
The Families Of Grenfell Tower Are Still Waiting For Justice, Five Years On
By Bustle UK
Get Even More From Bustle — Sign Up For The Newsletter