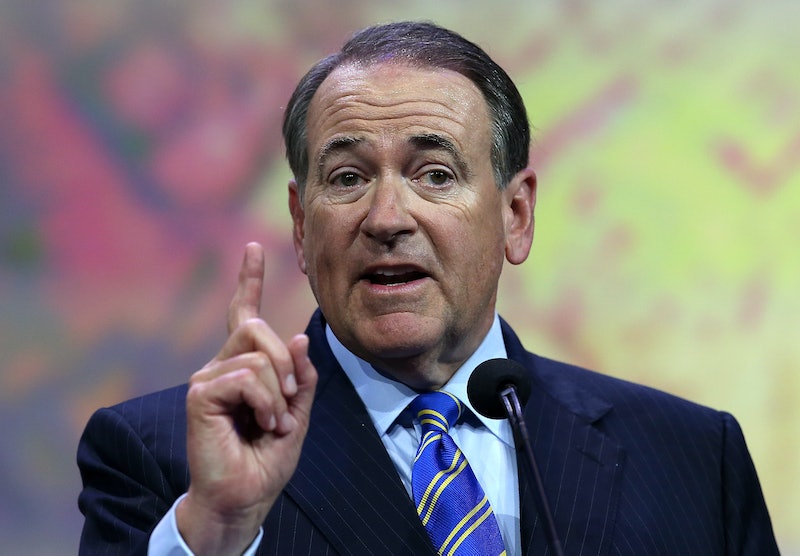 On Tuesday, former Arkansas governor, Fox News host and 2008 Iowa GOP caucus winner Mike Huckabee (R) announced his bid for the 2016 presidential republican nomination in the hometown he shares with Bill Clinton: Hope, Arkansas. Although this is not Huckabee’s first ride at the rodeo, Huckabee 2016 is sure to be different from Huckabee 2008 — but it's difficult to forget the positions he's taken on women's rights, particularly during his time as a Fox host.

Since ultimately losing the 2008 nomination to John McCain, Huckabee has not shirked away from the political spotlight. He went on to become a Fox News host and outspoken author, using his platforms to espouse conservative principles and traditional values. But the down-home charm Huckabee, the politician, dispensed to win over Republican voters during the 2008 Iowa caucuses by record margins eventually gave way to a sharper tongued Huckabee, the media personality, who often lashed out against women right’s to bolster his reputation as one of the most prominent conservative voices in America.

Huckabee has made headlines for his attacks on Beyoncé and comment on "women's libidos," but some of his most absurd remarks have flown below the radar. With his hat officially in the 2016 race, Huckabee's outspokenness on women is sure to draw attention.

Here are the six most offensive things Mike Huckabee has said about women and women’s issues since his last presidential run.

Following Huckabee’s failed bid for the White House in 2008, the evangelical Christian found a home on Fox News, where he hosted a Saturday evening hour-long show entitled Huckabee that mixed politics with culture. Huckabee also served as a Fox contributor and was often featured on many of the network’s other shows.

After leaving Fox News in anticipation of a presidential run in January, Huckabee complained of “culture shock” while working at Fox News’ New York office and singled out his former female coworkers for using “trashy” foul language.

Speaking at the 2014 Republican National Committee's winter meeting, Huckabee accused Democrats of telling women "they are helpless without Uncle Sugar" because "they cannot control their libido or their reproductive system without the help of government."

Huckabee rejected the "war on women" narrative, insisting, "the fact is the Republicans don’t have a war on women, they have a war for women, to empower them to be something other than victims of their gender.”

Huckabee Attacked Natalie Portman For Glamorizing "Out Of Wedlock Births"...

During a 2011 radio appearance, Huckabee attacked actress Natalie Portman for having a child "out of wedlock," lamenting how "it's unfortunate that we glorify and glamorize the idea of out of children wedlock." Huckabee said that it's "troubling" to see people like "Natalie Portman or some other Hollywood starlet who boasts of, 'Hey look, you know, we're having children, we're not married, but we're having these children, and they're doing just fine.'"

Huckabee later denied attacking Portman, explaining his statement, “I did not ‘slam’ or ‘attack’ Natalie Portman, nor did I criticize the hardworking single mothers in our country ... My comments were about the statistical reality that most single moms are very poor, under-educated, can’t get a job, and if it weren’t for government assistance, their kids would be starving to death.”

...And Accused Jay-Z Of Acting As Beyoncé’s “Pimp"

And in his 2013 book, God, Guns, Grits and Gravy, Huckabee criticized the Obamas for allowing their daughters, Sasha and Malia, to listen to Beyoncé (yes, he went there!) Huckabee crossed fully into offensive territory when he wrote that the superstar's husband, rapper Jay-Z, may be "crossing the line from husband to pimp by exploiting his wife as a sex object."

Huckabee Compared Abortion To The Holocaust And Slavery

Huckabee has a long history of comparing abortion to slavery. Most recently, speaking before a 2013 rally of pro-life activist in front of the Texas state capital, Huckabee compared abortion to slavery and compared pro-choice activists to slavery supporters. Early that year, Huckabee drew major backlash from organizations the NAACP and the Anti-Defamation League when he called abortion "this incredible Holocaust of our own in America."

The 2012 election may be best remembered for its dominant “war on women” narrative that found Democrats on an offensive push against restrictions on reproductive healthcare access and Republicans on the defensive from claims the Party was "anti-women." No other politician fell victim to this narrative quite as badly as Missouri Republican nominee for Senate, Todd “Legitimate Rape” Akin.

Despite the fact that numerous Republicans disowned Akin after his ridiculously false claim that pregnancies from rape are very rare because, according to Akin, "if it's a legitimate rape, the female body has ways to try to shut that whole thing down," Huckabee stood by his side, fundraising on behalf of the beleaguered candidate and even lashing out at Republican leadership for marginalizing Akin:

I’ve never seen an effort like what I’ve seen this week with party leaders coming together expressly for the purpose of taking one of their own wounded soldiers on the battlefield — and instead of coming to get him off the field and to the hospital — basically opening up rounds and rounds of fire on him, and then running over him with the tanks of the trucks, leaving him to be ravaged by the wolves of the other side.

More like this
25 Inspiring Quotes From Black Women To Celebrate Black History Month
By Kyli Rodriguez-Cayro and JR Thorpe
24 History-Making Black Women You Probably Didn't Learn About In School
By Ayana Lage and JR Thorpe
6 Organizations Fighting Police Brutality That You Can Support Right Now
By Syeda Khaula Saad and JR Thorpe
The 12 Buzziest Hair Color Trends Of 2023
By Jordan Murray
Get Even More From Bustle — Sign Up For The Newsletter
From hair trends to relationship advice, our daily newsletter has everything you need to sound like a person who’s on TikTok, even if you aren’t.