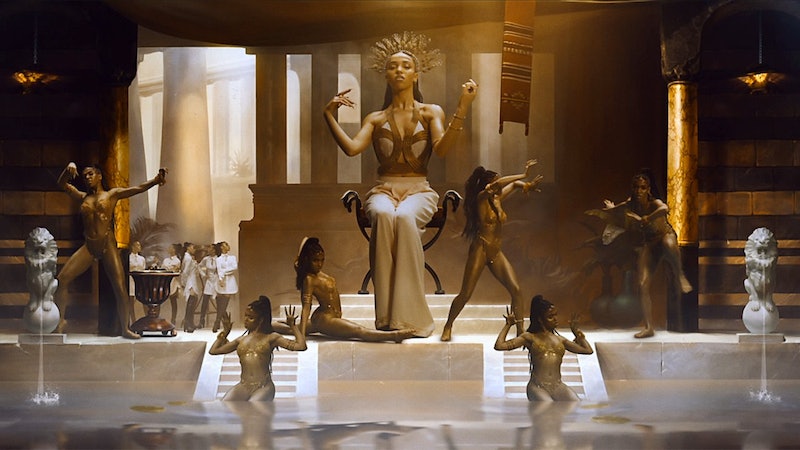 I have lived my entire sexual life as someone who knows basically nothing about the best songs to play during sex. I lost my virginity to the decidedly unsensual ska-punk sounds of Operation Ivy; and after a series of boyfriends who liked to bump uglies to the less-than-erotic music of Pearl Jam or the Harold and Kumar Go To White Castle soundtrack, I kind of gave up on the whole sex music thing. I got into running a box fan as white noise to try to keep my roommates from hearing me bone, and I dismissed the pursuit of the perfect sex song as a hopeless endeavor.

But after wading through dozens of articles recommending that I get it on to "Let's Get It On," I realized that if I actually wanted to find out what music was decent to bang to, I had to speak to the actual people banging to music. The 22 songs below were all recommended to me by real human beings who have actually had sex to them. So if you're in a sex music rut (or, like me, you never really learned about sex music to begin with), give some of the songs below a shot. Maybe you'll find something you really dig; but at the very least, you'll find something better than making sweet love to the sound of your roommate watching House Hunters International in the next room.

Recommended For: Any kind of sex with anyone at any time ever (it was voted Spotify's most popular sex song and topped a Billboard playlist of popular sexy songs, so I can only assume that 90 percent of people doing it at any given moment are doing it to this song. You're probably doing it to this one right now, aren't you?)

Recommended For: The kind of sex where you need to make a bold move to break the ice. Yeah, this song has a bit of a cheesy reputation (due to its use as the "sexy" musical queue in pretty much all movies produced in the past 20 years), but you know what else is cheesy? Setting a romantic mood; drinking wine and boning; pretty much everything good in life. Lean in to the cheese!

Recommended For: Sex that's pretty romantic but also weird and dirty (l'm imagining a set of longtime partners who decide to buy some Eyes Wide Shut masks and see what happens).

Recommended For: The beginning of a highly-anticipated sexual encounter that is going to go on for so long, you should put a vacation responder on your email.

Recommended For: Sex when you're like "Ugh, just put a baby in me already, will you?"

Recommended For: Times when you're like "The only thing that could properly set a mood for the sex I'm about to have is a lady who is basically early-period Prince."

Recommended For: Sex where you stumble home from the bar and are all over each other and are way, way past all that soft, romantic stuff, dude.

Recommended For: Sex for the first time with someone new that you like but are kind of nervous around; sex where you're role-playing being British teens from the '90s.

Recommended For: The kind of sex where you just jump all over someone right when they come in the door and totally maul them on the kitchen floor.

Recommended For: Sex when you're about to be apart for awhile and you just feel like getting really dramatic (doesn't even have to be someone you like that much! The song does a lot of the heavy emotional lifting for you).

Recommended For: Amazing sex with someone you're totally never going to see ever again.

14. "Lover, You Should've Come Over" by Jeff Buckley

Recommended For: Weepy sex (it's a thing, and sometimes it's the right choice for the moment, OK?)

Recommended For: Sex where you're almost, like, too chill to even have sex, but then you have sex anyway.

Recommended For: Sultry sex with a partner who doesn't know that you've wanted to bang to this song since you bought the Romeo + Juliet soundtrack at Sam Goody at the mall in 1999.

Recommended For: Losing your virginity at the end of freshman year of college.

Recommended For: When you're having someone over for dinner and looking for a clear transition between the "chatting at the dinner table drinking wine" portion of the evening and the "please touch my P'Zone" part of the evening.

Recommended For: When you've been banging for so long you're like "I'm not even sure I have the energy to bang any more" and then this comes on your playlist and you're like "No wait I do."

21. "Come In Alone" by My Bloody Valentine

Recommended For: For when you absolutely, positively have to make sure your roommates can't hear your doing it.

Recommended For: Sultry sex with a partner who does know that you've wanted to bang to this song since you bought the Romeo + Juliet soundtrack at Sam Goody at the mall in 1999 and is INTO IT.