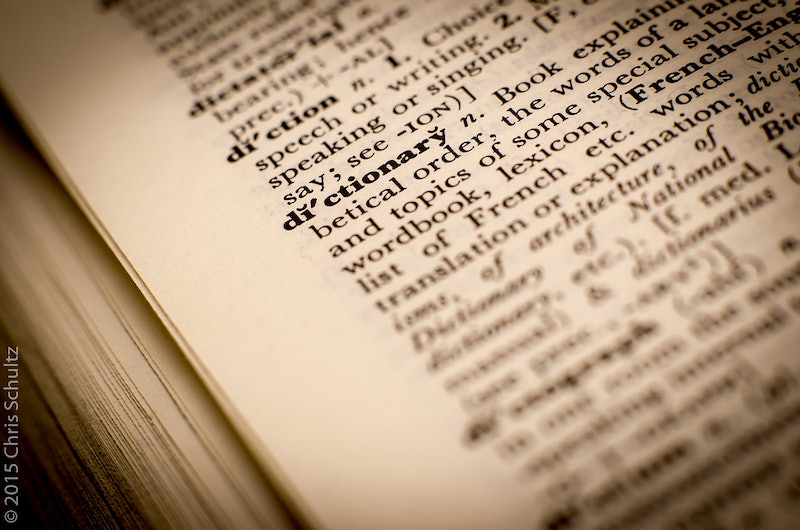 If you've ever found yourself wondering exactly what “slacktivism” means, good news: There's now an official definition for it. Dictionary.com just added a whole bunch of new terms to its vast collection of words, phrases, slang terms, and colloquialisms, which means we can all now expand our vocabularies by leaps and bounds. Aren't words cool?

Dictionary.com may not be the final word on the English language in the same that that Oxford English Dictionary might be, but it's still worth a look every now and again. It's arguably more attuned to colloquialisms than the OED (even the more casual Dictionaries, as opposed to the OED itself), and for a quick definition, it's a solid place to go. They also listen to their users, which is kind of cool; in addition to combing everything from literature to scientific articles, they also, as they wrote in their update botes, “look to our users — both directly in reviewing user suggestions and indirectly by analyzing words they look up that do not yet have definitions.” Well played, Dictionary.com!

Some of the new words? They're pretty awesome, and it's great news that they've made their way into our collective vocabulary. Other ones? They're… not so awesome. In fact, I kind of hate that they're enough of a problem so as to need words of their own in the first place. The new additions are a mixed bag, so while there are plenty of things to celebrate, there are also a few that reveal to us the darker sides of ourselves.

Although maybe even that's a good thing. If we see behavior awful enough to have to define it, that's the first step towards recognizing it's a problem — and once we've recognized it's a problem, then we can work on solving it.

Here are what I think are 10 of the most notable additions; Dictionary.com's blog post on the new words has a bunch more, and the Daily Dot assembled a few others, so head on over there to see what else is new.

Definition: Relating to a person who does not have a specific gender identity or recognizable gender expression.

Definition: Anecdotal evidence based on personal observations or opinions, random investigations, etc., but presented as fact. To be clear, personal experience is definitely still worth talking about — but if you're going to bring it into an argument, A) you have to identify that it's anecdata, and B) you have to acknowledge the fact that your experience may not be the same as someone else's experience. We can't draw wide-reaching conclusions from anecdata.

Definition: Characterized by predictable or unoriginal style, interests, or behavior. Then again, given the prevalence of the term “basic” last fall, you don't really need me to tell you this, do you? We've all been basic'ed out for a good long while already.

Definition: Relating to a person who has two gender identities or some combination of both. I still don't think gender is a binary myself, but I imagine this term will be useful for a pretty substantial number of people.

Definition: To publish the private personal information of (another person) without the consent of that individual. This is a terrible thing to do to someone. Don't do it.

Definition: Relating to a person whose gender identity or gender expression is not fixed and shifts over time or depending on the situation.

Definition: Relating to information on an electronic screen that can be understood quickly or at a glance.

Definition: A subtle but offensive comment or action directed at a minority or other nondominant group that is often unintentional or unconsciously reinforces a stereotype. It goes hand in hand with casual racism, casual sexism, and pretty much every other casual -ism you can think of.

Definition: Sexually suggestive images of someone, typically a former romantic partner, that are posted online without the person's consent. Like doxing, this is a terrible thing to do someone. Also, it will land you in very hot water, legally speaking. Don't do it.

Definition: Actions taken to bring about political or social change but requiring only minimal commitment, effort, or risk: students engaging in slacktivism by signing an online petition.