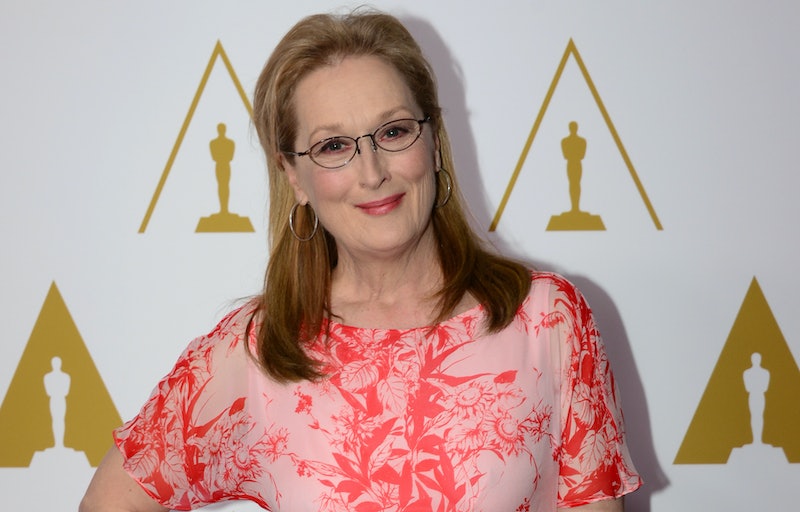 We're all in agreement that Meryl Streep is the best living actress and certainly one of the best ones in history, as well, right? There's nothing this queen can't do; she can play politicians and rabbis, witches and famous chefs... and everything in between. Simply put, Streep is amazing at her craft, and there's not really anything we can do but sit back in awe and take in her genius as she lavishes it upon us in some pretty amazing films. The next time she hits the big screen, it'll be as a hard rocker in Ricki and the Flash, which also happens to star her real-life daughter Mamie Gummer as her on-screen offspring. And while I can't wait to see it, I also can't help but continue to rewatch so many of the amazing movies Streep has already done.

Streep started her acting career back in 1975, working on TV before making the leap to film soon after. In the 40 years since — yes, she's been working in Hollywood for 40 years — she's amassed an incredible 74 acting credits, which is on small feat. While you've likely seen quite a few of her projects, there are some that are simply not to be missed. So the next time you're ready to hunker down for a movie night, there are 9 Streep films that MUST be on your list. And really, only picking 9 seems almost criminal, but for the sake of brevity... here we go.

Sure, this is really Woody Allen and Diane Keaton's movie, but whatever — Streep stole the show, in my book. Streep plays Jill, the lesbian ex-wife of Isaac and a writer planning a tell-all book about their split. I don't want to spoil too much about it, but this movie is so good in every single way.

If you haven't seen Death Becomes Her, you truly haven't lived. A woman who wants to become immortal to outdo her nemesis? SAY NO MORE. Goldie Hawn and Bruce Willis are also in this one, so you're basically in for a triple treat.

I truly don't have words for how much I love Angels In America. HBO aired the mini-series — which comes in with a 7+ hour running time, so be forewarned — over 10 years ago, and it still stays with me to this day. It's based off Tony Kushner's play of the same name and so much happens that I can't begin to give you a synopsis, but Streep plays several characters, including a male rabbi and Ethel Rosenberg and she's amazing. The entire cast is stellar, though, and it's well worth watching.

This movie is pretty intense and emotional, I won't lie. It deals with a couple who splits and the father is left to take care of their son by himself, and then later defend his right to custody in court. It's a tough film to watch, but also a really, REALLY great drama.

I'll be honest — I only ended up seeing this movie because I was part of the press junket that included a screening and a Q&A panel (so yes, I observed Meryl IN THE FLESH), and I'm so glad I did. It's based on a play, which is always pretty tough, but the film manages to be thoughtful and beautiful and again, really emotionally difficult to watch... but you'll be thankful you did. This is another one with an all-star cast, as well. Julia Roberts, Dermot Mulroney, Juliette Lewis, and Margo Martindale are just a few of the other stars, so you KNOW it's good.

This is a TRUE STORY about Karen Silkwood, a woman who worked at a plutonium processing plant and was downright tortured (and possibly even murdered) to keep her from exposing the terrible conditions in the workplace. Are you getting the feeling that this is another hard to watch drama? Ding ding ding! But a darn good one, for sure.

Whoever thinks Streep can't do comedy needs to check themselves before they wreck themselves, and then watch She-Devil. It's about a woman (Roseanne Barr) who vows to get revenge against her husband after he starts an affair with a rich novelist, played by Streep. It's hilarious and amazing and basically a great palette cleanser after you watch all the tough stuff.

This is another movie I wasn't sure I would like but that I'm really glad I saw. Streep and Tommy Lee Jones are a couple whose 30-year marriage has gotten strained and not that great. They agree to go to couple's therapy and their therapist, played by Steve Carell, encourages some... unconventional treatment. It's really honest and heartwarming and totally not just for old people, which is admittedly what I'd first thought about it before seeing.

Admittedly, The Hours came out while I was at the height of my emo stage (i.e. freshman year in college) and I LOVED IT. Virginia Woolf references? Check. Debilitating depression? Check. It's so, so good. Streep plays the current-day woman (Julianne Moore is from the '60s and Nicole Kidman is Woolf herself) and it's a big old mess... but in the best way.