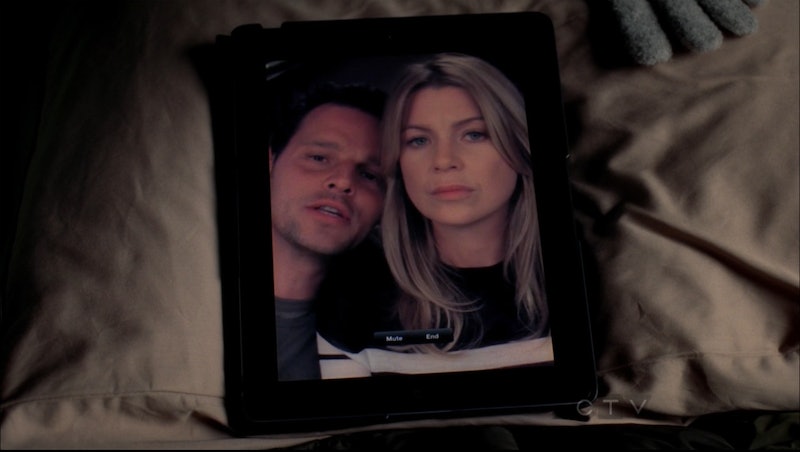 Last week on Grey's Anatomy the writers sowed the seeds for a new relationship, and this week Meredith Grey and Alex Karev got one step closer to being an item It may seem like too soon for Meredith to move on, but we all have to remember that the show had a time jump so it's actually been a year since Derek died. Fans aren't down with the idea of Mer hooking up with her fellow surgeon, though. An E! Online poll reports that about 75 percent of fans think it's a terrible idea. But, I'm sure about 100 percent would have said killing Derek was a bad idea, and Shonda Rhimes still did that.

There were a few hints last week that the writers might take those characters in that direction, and this week's Grey's Anatomy only confirmed that. Last episode we learned that Alex Karev is Meredith's emergency contact (aww), and he was the only one she called when she was on the run for a year. Then, this week, she asked to move in with him. (Her house reminded her too much of Derek, and technically Alex's house is Meredith's old one anyway.) But her moving in isn't the only hint that she and Alex are getting closer.

Alex's relationship with Jo Wilson is on the rocks. She mentioned wanting the two of them to join Owen Hunt to help overseas in the war zone, and he flat out told her no. He said he had finally put down roots in this city, but also he didn't want to leave because of Meredith. "Mer is home, and I finally feel like things are good," he told Jo. She seemed less than thrilled by his unwillingness to go with her, and things aren't looking good for the two of them.

Are the writers getting her out of the way so they can see how things play out between Alex and Meredith? Fans may not want it to happen, but, like it or not, the signs are there — we're just along for the ride.