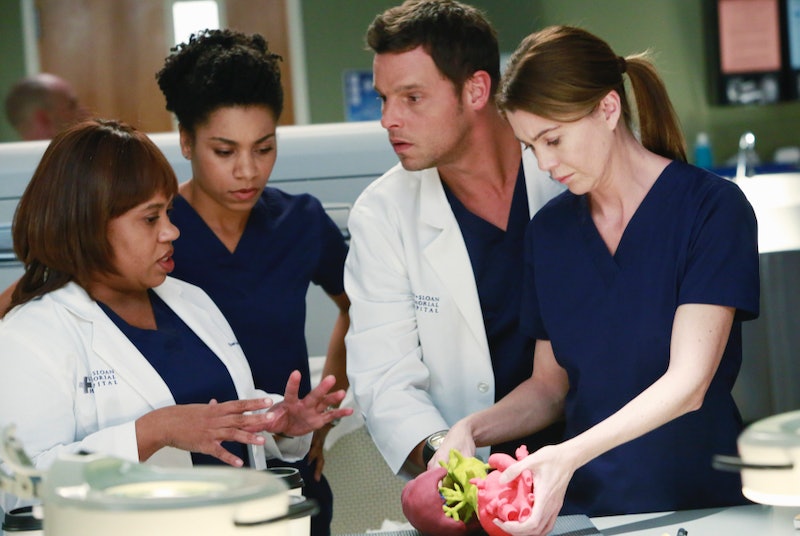 It's a mad, mad, mad, mad world. Either that or I must be having a very long and very bad dream, because there's no way that our kind, talented, handsome McDreamy would be gone in a fair and sane universe. And yet he is — we all said our tearful goodbyes when Derek Shepherd died on Grey's Anatomy two weeks ago... and have been living in a bizarro universe ever since, where beloved main characters are killed off with the fickle drop of the proverbial ax, those deaths are followed up with strange, time-jumping, two-hour episodes that barely focus on said death, and the widow might be moving on with her best friend. *record scratch* Wait a second, could Grey's Anatomy seriously have Meredith and Alex hook up?

Now, before you light your torches and grab your pitchforks, let me make it clear that I'm not a proponent of this potential relationship... especially not two episodes after Derek's death. (Sure, it's technically been a year on the show now, but still. Too soon.) But unless I'm crazy, I've seen more than a couple clues lately that are at least hinting at the possibility. Maybe Shonda Rhimes is just messing with us and keeping us on the edge of our seats before taking Meredith's storyline in a different direction. However, right now Meredith and Alex seem destined for a romantic relationship. Maybe not in Season 11's final two episodes, but perhaps sometime in Season 12.

Here are just some of the clues pointing towards a Meredith/Alex pairing.

In Season 8, Grey's aired an episode that took place entirely in a strange parallel universe, where Ellis had never had Alzheimer's, Bailey was still a shy intern, Callie and Owen were a couple, and Alex was the Chief Resident... and engaged to Meredith! We watched a nerdy, bespectacled Alex make out with Dr. Grey and we watched a decidedly not-dark-and-twisty Meredith giggle like a schoolgirl. It was weird. But what if it was more than that? What if it was foreshadowing?

Remember how during the opening of the Season 5 premiere, Meredith was standing in the house of candles when they started blowing out? Next thing we know, she's running into the emergency room where she learns that DEREK HAS DIED IN A CAR ACCIDENT. Of course, it was all a dream, but it's chilling to think about now that we know Derek's eventual fate. The point is, Rhimes is serious about her foreshadowing, you guys.

(Of course, Alex ended up cheating on Meredith with April in that universe, so even if they do get together in real life, maybe it won't work out.)

She Thinks His Junk Is "Spectacular"

Meredith wasted no time in declaring Alex her new "person" after Cristina moved to Switzerland in the Season 10 finale. The two have been growing closer ever since. In the scene from early in the season above, she even saw him naked in the shower and remarked that his junk was "spectacular." (In fact, it was this interaction that made me wonder about a potential Meredith/Alex romance in the first place.)

Sure, the scene was played for laughs, but Meredith's casualness around Alex's naked body does speak to a certain intimacy between the two former interns. Meredith has known Alex longer than pretty much anyone else on the show at this point. If Rhimes were to pair up her leading lady with a new love interest, it's easy to see the temptation to make that love interest someone Meredith already has an established relationship with, rather than some stranger viewers would have to spend time getting to know.

Wasn't it a little strange that in a two-hour episode that spanned a year in Grey's Anatomy time barely showed Alex with his girlfriend? If I remember correctly, the only time they were even onscreen together was at Thanksgiving, and even then they were around other people. If Rhimes is starting to lay down the foundation for a Meredith/Alex pairing, it makes sense that she would also want to start distancing Alex and Jo.

The most on-the-nose moment that made many viewers wonder "Are they going there?" came after Meredith gave birth, and the nurse told the new mom that her husband was there. It turned out to be Alex, who was listed as her emergency contact, but the context made it impossible not to wonder if that was a hint.

Rhimes has shown an interest in foreshadowing more recently than the Season 5 premiere, too. Just one episode before Derek died, Amelia berated Meredith, telling her "You’ve never lost the love of your life. You’ve never cried over the body of the person you love most in the world." It's like the showrunner is telegraphing future plot developments for those who are paying enough attention.

They're The Only Combination Left

Season 1's original group of interns have slept together in almost every combination. With the exception of Cristina, who remained removed from the inter-intern romances while paired with Burke and then Owen, the other four colleagues all got busy with each other. Meredith slept with George, George slept with Izzie, Izzie slept with Alex. Now, the only combination needed to bring the group full circle is for Alex to sleep with Meredith. After over a decade on the air, is it finally time to explore this last remaining couple?

Rhimes Is A Fan of The Idea

If Rhimes does "go there," she can expect plenty of outrage from her audience. E! Online recently conducted a poll asking fans how they felt about the potential pairing, and an overwhelming 74.5 percent answered that it was a terrible idea. But here's an interesting wrinkle: when E! posted the above tweet about fans 'shipping Meredith and Alex, guess who "favorited" it? That's right: Rhimes herself. If Rhimes "likes" the thought of fans shipping these two characters, that certainly seems to imply she's got some plans in store for them.

Thanks to one time-jumping episode, it's now been a whole year since Derek died. Is Meredith ready to move on with Alex? We've got two episodes left in the season to find out.