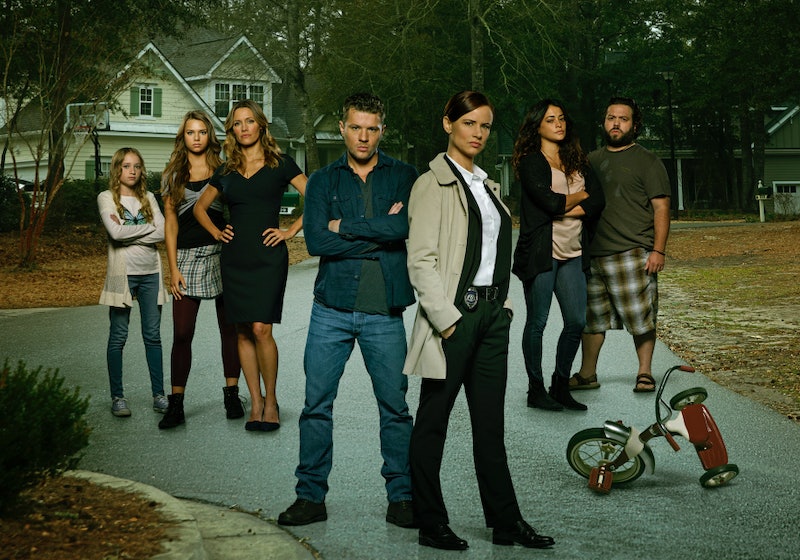 The mystery continues. Even though ABC has officially renewed Secrets and Lies for a second season, there are still several burning questions about Tom’s death. The Season 1 finale showed Ben taking the fall for Tom's death even though Abby killed Tom. He did it because she told him that it was an accident and he wanted to protect his family. But it also showed us that there’s so much more to Abby’s story and Abby herself than we could have ever imagined. The original Australian series upon which Secrets and Lies is based ended with Tom’s killer being Ben’s younger daughter as well — Ella was her name in that version. But are the details in the two versions exactly the same? There are a lot of loose ends still to be tied up about Tom’s murder and the future of Abby.

So why did Abby kill Tom in the first place? What was her motive? And what did she mean with her beyond creepy line about getting Tom "to the river”? Being that Secrets And Lies is a limited series, meaning it will tell a different story next season (likely why Ryan Phillippe is not slated to return for Season 2), some questions may go unanswered, but some of these questions aren't so hopeless and at the very least we can make some educated guesses based on what we’ve seen so far and the show's similarities to its Australian counterpart.

We don't have an exact answer to this question. All we know for sure is that it wasn't an accident caused when Abby tried to get Tom to run away so that his father Scott would come back to look for him. That story was completely made-up by Abby: The murder was clearly done out of malice. But we can glean the answer from what happened in the original series and from Detective Cornell's theories.

In the Australian series, Abby's counterpart Ella killed Tom because she had a psychological problems which made her obsessively fear that her father would leave the family for Jess. So she killed Tom thinking it would make Jess move away or get her charged for the murder. It seems like the motive for Abby is most likely the same.

No way. I truly can't believe that Jess would help Abby do this. First off Abby would have tried to blame everything on Jess if Jess had any involvement in Tom's murder, including pinning Abby's bloody shoes on Jess which normally would implicate Abby in a second. No, Cornell's theory is much more likely: She's being framed. And the culprit is definitely Abby.

Burning Question 3: What Did Abby Mean With Her "Gotten Tom To The River" Line?

We can defer to the original series for this answer. In the Australian version, Ella's original plan was to get Tom to drown in the river so the tragedy would make Jess want to move out of town. That way Ben would never be tempted to leave the family for Jess. When she couldn't get Tom to the river, Ella improvised but hoped the outcome would be the same. This is also Abby's motive as she says "I was sure Jess would move away" before adding the line, "None of this would've happened if I had gotten Tom to the river."

Cornell is right, Abby is on her way to becoming a straight up serial killer if she isn't caught soon. But considering that Season 2 may take on a different story entirely, we may never know how it turns out.