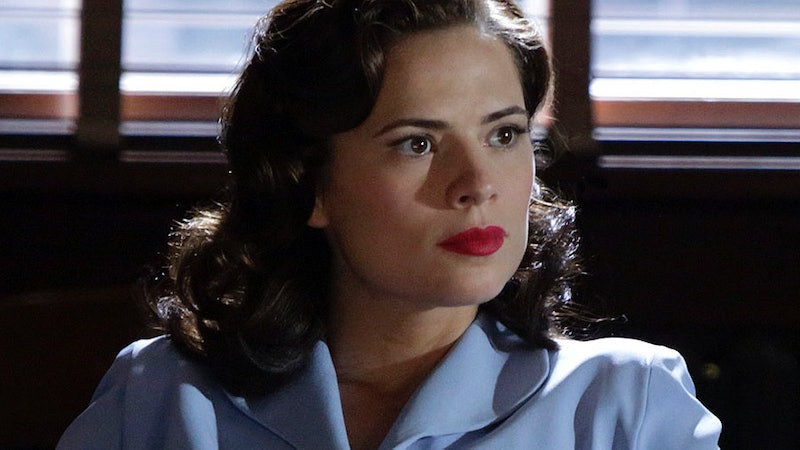 It would be embarrassing for me to admit that I genuinely melted into my seat in relief when I saw the news that Marvel's Agent Carter is renewed for Season 2 on ABC. I had almost give up hope that the incredibly feminist show starring Hayley Atwell as the uber popular former love interest of Captain America, Peggy Carter, was a show that anyone believed in as much as I did. While Agent Carter does have its diehard fans, the ratings for the show were soft enough that there was real doubt we would ever get to solve half of the mysteries that the show introduced during its first season. But we can now rest easy, and, even more importantly, celebrate the fact that Agent Carter's feminism and action-packed excitement won't be torn from us forever. However, this is not a gift that we should be taking lightly.

Unlike its counterpart DC, Marvel has been notoriously slow in diversifying its roster beyond the White Males Probably Named Chris formula that has been working for them at the box office with hits like Captain America, Thor, and Guardians of the Galaxy. Oh, sure, we have Marvel's Agents of S.H.I.E.L.D., which started us off with a team that was fairly even gender-wise and even featured women of color like Skye and Melinda May, but a show or film that is actually led by a woman or a person of color has been rare and long in coming. We're still waiting on Black Panther and Captain Marvel, after all, and don't even get me started on that nonexistent Black Widow movie.

And that is where Agent Carter stood unique among the rest. This was a show starring a woman, about women's issues, that was for both men and women to enjoy. It followed Peggy Carter in the world after the war, the world after Captain America, in which she had to realize that just because she was a respected and invaluable soldier during the war effort didn't mean that anyone cared what a lady had to say when the fighting was done. She had to struggle with the fact that fighting did not gain her any respect among the general populace — an issue that is, unfortunately, commonly faced by war veterans who return home with a lack of job prospects and some of whom end up on the streets — and that, even when she did get that respect, she still lived in a society that would rather give all the credit for her heroic actions to her male counterparts.

Much of what Peggy went through in the series reflects very real issues that are still faced by many women today, except in less overt ways. We're still being paid less than men for doing the same job. It's still harder for us to receive promotions in the workplace over our male counterparts. We might live in a world where it's illegal for someone to outright tell us that we're not getting what we've worked hard for because we're women, but that doesn't mean they can't deny us what we've worked for without pinpointing that as the reason. In some cases, sexism is so internalized that they don't even realize that's the reason. All of this is horrifically sad, but it's also the reality that women deal with every single day of their professional lives.

Then you have a show like Agent Carter, which took those issues and magnified them to reflect Peggy's extraordinary circumstances. She survived a war. Hell, she thrived in it. She fell in love with the symbol of truth and justice, then lost him before their relationship could go anywhere. She lost everything when the war was over — her very sense of purpose — and she's forced to endue a life that is unsatisfying to her both professionally and personally as she tries to find new footing in the world. She might be a woman, and much of what she deals with might be unique to women, but it's a very human experience. Feeling lost, feeling unappreciated, feeling disrespected no matter how hard you work for approval... anyone can relate to Peggy's story, and that's what made it so poignant.

Sure, Agent Carter might not have had the amazing ratings of other ABC shows, but it's so important that they chose to renew it, to give it a chance. Agent Carter stands out in current Marvel media as its only female-driven show and its success might be the inspiration that Marvel needs to add more female-driven shows (and films, please films!) to its roster. Agent Carter, Captain Marvel, and Black Panther are one thing, but — even Black Widow aside — Marvel has a wide variety of female superheroes who would be deserving of their own shows and movies. Scarlet Witch, a fan-favorite from Avengers: Age of Ultron, is already on my short list of female heroes who could lead their own films. The atmosphere of TV and movies is changing to reflect the fact that women deserve to see heroes who look like them on screen as well, and Agent Carter is one powerful step forward.

More like this
Everything To Know About 'And Just Like That...' Season 2
By Jack Irvin and Grace Wehniainen
'The Last Of Us' Episode 4 Put Twitter Into An Emotional Spiral
By Alyssa Lapid
Wait, Is 'Happy Valley' Not Actually Over?
By Darshita Goyal
'Happy Valley's Ending Was *Almost* Entirely Different
By El Hunt
Get Even More From Bustle — Sign Up For The Newsletter
From hair trends to relationship advice, our daily newsletter has everything you need to sound like a person who’s on TikTok, even if you aren’t.