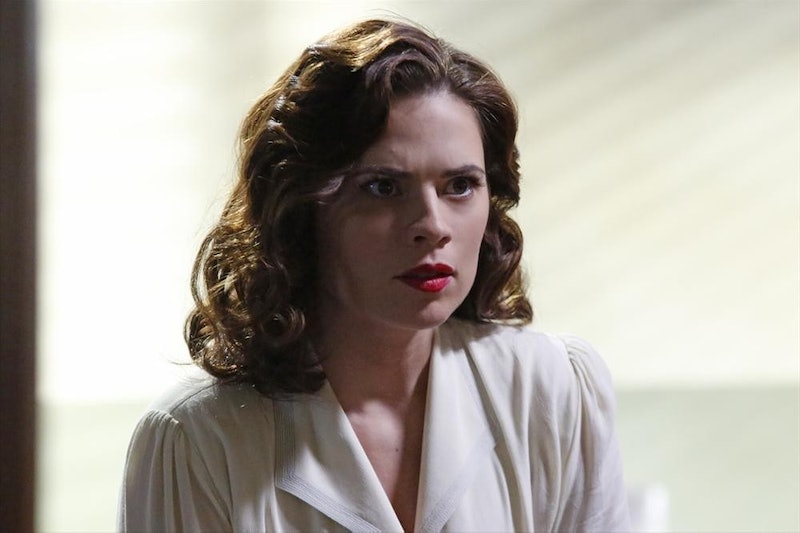 The first season of Agent Carter is drawing to a close and I am already desperate for more. The tone is fun, the characters are interesting, and I can just tell that there is so much more story to be told from this era of Marvel history. If Agent Carter is renewed for Season 2 (which it so deserves), what types of stories could it tell? We still don't know whether or not that will happen. Agent Carter is a limited series, but unlike Once Upon A Time In Wonderland, its ABC predecessor, this show is not expected to wrap everything up with a "happy ending" bow in the season finale.

The first season took place in 1946 and Agent Carter is quickly moving into a fascinating part of American history as well. The Cold War is only getting started. We've seen hints of that, with the villain focus shifting from Nazi Germany to Soviet Russia. It's just like Indiana Jones in that regard. That said, I would be fascinated to see how the SSR, the future S.H.I.E.L.D., and spies like Peggy Carter fare against McCarthyism. Howard Stark has already been called a traitor. Just wait until 1947, when the Hollywood Ten are Blacklisted, the Truman Doctrine goes into effect, and Jackie Robinson signs a contract with the Brooklyn Dodgers. What will the SSR and Peggy Carter do during the Korean War, which started in 1950? The Marvel Cinematic Universe films have done a fantastic job commenting on current events. This is their chance to really dig into history and find something new to say about the past.

That said, here are some of the comic book characters and plots that I would love to see if Agent Carter gets a second season. Granted, I'd happily watch a whole show about Peggy and Jarvis, but I guess they have to do things and talk to other people at some point.

If Agent Carter gets a second season, we absolutely have to meet Janet Van Dyne, also known as Wasp. She is a founding member of The Avengers who has been conspicuously missing from the Marvel Cinematic Universe. She is connected to Hank Pym, the first Ant-Man, but won't even be in the Ant-Man film. Instead, Evangeline Lilly is playing her daughter, Hope Van Dyne. However, Peggy Carter and Howard Stark (played by John Slattery this time) will appear in an Ant-Man flashback, so it springs eternal that Hope's mother will be on the Agent Carter scene.

Another female character that could be introduced, a villainess, is Viper/Madam Hydra. She started out as a founding Leviathan agent and crossed over to Hydra. Unless I've just uncovered Dottie Underwood's secret identity without realizing it, this is a character we need to see and Season 2 would be perfect. In the comics, Madam Hydra is at odds with Sharon Carter, who is sharing a bit of history with Peggy in the Marvel Cinematic Universe thanks to the new timeline. There are, in fact, plenty of Leviathan agents that should be introduced on this series. So far, the organization has seemed pretty leaderless. What gives?

Finally, we can't forget about Gabe Jones. Actor Derek Luke may be on Empire right now, but his character is important in Marvel history. Not only were Gabe and Jim Morita not with the rest of the Howling Commandos when they went to Russia in Season 1 of Agent Carter, but Peggy and Gabe dated in the comics for quite some time.

Agent Carter the series takes place before the Marvel One-Shot: Agent Carter that started it all. This means that at some point, Peggy Carter is going to go work for Bradley Whitford. It may be difficult to get those actors and make that happen, but hopefully a second season could just acknowledge it. The One-Shot ends with her going to form S.H.I.E.L.D. with Howard Stark and Dum Dum Dugan. The "is Howard Stark a traitor?" arc has been fun and all in Season 1, but the hypothetical Season 2 could really get into the nuts and bolts of how to make a secret spy organization.

There are also plenty of rich Marvel Comics storylines that the series could draw from. There is a whole arc about a Captain America copycat who tries to become Steve Rogers using surgery, and is at one point hypnotized to become a bigoted dictator. That would be a fun Season 2 story — it reminds me a bit of Anastasia. Peggy was also tortured at one point and suffered some memory loss. That's classic "Season 2" material for any series.

New villains could include an offshoot of Hydra called the "Secret Empire." The Red Skull, Captain America's first Big Bad, never really goes away for long in the comics. He becomes a Communist dictator. You gotta keep up with the times. Hugo Weaving might have some free time now that The Hobbit is over. Wait, The Hobbit movies are over, right? There aren't three more? Just checking.