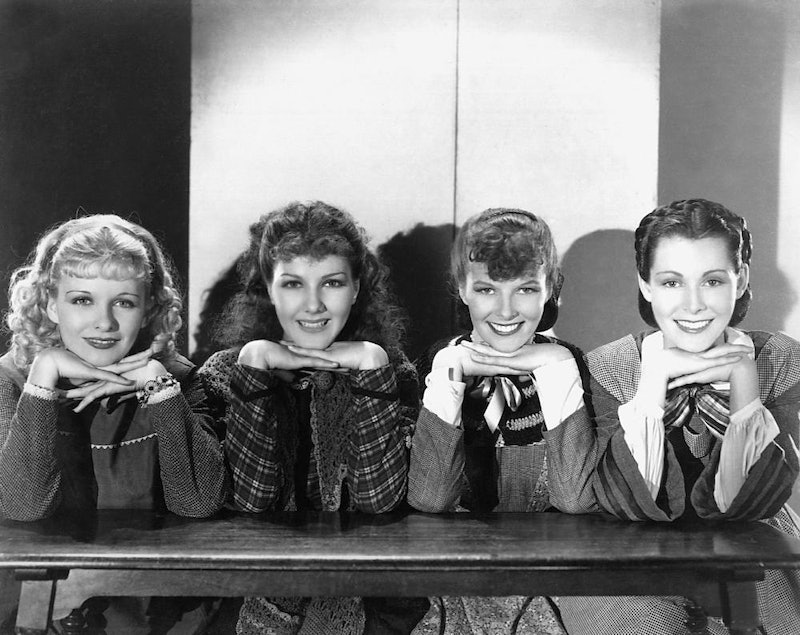 Ever notice how so many of the best literary heroines we know and love seem a little lonely? Here they are going through novel-worthy adventures and sorting through marriage proposals, but most of them don’t have that crucial element in any woman’s life — a solid, tell-you-like-it-is best friend. And half the time, when they do have a female friend in their lives, that friend turns out to be of the conniving, jealous, back-stabbing variety.

There are, of course, the lucky few, like Jo March, who has a plethora of sisters to confide in. But sometimes, a sweet, supportive sister just can’t give you the swift kick in the head like your no-nonsense bestie can. Think of how crucial Charlotte Lucas’ knowing insight was to Lizzie Bennett when she couldn’t share everything with her sweet sister Jane.

Meanwhile, Sherlock’s got his Watson, Pip has his Herbert, Athos, Porthos and Aramis are one big sword-fighting bro-love fest. There aren’t a lot of "bro"-mances among the women (we totally need our own word for that, BTW) of literature, but that doesn’t mean it takes a lifetime of friendlessness to make a dope literary heroine. Women certainly have awesome friendships in real life, so where are all the positive women's relationships in popular literature? Well, until depictions of female friendship become more common, we can at least dream up a few bestie-ships between some of our favorite literary heroines. If they could jump across genres, books, continents and eras to meet each other, I'm betting some of them would hit it off in seriously epic ways.

Since I happen to be an expert matchmaker, here are a few attempts at some literary BFF matchmaking:

Moll is a bit more ruthless than Becky (with the whole conning, thieving, abandoning her kids thing), but they both know exactly what they want and pursue it mercilessly well into and beyond their “old-maid” years. By the time they’re settled, they’ve both been through the ringer and a string of men, leaving with a whole helluva lot of stories to tell. Couldn’t you imagine them getting together at a fancy cafe to loudly brag about their exploits... and then skip out on the bill?

The only problem with this bestie pairing is that if Hermione and Meg had met first, it’s super likely she would’ve just rolled her eyes at Harry and Ron and went off to be all brainy and awesome with Meg Murry. Just think of how many times Ron and Harry would have been totally screwed without Hermione?! This nerdy fem-ship might have spelled disaster for Hogwarts. But then again, with two (delightfully nerdy) genius girls like them joining forces, they probably would’ve resolved everything with a spell and a math formula in the first book.

OK, this one is a little weird, I know. But, if you think about it, it also makes tons of sense. Besides the fact that Blanche DuBois is a little crazy, and Miss Havisham is a little crazy... Miss Havisham also might be the only person that Blanche DuBois could drop her guard around. Havisham knows a thing or two about getting older and how horrible men can be. Havisham would probably love to take pretty Blanche under her wing, teach her how to ruin men, and give her some nice silks or something, so poor Blanche wouldn’t have to worry so much about trying to keep up appearances in her wrinkled evening gowns. With Blanche’s moxie and Havisham’s school of cruel charm, the two could hatch brilliant schemes to bait and ruin as many men as they pleased.

The biggest thing Katniss and Jo have in common is that they’re both completely uncharming. They’re both hot-tempered, stubborn, kind of rude, and completely devoted to their much sweeter siblings. Aside from being a shoulder to cry on (since they both know loss pretty intimately), these two could also help each other recover. Just imagine poor, traumatized Katniss invited to a family dinner at the Marches, lavishing the young Marches with attention, and giving Jo secret low fives every time she let some blunt opinion slip out. And, naturally, the best thing to come out of this friendship would be The Life and Wars of Katniss Everdeen by Josephine March.

These two brainy idealists really know how to screw things up. But after they’ve grown up a little, they’d probably appreciate the chance to get together and pick each other’s brilliant brains for awhile. They’d be that pair of friends you overhear at the coffee shop getting way too excited music theory, or owning up to their own huge flaws and mistakes with a bottle of wine and a little humor.

Emma has a thing for impressionable girls who look up to her with stars in their eyes, and she likes nothing more than dishing out her own naive advice. Sansa was practically born with stars in her eyes and she the girl could seriously use some advice, or at least a mother hen to stop her from making all those horrible, horrible decisions. These two would be connected at the hip and would probably have sleepovers and dress up as their favorite Game of Thrones queens. And, of course, Emma would certainly set Sansa up with some better bachelors too… not that the Sansa Stark standard is hard to beat.

Sethe and Celie have had some seriously awful pasts. Both suffered unthinkable loss and pain, but both also conquered their pasts and went on to be amazing women. Celie learned how to love again by forming her own unique family. Sethe could use a lesson or two in motherly love as she works towards redeeming herself to her daughter Beloved, and Celie seems like just the person to help with that. There’s no pulling punches when you’ve suffered like these women have, and Sethe and Celie would definitely be the kind of no-nonsense friends who tell each other like it is.

Don’t you think Lucy and Marianne would make an awesome (and really pretty) dueling piano duo? They’re both passionate musicians, but they’d also make great friends. Marianne is all passion and emotion and drama, and Lucy needs someone just like Marianne to get her to let loose a little. Plus, how much would Marianne love finding excuses to visit Lucy and George in Italy and steal Lucy away for a debaucherous girls’ night out. We’ve all got at least one of these friendships, the ones that leave you exhausted and hungover, but full of amazing stories.

More like this
This Episode 6 Moment Foreshadows Viserys' Fate On 'House Of The Dragon'
By Grace Wehniainen
Nicola Coughlan Shared A Lady Whistledown Excerpt From ‘Bridgerton’ Season 3
By Grace Wehniainen, Alyssa Lapid and Sam Ramsden
Read The First Pages Of Emma Rosenblum’s Highly Anticipated Debut, 'Bad Summer People'
By Samantha Leach
The 50 Most Powerful Characters In The Marvel Universe, Ranked
By Johnny Brayson and Nola Pfau
Get Even More From Bustle — Sign Up For The Newsletter