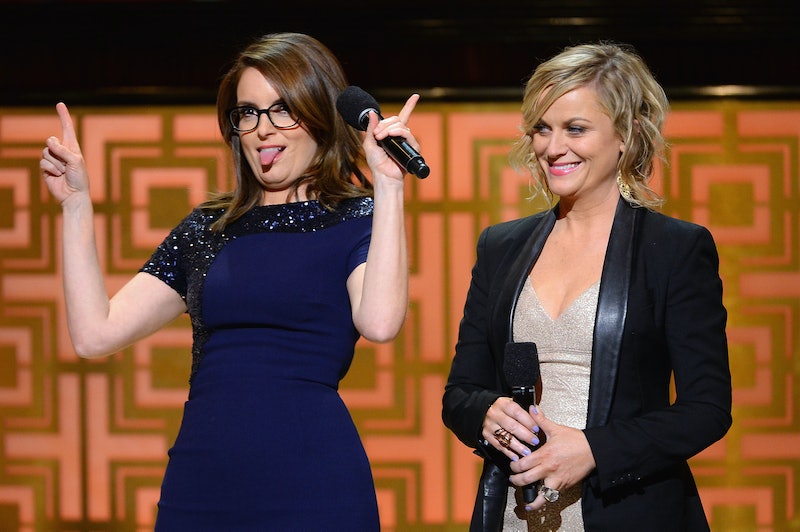 When it comes to famous friendships in history, men tend to get all the airtime. Bromance through the ages has been chronicled exhaustively, from John Adams and Thomas Jefferson to Mark Twain and Nikola Tesla. If you can demonstrate that two famous men happened to like each other, you're pretty much guaranteed a book deal. Famous female friendships, on the other hand, get less attention.

We don't know much about the female circles of famous queens like Eleanor of Aquitaine or Cleopatra, and powerful women have often been discussed in terms of their relationships with men, not what they got up to amongst themselves. Some of the most studied literary friendships — like the 25-year correspondence of Emily Dickinson and Thomas Higginson, for instance — are between men and women.

Why don't we know very much about historically important woman-woman friendships? According to Albrecht Classen and Marilyn Sandidge in Friendship In The Middle Ages And Early Modern Age, it's a sexism thing. They say that "in the history of patriarchal Western literature, friendship among women was mostly excised, ignored, or cast into a shadow of doubt ... only men were regarded as strong enough to maintain the serene, mostly rational, idealistic friendship with another person."

Complete nonsense, obviously. But the narrative of famous women in history tends to follow the do-it-alone pioneers, like Marie Curie or Florence Nightingale, who are seen as having 'no time' for other women. Urgh, ladies and their feelings, am I right?

However, there are some female friendships that we know have changed the course of history. This International Women's Friendship Month, take the time to learn about these famous lady friends.

When the great American singer Ella Fitzgerald was asked about her big break, she would always attribute it to an unlikely source: Marilyn Monroe. Apparently, Fitzgerald tried to book a gig at the Mocambo in Hollywood in 1955, but the manager was unsure about whether she'd draw the crowds because of segregation and racism.

Monroe stepped in, and promised that she'd book a table in the front row every night if they gave Fitzgerald the job. The press turned up in droves to see Monroe, Fitzgerald was a hit, and history was made. "I owe Marilyn Monroe a real debt," Fitzgerald would say later. "After that I never had to play a small jazz club again. She was an unusual woman — and ahead of her time, and she didn't know it."

Elizabeth I and Mary Dudley

How much do you love your friends? Enough to nurse them through a disease that might leave you disfigured for life? Mary Dudley was the sister of Robert Dudley, the handsome favorite of Queen Elizabeth I, and the two served in the Queen's court as her most trusted confidantes. But it was Mary who nursed Elizabeth through a deadly battle with smallpox in 1562. Elizabeth recovered fully and went on to rule for decades, but Mary's face was left scarred forever by the disease, apparently horrifying her husband.

Mary and Elizabeth had a sometimes tempestuous relationship — Mary was a go-between for a potential suitor for Elizabeth's hand in 1559, but the Queen got cold feet, and Mary was left embarrassed and furious. But when Mary finally left court in 1579, Elizabeth was apparently still her closest friend. Save a queen's life once and she (hopefully) never forgets.

These two giants of the sports world were the biggest rivals in tennis — and best of friends off the court. From 1973 to 1988, they competed against one another in a whopping 80 matches, including 61 finals. But they were such good mates that, after many finals, they'd travel to their next tournament together — no matter who'd won. (Try to imagine Federer and Nadal doing that.)

The two legends of tennis admitted in a 2010 documentary that they often call each other in the middle of the night to talk. They've gone on double dates — Martina even introduced Evert to her second husband. And Navritalova now says that Evert's own mother was one of her biggest supporters: “From the first time I appeared on the tour, I got the feeling she honestly felt bad when I lost and happy when I won.”

Oprah and Gayle are one of those name pairings that everybody immediately knows — the most powerful woman in media, and her closest confidante. Gayle King has been by Oprah's side for decades since they first met in 1976, and has been an integral part of her empire, from editing O Magazine to being a special correspondent for the Oprah Winfrey Show.

The twosome is so close that they've been dogged by rumours of lesbianism for years, but, as Oprah told Barbara Walters in a tearful interview in 2010, if she were in a same-sex relationship, she wouldn't hide it. Rosie O'Donnell backed her up, telling the Huffington Post: "People don't really understand or don't have the privilege of seeing a friendship between two women that is that deep." Amen to that.

These two were the founders of women's rights in America, and by all accounts were a formidable twosome. Introduced in 1851 by Amelia Bloomer (who gave us women's trousers), Anthony and Stanton were a feminist team made in heaven, campaigning for women's suffrage by playing to each other's strengths. Anthony, who wasn't married, could travel around the country rallying for their cause, while Stanton, an excellent writer, wrote her speeches for her.

"No power in heaven, hell or earth can separate us, for our hearts are eternally wedded together," Stanton once wrote to Anthony. They were firm friends until Stanton died, some 50 years after they'd first met.

It's not an ordinary friendship when the two people involved meet only once, shortly before one of them dies — but Anna Akhmatova and Marina Tsvetaeva weren't ordinary people. They were Russian poets who formed a bond before the 1917 Revolution, and witnessed the horrors of Stalinism afterwards. Their poems were banned, but are now considered some of the greatest in Russian literature.

They admired and read each others' work for many years. Marina often dedicated poems to Akhmatova, which the poet carried in her handbag until they fell apart. But the pen pals never met until 1940, shortly before Tsvetaeva committed suicide. After her death, Akhmatova was distraught, and wrote a poem for her:

Look, by the eastern wallWhere raspberry canes are tangling with each otherThere is a fresh, dark elderberry branch,And that is like a letter from Marina.

Justine Larbalestier once said, "If you are causing trouble, look for allies, always." Gloria Steinem and Marlo Thomas are some of the most famous troublemakers in the history of American women, and they became friends because of one sentence: "Boy, I don't know which one of you I'd like to f*ck first!"

That immortal line was uttered by a male television agent in his office in 1967. He'd brought the two women together to discuss the possibility of Thomas, an actress, starring in a show about Steinem's famous time as a Playboy Bunny.

"Boy, did he pick the wrong two women to say that to," said Thomas later. From that ignominious beginning came a friendship that defined the feminist movement of the 60s and 70s: Steinem and Thomas helped found the Ms Foundation for Women, and both continue to be outspoken activists for women's rights and freedoms worldwide.

Mary Todd Lincoln, wife of Abraham, had what was, for the time, a very unusual best friend: her dressmaker, ex-slave Elizabeth Keckley. Keckley had bought her own freedom after 38 years as a slave in 1852, and a decade later, was the dressmaker to the female political 'stars' of the era. A meeting with Lincoln's wife was inevitable.

But Keckley wasn't just a dressmaker and confidante. She founded the Contraband Relief Association in 1862, providing help, food, housing and clothing to newly freed slaves, and together, she and Lincoln mourned their sons, who died within a year of one another.

"I consider you my best living friend," Mary Todd Lincoln wrote to Keckley in 1867 — but Keckley's decision to publish a memoir about her time with the Lincolns, Behind The Scenes, in 1868, severed their bond forever. Sadly, Lincoln never forgave her.

Oh, Tina and Amy, how we love you. The best comic gal pal team in the world (in our humble opinion, anyway), Fey and Poehler have been friends for decades. They met in 1993 in an improv class, and since then, their careers have overlapped and boosted one another, from the legendary improv league The Upright Citizens Brigade, right through to SNL, and hosting the Golden Globes together. Twice.

When Poehler finally joined Saturday Night Live, Fey recorded in her memoir Bossypants, "I was so happy. Weirdly, I remember thinking, 'My friend is here! My friend is here!' Even though things had been going great for me at the show, with Amy there, I felt less alone."

Currently, they're filming a new flick together, The Nest, about sisters trashing their childhood home after discovering that it's up for sale. Can we buy our tickets now?