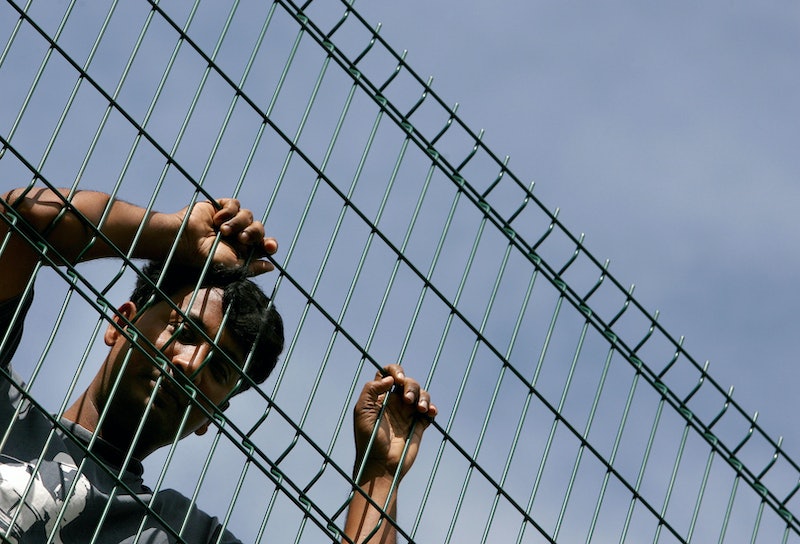 In a chilling illustration of the desperate world of modern migration, a small child was smuggled into Spain in a suitcase from Morocco, Spanish police said Friday. BBC reports that Abou, an eight-year-old boy from Ivory Coast, was discovered inside the luggage of a 19-year-old woman, who had entered Ceuta — a tiny Spanish enclave tacked onto the edge of Morocco — on Thursday. Police discovered the boy after an X-ray scan revealed a human form inside the case, AFP reports.

“When they put the suitcase through the scanner, the operator noticed something strange, which seemed to be a person inside the case,” a civil guard officer told the agency. “When it was opened they found a minor, in a terrible state.” Abou was immediately taken into the care of authorities on Ceuta, while the 19-year-old woman was arrested. The woman, who was due to go before a judge, is not related to the boy, according to El Pais, but was allegedly paid by his father to smuggle the boy across the border.

AFP notes that Abou’s story is merely a particular remarkable case plucked out of a massive wave of migrants who risk their lives in attempting to reach Ceuta. Methods vary, with some smuggling themselves in vehicles or cargoes, while others attempt to simply scale the 23-foot border fences that separate Spanish territory from Morocco. Earlier this week, according to AFP, a Moroccan individual, 23, was discovered in a shipping container in the port of Melilla — a town that experienced a dramatic storming of the border fence by at least 1,000 migrants in May 2014.

Human Rights Watch reports that at least 4,300 people entered the Spanish bastions of Ceuta and Melilla in 2013, a massive increase from 2012’s count of 2,804. And of course, the Spanish-Moroccan border is not the only high-traffic immigration route — the international flow of migrants is “increasing drastically and globally,” according to the International Organization for Migration. The UN High Commission for Refugees puts this down to “globalization and growing disparities in living conditions, both within and between countries.”

Among the massive waves of people who undertake potentially lethal journeys to reach countries where, they hope, they will have better opportunities, Abou’s story stands out because of the ingenuity and audacity of the smuggler’s approach. And for the chilling way it twists the old joke to friends setting off on vacation, “Won’t you take me with you in your suitcase?” But other migrants — driven to desperate means — have come up with similarly risky and scarcely credible solutions.

In 2005, The Napa Valley Register reported that Marisela Chavez-Ramirez, a Mexican woman from Guanajuato state, and her three-year-old daughter were allegedly smuggled into the U.S. in the gas tank of a Dodge Caravan. The pair were discovered when an inspection showed that a second tank had been added to the vehicle to hold fuel. “To see a child, with a baby bottle in its mouth, that was shocking,” customs officer Adele Fasano told the Register.

Smugglers have also used fake FedEx trucks to move people and drugs across the U.S.-Mexican border, co-opting other trusted names such as Walmart and DirecTV to evade suspicion. In one case, ABC News reports, a fake U.S. Border Patrol van in Casa Grande, Arizona, was raided, and discovered to contain 31 migrants. Other smuggling methods, seen in California, involve sewing clients into car seats, or hiding them in vehicle compartments. Mexican immigrants might pay up to $4,000 to be transported in vehicles adapted to obscure them, sometimes right next to the car engine, The Daily Mail reported in 2012.

Desperate people are very ingenious and very clever, and I am quite often surprised at the complexity and the thought behind devising these things. Sometimes my heart is broken because they resort to things that lead them to be injured, stranded or dead by the smugglers. You have to feel compassion for people who are driven to these measures.

Such journeys often end in tragedy. In 2000, two Cuban schoolboys snuck into the wheelbay of a British Airways airliner, but died minutes after takeoff as the jet rose to 37,000 feet. Maikel Almira, 16, had left a note for his mother, explaining that he was headed to America to find work. His body was discovered in a field near Gatwick Airport. Almira’s companion, 15-year-old Alberto Rodriguez, also died. His body was seen falling from the aircraft as it took off from Gatwick the next day.

Abou, at least, is alive — if shaken — after his uncomfortable journey. But he's not the first, and he certainly won't be the last, to risk his life to gain a better one.

More like this
The Most Powerful Photos From The Weekend’s Abortion Rights Protests
By Melanie Mignucci
For These Abortion Clinic Volunteers, Going TikTok Viral Is A Risk Worth Taking
By Audra Heinrichs
Boris Johnson’s Leadership Is In Question – Again
By Bustle UK
Supreme Court Overturns Roe v. Wade
By Melanie Mignucci
Get Even More From Bustle — Sign Up For The Newsletter