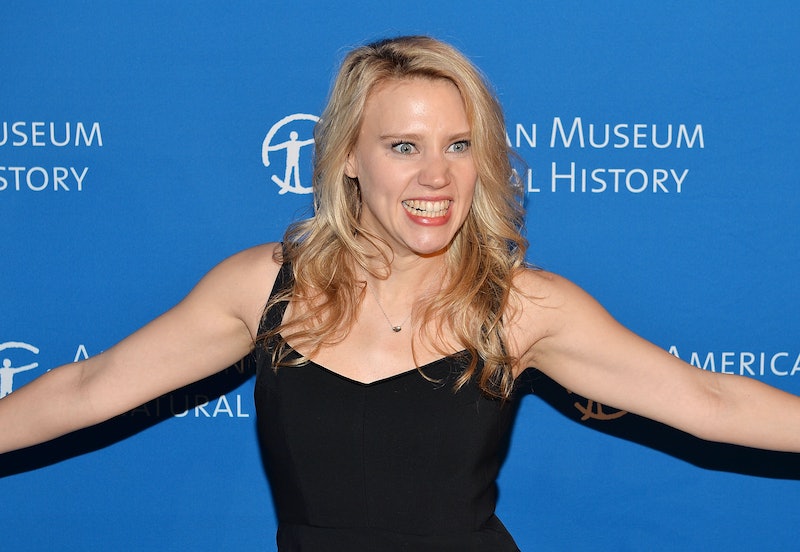 Saturday Night Live MVP Kate McKinnon lives and breathes comedy. While you might be interested in McKinnon's personal life considering her rise to celebrity after becoming an SNL regular, her interviews reveal she lives her life just like everyone else, only a whole lot funnier. When it comes to being candid, the one thing McKinnon cannot stop talking about is her comedy, and her fans would not have it any other way. Best known for her amazingly spot on impersonations of celebrities like Justin Bieber, Hillary Clinton, and Ellen DeGeneres, McKinnon, who joined the SNL cast in 2012, is quickly becoming the long-running sketch show's next breakout star.

If you are looking for more insight into who McKinnon is when she isn't on stage, her past interviews offer up a picture of a woman devoted to her work. For her, humor can be found anytime, anywhere. She makes it a point to surround herself with people who inspire her. McKinnon appears to have her life together, while also totally embracing her inner weirdness. She never shies away from a comedic challenge, and it is this go for broke attitude that has earned her a legion of fans. Do you want proof of how cool McKinnon is off stage? Just check out these nine quotes.

"As minorities, we’re on the fringe, and there’s just something so wonderful about that perspective, something so inspiring. If you’re part of that minority, you can make fun of those people while respecting them and lifting them up." — AfterEllen

McKinnon is out and proud and using her perspective on life to add her own brand of funny to every project she takes on.

"One of my favorite things is to try and make an unlikable person endearing." — Entertainment Weekly

Counting up all of the different characters McKinnon has played would be a major task, but one thing is clear: no persona is off limits. She is not afraid to be unlikable, but she also loves to find something relatable in even the most challenging of characters.

"In high school there was a teacher who had a distinctive voice with a lateral lisp. It was very high and very strange. I did the homeroom announcements every morning, and one day I did them as her. It caused a real ruckus." — Details

In a Details interview, McKinnon revealed the first impression she ever mastered was of Barbara Walters, but the first one that got her in trouble was of her teacher with a lisp. The "ruckus" she caused certainly did not deter her.

"I always gravitate towards things that are not beautiful, but broken and weird and fascinating." — The Daily Beast

If this quote does not make you want to profess your undying love to McKinnon, then nothing will.

"I’m a very low-key person but for some reason, I like to act out. Maybe that’s where I get [the release], I act out…I just love weirdos." — Entertainment Weekly

One thing that shines through every McKinnon quote is how calm she seems as opposed to the wonderfully wacky characters she brings to life. The idea that channeling her inner weirdness into her performances is a form of release for her makes so much sense.

"Sometimes I see someone who is so mystical and strange, and I say thank you." — Late Night with Seth Myers

Do you want to know where the comedian draws her inspiration for her characters from? From all the unusual real life characters she meets.

"If you asked me to seriously kiss someone on a screen, I would be very uncomfortable. But I will lick any part of your face." — Details

Oh, McKinnon, you are super perfect. If you are wondering what this quote is in reference to, it is her now infamous sketch with Louis C.K.

"I mean everyone does an impression differently, because what you love about the person you're doing and what you feel — what you have in common with that person. You're channeling a version of them blended with yourself." — GQ

For non-comedians, the art of doing impressions seems mysterious, but McKinnon sums up her technique perfectly.

"The after-party is always at a restaurant, and for me, the fun starts when I get a cheese platter. That's as f--ked-up as I get." — Details

Raise your hand if you want to be McKinnon's best friend now.

More like this
Dakota Johnson Reveals Why Filming Fifty Shades Was “A Battle”
By Rachel Mantock
Anne Hathaway’s ‘The Devil Wears Prada’ Anniversary Post Turned Political
By Brad Witter
All The Sneaky Lindsay Lohan Movie Easter Eggs In Her New Ad, Explained
By Stephanie Topacio Long
You Might Want To Rewatch 'Elvis' For This Britney Spears Easter Egg
By Grace Wehniainen
Get Even More From Bustle — Sign Up For The Newsletter