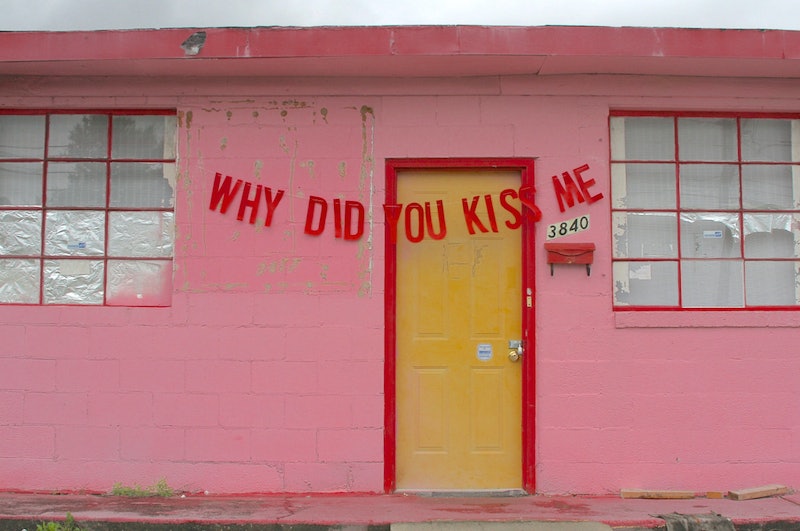 What does Peyton Fulford's Abandoned Love photography project have in common with Gretchen Wieners' hair? It's full of secrets. But the comparison stops there — because instead of using secrets as weapons, Fulford made art out of the confessions people sent her on Tumblr.

As she collected messages from her Tumblr followers for the participatory art project, Fulford noticed themes of "love and melancholy" and decided to use phrases with these themes to shake up our typical, celebratory image of a banner. The project is reminiscent of PostSecret, except instead of postcards, the secrets are made of cut-out words draped on abandoned buildings in Columbus, Georgia. The theme of abandoned love, she writes on her blog, is present both "in words and in the abandonment of the building itself."

Fulford, a Studio Art major at Columbus State University, took inspiration from Klaudija Visockyte's "Please Don't Leave Me" photography series, which placed the eponymous words on different household items, and Miranda July and Harrell Fletcher's Learning to Love You More project, which gave readers a creative assignment each day, one of which was "make an encouraging banner."

By collecting her material from Tumblr, making it into physical objects, photographing them, and sharing the photographs back on Tumblr, Fulford crosses the boundary between the "real" and digital worlds multiple times. And by doing so, she publicizes the emotions many reserve for the anonymity of the Internet.

Here are some of the finished products:

The past tense of this sentence along with the cracked walls in the background leave an eerie impression of broken trust.

Whether or not Fulford intended it, these words in front of what looks like a former fast food restaurant conjure a haunting rendition of the old Burger King slogan, "Have it your way."

Since Fulford corrected "alot" to "a lot" in the photo's caption, it looks like she kept the grammatical error in the banner to make it true to the original user's message. My grammar radar is twitching, but the message does come off as rawer this way.

The wall itself looks worn out from relationship drama.

This simple but surprising phrase makes us question what "home" means, and the building epitomizes the abandonment the words describe.

The smallness of these words against the vast expanse of the wall embody the bleak feeling that we're not enough, but the charming simplicity of the image reminds us that a little can be enough.

The sentiments in Fulford's banners are all relatable, yet we rarely admit that we relate to them. She writes on her blog:

We, as human beings in the technological age, constantly lose touch of reality and begin to perceive the people around us as perfect, when in reality we all feel deeply and go through similar emotions. Ultimately, I wanted this project to bring light to the actual feelings that are usually shared privately behind closed doors.

When all our friends are smiling in Facebook photos, social media can make use feel alone in our despair. Yet, on the flip side, forums like Tumblr and PostSecret can make us realize we're not the only ones having a rough time. Abandoned Love recognizes the internet's potential to make us feel less abandoned and brings this comfort out into the real world and back. Images: Courtesy of Peyton Fulford