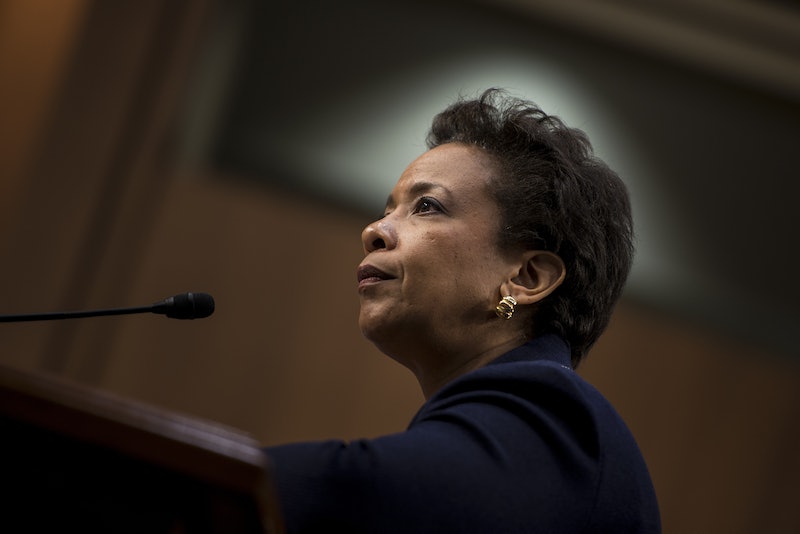 On Friday, following her visit to the troubled city earlier this week, newly-appointed Attorney General Loretta Lynch announced that the Justice Department will conduct an investigation into Baltimore's police. The city in recent weeks has become the center of national attention — and fury — in the wake of the death of 25-year-old Freddie Gray, and Lynch's announcement will no doubt be welcome by many. But what could result from the DOJ's investigation of Baltimore police?

Speaking at a press conference, Lynch signaled her intention to continue to engage the DOJ in the complicated relations between police and community, as her predecessor Eric Holder had done similarly during his last year as Attorney General. Prior to her announcement, the Justice Department had already been investigating the violation of civil rights in Gray's death, and was working with Baltimore police to try to fix some issues. But this federal investigation, said Lynch, will be of a broader scope than the others, encompassing police tactics and practices:

Rather than examining whether the police department violated good policies, we will examine if they violated the constitution and the community civil rights.

Known as a "pattern or practice" review, the investigation will look into Baltimore police's stops, searches, and arrests, its use of force, and whether there has been a practice of discriminatory policing. According to The Washington Post, the investigation will involve the direct gathering of information from the community, police officers, and local officials, including public defenders and prosecutors. DOJ officials will also observe police activities in ride-alongs and review reports and past incidents.

The DOJ will issue a public report after the investigation. If its findings show that Baltimore police displayed a pattern or practice of violating constitutional rights, the Justice Department will seek to reform the force through a court-enforceable agreement, The Washington Post reported.

The Justice Department has been able to investigate local police departments since the passage of the Violent Crime Control and Law Enforcement Act in 1994. Civil rights probes have the potential to push for much-needed change, but they often take a while to produce its findings.

The Baltimore investigation echoes that of Ferguson's police department, conducted after the death of unarmed teenager Michael Brown at the hands of a cop ignited furious nationwide protests. The Justice Department's probe into Ferguson — taking an unusually speedy seven months — ultimately found that Ferguson police routinely violated the Constitution, engaged in racial bias, and prioritized monetary profits over public safety.

Last year, the DOJ's investigation into Cleveland police concluded it had engaged in a pattern of unreasonable, sometimes unnecessary force, including shootings, strikes to the head, and excessive force against the mentally ill. In Cleveland last year, an 11-year-old boy, Tamir Rice, was fatally shot by police while playing with a toy gun, further fanning the flames sparked by allegations of police brutality and racial discrimination.

Lynch visited Baltimore days before to meet with Mayor Stephanie Rawlings-Blake, law enforcement officials, and community and religious leaders. Rawlings-Blake had requested the DOJ investigation into the city's police department, and such a request by the mayor or police chief is rarely turned down, NBC News reported.

The Freddie Gray protests in Baltimore turned violent as Lynch was sworn in as Attorney General, marking a turbulent first few weeks on the job. According to NPR, when asked on Friday how she felt about the riots, Lynch said she felt "profound sadness" as she watched the events unfolding on the news. She added:

None of us have any illusions that reform is easy. The challenges we face, and that Baltimore faces now, did not arise in a day, and change will not come overnight. It will take time and sustained effort. The people I've met in Baltimore, from the protesters to the public officials to the officers, including one injured in the violence, all were saying the same thing: "I love my city and want to make it better." I'm optimistic about the process and am hopeful about the days to come.