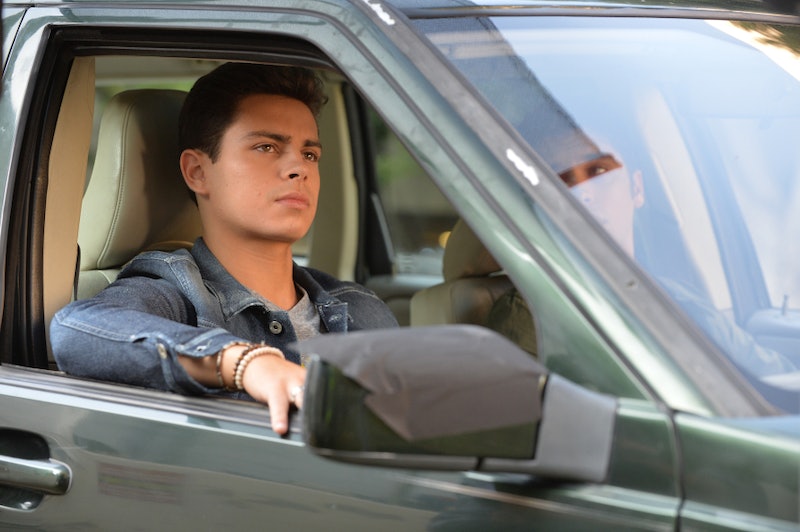 If you're a Fosters fan, you probably haven't been able to stop thinking about the series' Season 2 finale. I mean, how could you? Mariana, Jesus, and Ana's fates were left uncertain after an allegedly fatal (for one of the characters) car crash — which means you've obviously been searching far and wide for The Fosters Season 3 spoilers. Again, how could you not? Earlier this week, the synopsis for "Wreckage," The Fosters Season 3 premiere episode, was released online and, let's just say we're in for MAJOR struggles and changes when the Adams Foster family finally returns.

Luckily for all of us Fostersfans, spoilers for Season 3 have been popping up online since the Season 2 finale. But, unfortunately, none of them seem to be bearing good news for any of our favorite characters or 'ships. In fact, the synopsis for "Wreckage," combined with the knowledge that Jake T. Austin will no longer be a series regular is ominous at best. I mean, we can't really be that optimistic about a premiere that's titled "Wreckage," after all. So, what are the spoilers mapping out for the Adams Foster family in Season 3? Well, for one, Jonnor fans will be extremely surprised to find out who's standing in the way of this 'ship feeling comfortable and safe in the world they live in.

What does that mean? Well, obviously that the Season 3 premiere will address all of the questions left in the wake of the Season 2 finale. Are Jesus and Mariana alive? Is Ana alive? Would The Fosters really kill off Jesus? Aside from that, however, the title could be referencing the state of the family after the crash — I can't imagine that everyone is OK, especially after how rough Season 2 was on every single member of the Adams Foster clan. The synopsis for the premiere states that the family will deal with the aftermath of the crash — so, basically, they're navigating the wreckage caused by the literal wreckage. I'm already tearing up just thinking about it.

Whether or not Jesus died in the Season 2 finale car accident is uncertain, but it's clear from Austin's tweets that his time on the series is over. In the premiere synopsis, it's revealed that Stef will be trying to find the driver of the other car at the beginning of Season 3. So the crash definitely won't be long forgotten by the time the series picks back up in June — Jake T. Austin, however, may be a thing of the past.

Lena's Father Is Coming Back

It's already been confirmed that Bruce Davison has been cast on The Fosters Season 3 as Lena's father, replacing Stephen Collins who only appeared as Lena's father in the Season 1 finale. Recasting a minor character like Mr. Adams absolutely means that he'll be returning this season which, as the casting announcement reveals, will be during the third season's fourth episode.

The premiere synopsis reveals that Callie's probably getting a new love interest. His name is AJ and Callie meets him while volunteering at the drop-in center — yep, you guessed it, AJ is a "foster teen runaway," just like Callie once was. And, based on the fact that the synopsis reveals that AJ is searching for his older brother, it's clear that he's not going to just pass in and out of Callie's life. This could be her new love interest — replacing Brandon and the ever-wonderful Wyatt — in Season 3. Is Callie really in the right place, emotionally, to help someone that's in the same shoes she was in back in Season 1? I'm not so sure this guy will be a good match for Callie either.

Jonnor's Still Getting Brushed Under The Rug

Well, there go all of my hopes and dreams that this couple will finally take center stage in Season 3. The premiere synopsis reveals that, this time, it won't be Connor who pushes this 'ship away — it's Jude. According to the episode breakdown, Jude will tell Connor that he wants to keep their relationship "private." Which, I can understand, considering how poorly Jude and Connor's friends have treated Jude in the past (remember the nail polish incident?), but it's a big change for Jude to be the one pushing Connor away for fear of what people think. Connor's accident was really hard for Jude in Season 2, it almost seems like he should've learned the danger of keeping secrets and not being true to yourself by now.