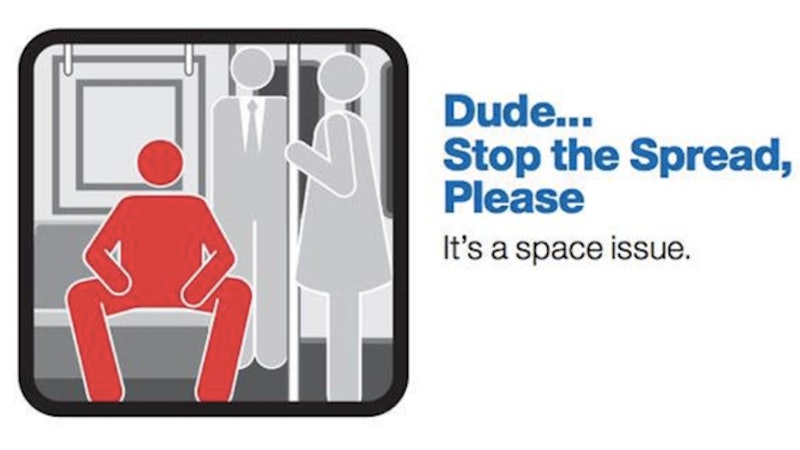 Manspreading. The growing epidemic of public transportation that the MTA, and other sane individuals, decided needed to be stopped. In December the MTA released PSAs aiming to stop "the spread". Well, a whole lot of manspreaders aren't too happy they're being called out and Emily Hopkins at Bitch Magazine has a collection of emails to prove it.

Unfamiliar with the scourge that is manspreading? Let me enlighten you.

You just had a long day at work and just want to go home, drink some wine, and continue your latest Netflix binge. Then it hits you: You're out of wine. So, clearly, you make your way to the liquor store and pick up the biggest box of Franzia you can find. And, wait, Whole Foods is right across the street and you might as well stop in and pick up a pre-made dinner because the way you're feeling right now, cooking something from scratch is not an option. Per usual, you end up leaving with three more bags of groceries than you went in for, but, hey, now you're even more excited to get home. You might even treat yourself to that bubble bath you've been dreaming about.

So you, your briefcase, and your bags of groceries make your way to the train... but then disaster strikes again. No seats. But wait, there really don't seem to be that many people on the train. What gives?

Then you see them. The openly spread inner thighs of man jeans and dude khakis stretched to their limits in successful attempts to take up as many seats as groin flexibility will allow.

As expected, manspreaders are up-in-arms (or maybe out-in-legs?) about the MTA's attempts to take away their freedom of the spread. Accordingly, I've put together a helpful guide to the sorts of reactions for which we should all prepare ourselves. Here are a few highlights from Hopkins' emails telling us exactly what the manspreaders of New York think about the campaign:

1. The Guy Who Missed The Big Picture

"I am highly disgusted at your blatant sexism regarding taking up too much room in one’s seat on trains. I have witnessed more women taking up tons of space with their large handbags and packages than I have see men spreading their legs taking up space. Yet I would never expect the MTA to choose a bigoted gender-targeted campaign to denigrate just women who do such things.”

2. The Guy Who Doesn't Understand Arms

"What about fat people who spill over into adjoining seats? People with BO? Women who drench themselves in cheap perfume? Women who poke you with their elbows because their breasts won’t allow them to keep their arms in front of them?"

Sir, arms are located on the sides of your body, not in the front. But if your point was that boobs take up more room than your balls, well done.

3. The Guy Who Only Had One Thing Left In This World

Maybe he's divorced, in-between jobs, and still upset about the ending of How I Met Your Mother, with manspreading being all he had left to make him feel free.

4. The Guy Who's Just Been Pushed A Little Too Far This Time

"Due to your blatant sexism, I may now to decide to take photos of all the women who take up more room than they should be and send them to you and post them on social media to contradict your sexist anti-male campaign and prove that this is not a gender issue."

That's it! He's had it! He's ready to fight fire with fire! Or anti-manspreading with hypocrisy...

5. The Guy Who Just Really Wanted To Use His Thesaurus

"Frankly, this new advertisement is ridiculous. 'Manspreading' is hardly a legitimate problem. Nor is it limiting all that much space on the subway. This new ad campaign is morbidly sexist, and seeks to shame men for something so extremely innocuous. If 'manspreading' is such a ludicrous epidemic, I should reasonably ask why 'Purse-Seating' wasn’t an equivalent problem?"

Either this guy just really wanted to use that personal thesaurus he got in his end-of-the-year office gift bag, or maybe manspreading has finally given him the excuse he's been looking for to fulfill his childhood dream of coming up with his own PSA. #purseseating

6. The Only Guy With The Legitimate Response

“With the recent 'manspreading' campaign by the MTA, did you ever consider that there are some men that have medical catheters that are inserted into their 'man parts.' What am I supposed to say to a women who complains that I’m manspreading, takes a photo of me, posts it on the Internet, and doesn’t know how painful it is to cross your legs if you have a catheter or other biomedical device in that area? Am I supposed to shout to the world that I have a medical device? Am I supposed to wear a handicapped sticker, or an MTA sticker giving me permission to manspread, wherever I go on the subway to that women don’t take photos of me and then send them to news organizations?"

Yes. This is a valid concern that needs to be taken into account. But what about the people who have unseen medical conditions who could really use a seat and instead are met with outstretched man thighs. They could ask manspreaders the same questions, sir.

More like this
Your Daily Horoscope For August 15, 2022
By Mecca Woods
Dunkin’s Pumpkin Spice Latte Is Officially Back This Week
By Mia Mercado
25 Things I've Reduced My Life To, In Addition To WFH In My PJs
By Ginny Hogan
The Spiritual Meaning Of The August 2022 New Moon
By Nina Kahn
Get Even More From Bustle — Sign Up For The Newsletter