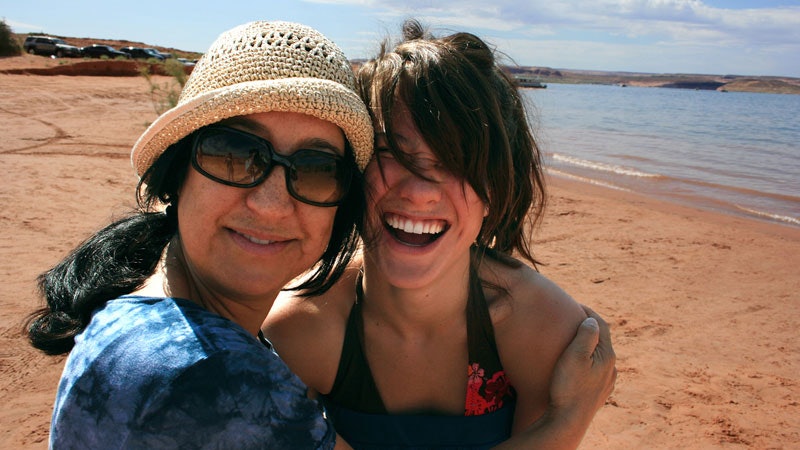 Did you ever stop and think, "I'm really awesome, and so is my mom. I wish someone would write a book about our lives so everyone else could experience the general awesomeness that is us." You know what? I don't blame you.

Admittedly, no matter how cool I think my mom and I are, we probably aren't noteworthy enough to get a whole book to ourselves (yet, anyway). But you know what mother-daughter team is really freakin' cool and now has a book dedicated to their combined greatness? Writers Mary Wollstonecraft and Mary Shelley (she wrote Frankenstein, maybe you've heard of it?). Charlotte Gordon's new book Romantic Outlaws: The Extraordinary Lives of Mary Wollstonecraft and Her Daughter Mary Shelley looks at the lives of both women, alternating chapters to place their lives side by side.

As Gordon points out, there's already a ton written about Wollstonecraft and Shelley individually. Both ladies are famous and important in their own right, and there's a lot of interest surrounding them. But, due to Wollstonecraft's untimely death, we don't typically associate them with each other. I'll be the first to admit that I felt like a rotten former English major when I read this, since I didn't even know they were related (brb, off to feel silly). But the two actually had a huge impact on each other's life and writing, even though they only existed on the planet together for 10 days.

Wollstonecraft may not specifically have had her future daughter in mind while writing, but she was fighting not only for herself but for future generations of women. So, in a way, her books were setting up her daughter for a world that would (hopefully) be kinder to her than it was to her mother. Shelley, in turn, never got over the sting of losing her mother, especially since she grew up with a loving but cold and demanding father and a stepmother who she often butted heads with. She believed that life would have been different had her mother survived and blamed herself for her death. This sense of guilt and loss plagued her all her life and found its way into her writing, giving Frankenstein its depth and despair.

But is it really such a surprise that these two women were such an important part of each other's lives? Regardless of the type of relationship you share with your mother (maybe you're Rory-Lorelai Gilmore, maybe you're more Lorelai-Emily Gilmore), it's hard to argue that the mother-daughter relationship in any form plays a pretty big role in our lives. Even the absence of a relationship, like the one Shelley had, can shape the way a woman turns out.

Of course, Wollstonecraft and Shelley aren't necessarily the coolest women on the block (that would be me and my mom, natch). History has turned out some pretty badass mother-daughter pairings. The women below are so cool that it's no wonder their daughters did equally great, if not better, things. They might not always have gotten along (looking at you, Maria Theresa and Marie Antoinette), but hey, don't you fight with your mom every once in a while?

Mary Wollstonecraft was a writer, philosopher, and all around badass feminist. She's best known for her book A Vindication of the Rights of Women, in which she argued that women should be educated and should never be considered the property of their husbands. Pretty radical for the late 1700s.

Mary Shelley obviously inherited her mother's gift for writing and penchant for rebellion. While on holiday, she was asked to prepare a ghost story to share with her friends. What started out as a short story for the amusement of her fellow travelers eventually became Frankenstein, one of our best-loved horror stories.

It's really, really hard to win a Nobel Prize, but apparently no one told that to the Curies, who basically collected them. Marie Curie was a physicist and chemist who won the Nobel Prize twice, once for Physics with her husband and once for Chemistry. She was the first woman ever to win a Nobel Prize.

Her daughter must have lived completely in her shadow, right? Wrong! Irene Joliot-Curie decided that she was also going to win a Nobel Prize for Chemistry with her husband. The Curie women really make it look easy.

Anne Boleyn and Elizabeth I of England

Anne Boleyn was a member of the British court who convinced King VIII to marry her by refusing to become his mistress and sleep with him unless he made her queen (basically, she bargained that he'd buy the cow if he couldn't get the milk for free, to quote your grandmother). She was unable to produce a male heir, however, and Henry had her killed on charges including witchcraft and incest.

Her daughter, Elizabeth, would go on to become one of the most famous queens in history as "the Virgin Queen." She refused to marry (though whether she was actually a virgin is up for debate) and her reign was known as the Elizabethan era. Plus, she knew Shakespeare and Marlow, which is rad.

Proof that badassery runs in the family, Lucy and her daughter Alice were all about sticking it to the man. Lucy successfully striked for equal pay while teaching, was the first female college graduate in Massachusetts, was an abolitionist, and petitioned for women's rights.

Her daughter, Alice, would also take up the mantle and fought for equality. She was the editor of a major women's rights publication and acted as recording secretary for the National American Woman Suffrage Association. Like mother, like daughter.

You've probably heard of Marie Antoinette (Giant hair, guillotine victim, "Let them eat cake" lady? Ring any bells?). But maybe you haven't heard of her mother, the critical and overly controlling but objectively badass Queen Maria Theresa. After the death of her father, Emperor Charles VI, Maria Theresa took over the ruling of Austria, Hungary, Bohemia, and multiple other countries. She fought to make her husband Holy Roman Emperor (only because, as a woman, she couldn't hold the title herself) but didn't allow him to rule over her. AND she fought a bunch of wars, including the Seven Years' War, while having 16 children. Damn, girl. Apparently she wasn't the easiest woman to get along with, though, and often criticized Marie Antoinette for being lazy, frivolous, and unable to have children. Meh.