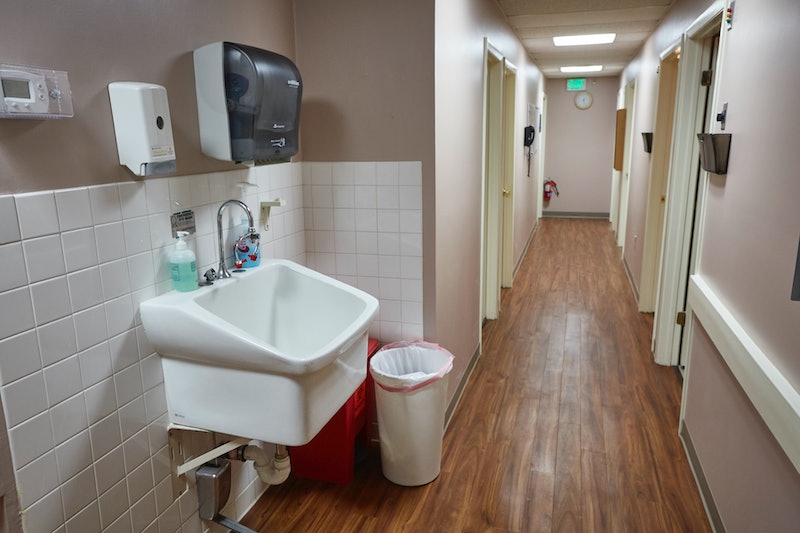 Following the path cleared by abortion foes in Texas, Tennessee Gov. Bill Haslam signed an extreme anti-abortion measure that could close a handful of the state's clinics by July 1. The measure, SB 1280, targets the way abortion clinics in the state are designed and operated, mandating much stricter standards for abortion providers than other outpatient facilities — even those with higher risk of complications than abortion. Tennessee is the the latest state to employ this legislative strategy, which many reproductive health activists and doctors say has an intent other than safeguarding women's health.

By mandating clinics that perform abortions, at any stage during a patient's pregnancy, to be licensed ASCs, abortion clinics will need to meet the same building requirements as hospital-style outpatient surgery centers. Some of these requirements include creating wider hallways and entrances, so that they may fit stretchers, and changing the size of the exam rooms.

According to the Center for Reproductive Rights, these structural upgrades could cost clinics in Tennessee millions of dollars — funds many clinics may not have. A similar provision in Texas shut down a majority of the clinics there — from more than 20 clinics to just eight for the entire state — until the U.S. Supreme Court stepped intervened in October 2014.

"With the stroke of a pen, reproductive health clinics are threatened with closure and Tennessee’s reputation as one of the few states in the South to protect women’s rights and health care will be history," Center for Reproductive Rights President Nancy Northup said Friday in a statement. "Tennessee women are only the latest to see their rights and access to essential health care voted down by lawmakers elected to serve them. They deserve better."

Currently, about half of Tennessee's clinics — just four in all — meet the requirements of an ambulatory surgical center. However, abortion clinics in some of the state's more-populated areas, such as Nashville, would be forced to close unless they can upgrade their facilities by July 1. A clinic in Bristol, located in northern Tennessee on the Virginia border, will also be impacted by this new provision. Memphis and Knoxville currently have clinics that are licensed ASCs.

Although ASCs are typically used for abortions past the 16th week of pregnancy, there has been a greater push in state legislatures to require even first-trimester abortions to be performed in a hospital-style outpatient center. The requirement has become a TRAP (targeted regulation of abortion providers) law of choice for many abortion foes, with 23 states now mandating that abortion providers meet the same requirements as ASCs, according to the Guttmacher Institute; about half of these states specify the size of the hallways and exam rooms.

In Texas, the requirement has been successful at not only shutting clinics, but rendering abortion nearly obsolete for women outside metropolitan areas. If the ASC provision is reinstated in Texas, more than 1 million women would be forced to travel at least 150 miles to the nearest abortion clinic, according to federal court documents. That journey is well over 200 miles one-way for women who live in the Rio Grande Valley or West Texas. The American Congress of Obstetricians and Gynecologists has repeatedly come out against these ASC requirements. In a brief filed in support of several Texas-based abortion clinics in 2013, ACOG stated:

The common procedures performed at these [ASC] facilities are not necessarily safer than abortion and, indeed, many pose greater risks. For instance, the mortality rate of a colonoscopy (34.5 per 100,000) is more than 40 times greater than that of abortion (0.67 or less per 100,000) There is absolutely no medical reason to treat facilities that provide abortions differently than facilities at which procedures with similar or greater risks of complications are performed.