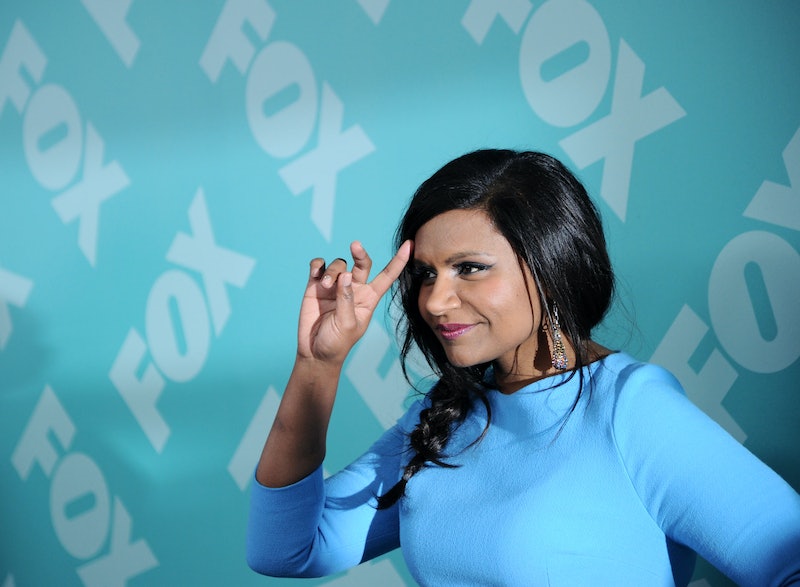 I hate to do it, but I have to say: I think Mindy Kaling has a problem, and she needs help. She has too many celebrity friends that love her, so when she asks them to guest star on her show, obviously they are more than happy to oblige. I guess this isn't the worst problem to have, and while I love seeing Mindy's famous pals like Ellie Kemper and Kris Humphries (the weirdest of the bunch) on The Mindy Project, ultimately, all the focus on the intermittent guest stars is detracting from the very charming, very strong core characters—Dr. Lahiri, Danny Castellano, Handsome (and now Chubby Jeremy), and Magic Morgan.

The newest guest star is be announced is Anna Gunn — none other than Skyler White, Lady Heisenberg. Gunn, who recently won a well-deserved Emmy for her turn as Skyler, will play a an OB/GYN who is Mindy's personal heroine. Dr. Sheila Hamilton is who Mindy proclaims is the "Tory Burch of OB/GYN's." Okay, this sounds amazing, I must admit — especially because Dr. Hamilton tries to lure Mindy away from Shulman and Associates to her own practice.

While I love the idea of Anna Gunn and Mindy Lahiri conspiring together as the most badass lady doctors on TV, I'm wary — is this going to be another two-episode storyline that's promising at first, and then just sort of disappears? This happened all too recently with Ben Feldman's turn on the show. Feldman, who plays most notably Ginsberg on AMC's Mad Men, joined the cast on the episode "Weiner Night" where he played Jason, an incredibly snooty Arts & Culture writer who hated, incidentally, Breaking Bad.

While I appreciate a good in-show wink, I feel like all the guest stars are getting scrambled and not enough adequate screen-time. I would have loved to see more of Feldman, but there just wasn't time, apparently?

And don't forget, Glenn Howerton is still hanging around, too, as the lawyer whose box Mindy tripped over. How much will that story develop? Are there any other guest stars that I am forgetting to mention? It's like a who's who of Mindy Lahiri's Instagram feed. Which is super fun, but also super confusing.

This doesn't bode well for a show that is only in its second season. I wish Mindy would let the plotlines play out more. Use Morgan — he's hilarious! I'm glad that we saw him trying to woo Tanya, and we saw Mindy and douche doctor Adam Pally bond over the community garden/basketball court. But trying to jam so many guest stars in such a short season leaves loose ends — a lot like the ending of Casey and Mindy's relationship, where Casey's character lost his damn mind and wanted to be an event planner.

I still hold out hope for The Mindy Project, because it's still got really strong moments and hilarious writing but if they keep up with this clipped, episodic guest star business, I don't know if even I can keep up.

More like this
6 Mind-Blowing Fan Theories About How Stranger Things Will End
By Kadin Burnett
Why Sadie Sink Is Hopeful Max Will Return In Stranger Things Season 5
By Brad Witter
Hayden Panettiere Admits "Addiction" To Alcohol & Opioids Before Going Sober
By Jake Viswanath
The Star Of 'Ms. Marvel' Has A Legendary Letterboxd
By Gretchen Smail
Get Even More From Bustle — Sign Up For The Newsletter