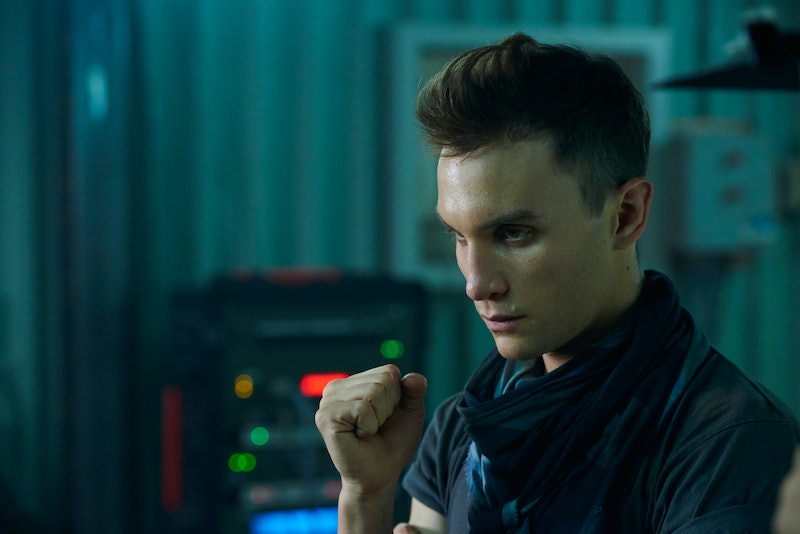 Saturday's Orphan Black has one of those gasp out loud moments. Or, at least that's how I reacted to the most recent they did what?? moment on the show. Orphan Black is known for its twists and insane turns, and they've only getting more intense as Sarah and her sisters uncover each new clone clue. Now, it's time to uncover some male clone clues, too. Remember how in the previous episode, "Formalized, Complex, and Costly," Cosima took the brain out of male clones head, and it was a little bit freaky? Turns out she's not the only one to snag a brain, and the mystery behind what's wrong with the male clones deepens. The only thing about this second brain, thought, is that it's still in the male clone's head. Lately, the male clones have had it worse than the females. For starters, as Mark explains to Sarah, the males were raised aware that they were "brothers," and were trained as soldiers. I'm also willing to bet a ton of the male clones have died over the years, whether through accidents on the military base, or because of their "glitch." It appears as if the males are treated as disposable, and if one fails a mission or task, there are three others to take it's place. If that's not enough, the male clones are also always going through strange stages of testing. The females were just monitored. The males are hooked up to strange machines for diagnostics. This strange testing is what Helena accidentally stumbles upon. She escapes Castor captivity briefly, and finds a male clone in the middle of a crazy, CRAZY procedure. Think, like Clockwork Orange. Think, like what was happening in room 23 on Lost. Think, like what the Hydra agents were doing to kidnapped S.H.I.E.L.D. agents (and those are all the scenarios I can think of that relate to this). Castor is basically doing something like this:

This unnamed male clone is strapped to a chair, forced to keep his head back, and when Helena pulls off his surgical hat she discovers that his head has been completely cut open. Also, his brain is exposed. Also, he's completely awake and alert for this. There are wires plugged into his brain, as if he's hooked up to stereo equipment. If you really want to relive this moment, I'll include a picture of it at the very bottom, but seriously. It's his brain, exposed, with wires, and it's weird. High change I'm going to start having nightmares about someone cutting my head open and sticking auxiliary cables into it. This insane test leads me to believe that Castor is well aware the males and females are brother and sister. Just like Cosima, they're in the process of unlocking the mysteries of the brain, and have probably run a DNA test by now, right? Could they already know what's wrong with the males, and what they're doing now is the plan to fix it? Here's what I'm thinking: just like how Kira was able to give bone marrow to try to save Cosima, with Helena's baby on the way, they're hoping to harvest something from that child, too. That'd make sense, right? There's a cure for the clones out there somewhere, and without the original clone sample, it's going to be impossible to find exactly what's wrong. But with a tiny clone offspring, it might be the key to stopping all this insane glitching, at least for the time being.

So what becomes of this male clone headcase? Well, he begs Helena to kill him. I don't want to know how painful it is to have your head cut open and your brain exposed to fresh air, but I imagine it's like, insanely painful. Death is probably less painful for this clone.

Helena grabs a scalpel and stabs this male clone in the heart, making sure to twist it. It's not as gruesome as you might think, considering this guy had his head cut open. Helena's just trying to make his death as quick and as painless as possible. She succeeds. And there goes another male clone. Hopefully we get some real clone answers before all the male clones end up dead — they are killed off at an alarming rate.

And seriously, this brain.

Fine, you asked for it: