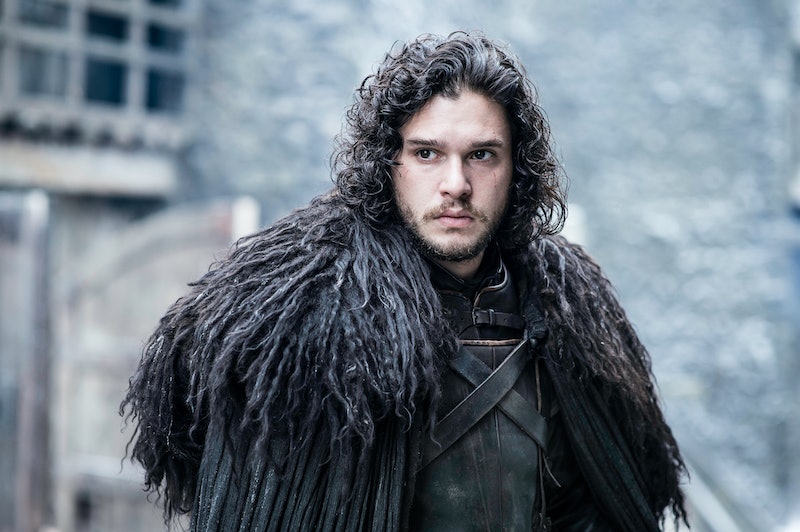 For quite some time now, a fan theory about Jon Snow's parentage on Game of Thrones has spread its way through the internet like a ball of dragon fire. You know the theory I'm referring to, of course. The one regarding L + R = J, which indicates that Jon is not a bastard of Ned Stark's at all, but rather the secret illegitimate son of Lyanna Stark and Rhaegar Targaryen. Last Sunday's episode "Sons of the Harpy" did all but come out and say that the theory is true. Not only was Rhaegar mentioned multiple times, but it was done in a very positive way most of the time. This week, Master Aemon's "Kill the boy" speech hints at Targaryen roots for Jon Snow.

But first, Rhaegar: Before his tragic and surprise death, Ser Barristan made him seem like a downright kind ruler as he recounted to Dany how much her brother used to enjoy singing for the people of King's Landing. That doesn't exactly sound like the cruel man we once thought might have kidnaped and raped Ned's sister. So why take the time to mention it now, especially since we've rarely heard about Rhaegar's backstory before now? Then there was Sansa and Littlefinger's conversation down in the crypts when Littlefinger looked as though he knew more to the story than he was willing to let on. But this series has done even more to add further fuel to this curious fire.

During Sunday night's episode "Kill the Boy," Maester Aemon begins recounting about how "a Targaryen alone in the world is a terrible thing." No sooner does he finish that sentence than does Jon Snow walk into the room. Coincidence? On Game of Thrones, there's no such thing. Not to mention the speech Aemon gave to Jon immediately afterward when he tells him to "kill the boy and let the man be born." Reddit user kidcrumb suggests that this speech is Aemon's way of foreshadowing that Jon will be "reborn" into a new man with a new identity. A Targaryen identity, perhaps?

Separately, these hints might be speculative at best. But when put altogether it looks more and more likely that this theory has some serious backing behind it. Winter may be coming… but so is a big change in Jon Snow's future.

More like this
Emilia Clarke Shares More Details About The New 'Game Of Thrones' Series
By Maxine Harrison
Twitter’s Reaction To HBO’s ‘Game Of Thrones’ Jon Snow Spinoff Idea Is Chaotic
By Stephanie Topacio Long
What Song Does Eddie Play in 'Stranger Things'? Metallica’s “Master Of Puppets” Ignites The Season 4 Finale
By Alyssa Lapid
Did *That* Character Really Die In The 'Stranger Things' Season 4 Finale?
By Grace Wehniainen
Get Even More From Bustle — Sign Up For The Newsletter