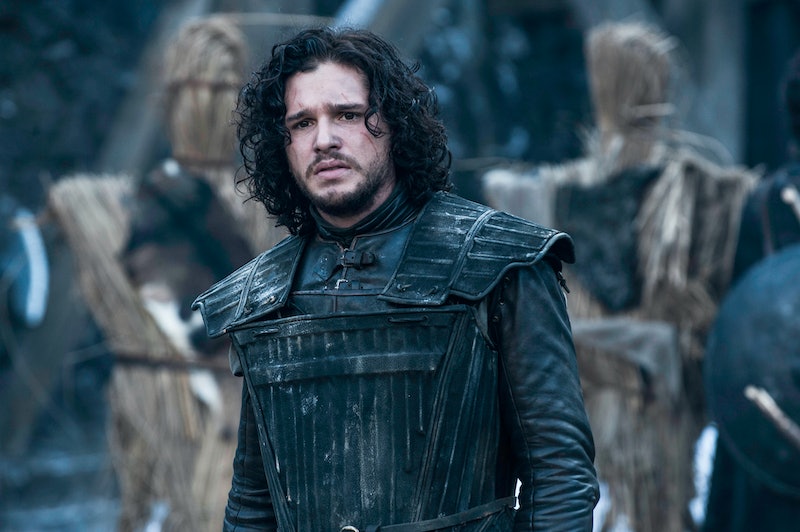 Jon Snow is a bastard — literally. It's a well-known fact to both the citizens of Westeros and the viewers of HBO's Game Of Thrones that Ned Stark sired Jon Snow with an unknown woman while off fighting in Robert's Rebellion. His illegitimate offspring was given the surname all Bastards of the North receive, but was still raised among his trueborn children, much to the chagrin of Ned's wife Catelyn. Being a bastard has literally defined Jon's life: it's why he got the runt of the direwolf litter, it's why he never felt totally at home in Winterfell, it's why he enlisted with the Night's Watch. So what would happen if he were to learn that his entire life was a lie and that Ned wasn't really his father?

A theory postulated by fans of George R.R. Martin's novels claims exactly that. Referred to as "R+L=J," it's one of the most popular theories around, and the one with the most proof in the books themselves. "J" stands for Jon, obviously, but who are "R" and "L"? And why would Ned, a man who was beheaded for being too honorable, lie his whole life about such a shameful act if it weren't true?

Book readers are undoubtedly already familiar with the basics of "R+L=J," although those who just watch the show may not have been exposed to it yet. A brief summary, then: In this theory, "L" stands for Lyanna Stark, Ned's deceased sister. Supposedly Lyanna, who was betrothed to Robert Baratheon, was abducted by Rhaegar Targaryen (the son of Mad King Aerys) and imprisoned in the Tower Of Joy, where she died. According to the theory, though, Lyanna wasn't abducted — she was actually in love with Rhaegar and bore him a son: Jon. On her deathbed, she made Ned promise her something, but we never found out what. It seems likely that he promised her to hide Jon's true heritage, since Robert was hunting down and slaughtering anyone in the Targaryen line. Ever a man of honor, Ned kept that promise his whole life and raised Jon as his own bastard.

If you want further explanation of the details and proofs of "R+L=J," you can watch this six-minute video, which delves deeply into the intricacies of the theory:

George R.R. Martin has never officially confirmed that Jon is Rhaegar and Lyanna's son, although he has admitted that some fans have correctly predicted Thrones' ending. But Thrones actor Sean Bean, who portrayed Ned in Season 1, may have spoiled Martin's surprise by confirming the theory's veracity. During an interview with Vulture's Jennifer Vineyard, in response to whether or not he could reappear on the show in flashbacks, Bean stated in no uncertain terms that, "I've definitely got some unfinished business that needs to be resolved there. I'm obviously not Jon Snow's dad. And you need that to be revealed at some point, don't you?"

So if "R+L=J" is true, then what does that mean for the show? Lots of things, clearly. First of all, it could mean Bean's return to Thrones if flashbacks are needed to flesh out the story of Jon's parentage. Secondly, it could mean the casting of a character often talked about but never seen: Howland Reed. Howland is the father of Jojen and Meera, the greenseer and his sister who joined Bran in his quest to find the three-eyed raven beyond the Wall. During Robert's Rebellion, Howland and Ned were great friends, and the elder Reed was the only other person who was present in the Tower Of Joy when Lyanna died. If Jon were ever to find out who his parents were, it seems like it would have to be from Howland himself.

Thirdly, the revelation that Jon is actually half-Targaryen would foreshadow a collision between him and a character he's never interacted with before: Daenerys Targaryen. For four seasons, the Mother Of Dragons has been off on her own adventures in Essos; she has yet to cross paths with any of the show's other main players. (The only character who has appeared both in her story and the main plot is Barristan Selmy, who was in King's Landing in the first season and joined Dany's entourage in Season 3.) Jon and Dany meeting would be a momentous event for Thrones, and one that would signal a shift into the story's endgame.

Finally, if this theory turns out to be true, then it could very well hint that another fan theory may also be correct. In the books, when Dany visits the House Of The Undying in Qarth, she has a vision of her brother Rhaegar, who tells her, "The dragon has three heads." Obviously, the dragon is the symbol of House Targaryen. If Dany and Jon are two of those heads, then who is the third dragon? Some fans think it might be the show's other nominal protagonist, Tyrion Lannister. In order for Tyrion to be a secret Targaryen, that would mean his mother Joanna was raped by Mad King Aerys. A stretch, but not impossible. After all, Tywin Lannister's last words to Tyrion before he died were, "You are no son of mine."

Will Game Of Thrones end with Jon, Dany, and Tyrion teaming up to save Westeros from the encroaching army of White Walkers? I certainly hope so, if only to see Kit Harington, Emilia Clarke, and Peter Dinklage riding dragons into battle together against a horde of ice zombies. That just might go down in history as the coolest scene on television ever.