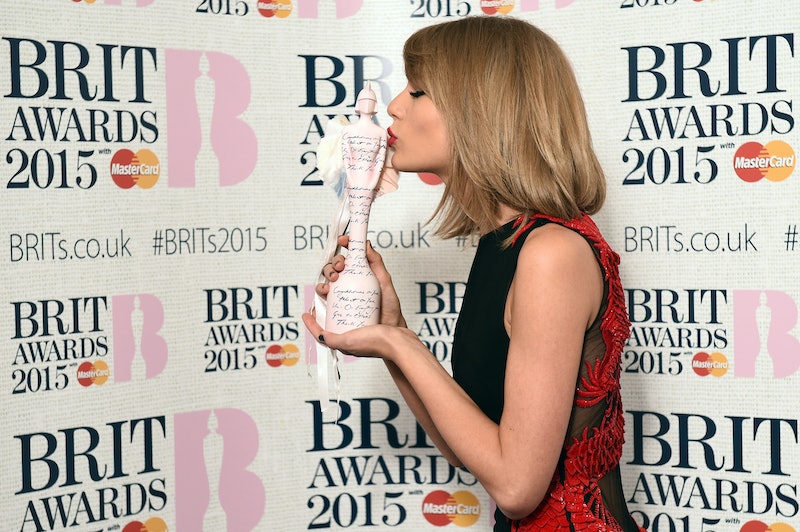 I don't know about the rest of the Swifties out there, but I've been driving myself crazy trying to figure out what will be happening in Taylor Swift's "Bad Blood" music video. The video is slated to premiere on May 17, during or in advance of the Billboard Music Awards, and Swift has released a variety of teaser posters to whet our appetite about what looks to be a Sin City-esque epic. She and numerous other celebrities have adopted alter egos for the plotline of the video, from Swift as Catastrophe to Lena Dunham as Lucky Fiori. What does it all mean? What role do the "Bad Blood" alter egos play in the video? Well, we won't know that until Sunday, but, until then, we can certainly make a guess.

While I anticipate that my guesses will be wrong within the first five minutes of the music video, I am confident enough in my interpretation skills to believe that I will at least get one or two things right. For example, we can reasonably assume that Catastrophe is the (anti-)heroine of the music video, seeing as she's played by the singer of the song — but whether she lives to see the end of that same song is anyone's guess. So, without further ado, here is what role I think each alter ego will be playing in what looks like it is going to be one of the best videos of the year.

Catastrophe is our heroine and the lens through which we are going to view the vicious, bloody world of "Bad Blood." Since this is Taylor Swift, and she has been making a habit of bucking expectations in her music videos so far, I think that Catastrophe won't be a wide-eyed ingenue who gets into a bad situation. I think Catastrophe will find herself in the middle of one, and then be the one who starts gathering a band of evil-doers to settle the score.

Frostbyte looks like a cold one... which means she's a strong candidate to play Swift's number two in the music video. I mean, if you're about to fight what looks like the world's most intense mafia war, would you want to be on the opposite side against someone named Frostbyte? I didn't think so.

Cut-Throat looks like a mercenary or someone who really enjoys what she does (cutting people, duh), so I think that Zendaya's character will be one of Swift's enemies. She's not here to settle a score. She's here because she loves the thrill of the fight, and she doesn't care whose side she's on as long as she gets to have some fun.

The Crimson Curse could go either way. On the one hand, the word Curse makes me think that perhaps she's another one of Swift's enemies but, at the same time, Swift doesn't seem like the type who would discriminate based on curses. Actually, I am going to guess that Hayley Williams will be on Team Catastrophe, because a Catastrophe and a Curse need to be on the same side to assure victory.

Slay-Z was going to pick a side and attend the battle. Really, she was. It's just that she hit the snooze button on her alarm one too many times and, anyway, she doesn't really know these people, and also you know what's better than a stupid knife fight? Taking a nap. Yeah.

Destructa X is totally coming for Swift. Oh, is she coming for her. In fact, I'd even hazard a guess that Destructa is going to be the number two to whomever Swift is fighting in the music video. You don't give a name like Destructa to some random henchman, OK? Especially not to one played by Ellie Goulding.

The Trinity occupies the unique position of being on no one's side and everyone's side. Everyone goes to them for advice or help with turning the tide of the mob war, but the thing is that one of them is on Team Swift, one of them isn't on Team Swift, and the one in the middle doesn't care who wins as long as they get a good story out of it. Either way, I don't see all of them surviving to the end of the video.

Lucky Fiori is a BO$$ — and I think she is the boss that Swift crossed in "Bad Blood," and thus the one that she is fighting throughout. Lucky Fiori knows who everyone is, and she knows how to get to them, so Swift has definitely picked a fight she can't win here. But, hey. Underdog victories are kind of Swift's specialty.