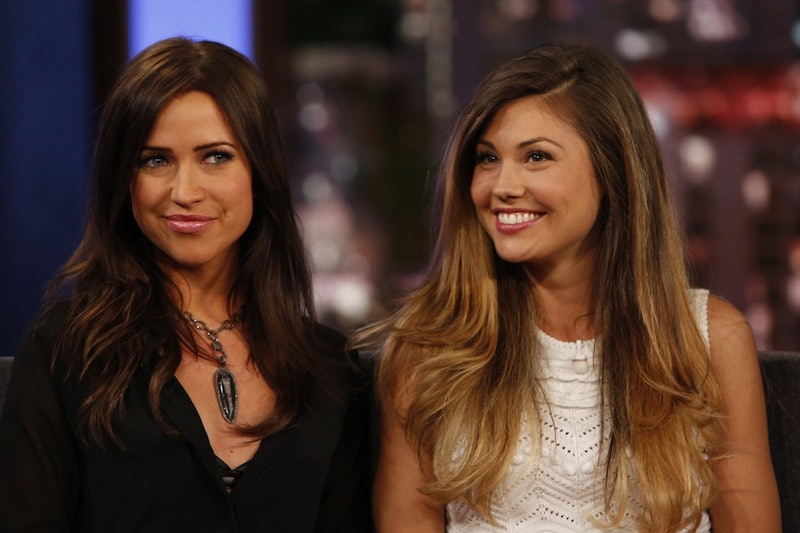 I know it feels like the last season of The Bachelor just ended, but we're already just a week out from the premiere of the new season of The Bachelorette on May 18, so the Bachelorette contestants have just been announced, and now it's time to meet them! This will be the show's eleventh season, which is the most insane thing I've heard all day, and the first episode will feature two women instead of one, with the men choosing whom they'd like to be the Bachelorette by the end of the night. Just kidding, that's the most insane thing I've ever heard.

In this case, the two lucky ladies are Kaitlyn Bristowe and Britt Nilsson, both from the most recent season of The Bachelor, with Chris Soules. Soules eliminated Nilsson in week seven and Bristowe in week nine, decisions that he might be kicking himself for now, as there are rumors that he and his fiancee, Whitney Bischoff, are already having problems.

But anyway! Ours is not to speculate on the fate of previous Bachelor and Bachelorette couples... ours is to meet the new guys competing for Bristowe and Nilsson's hearts! Or heart. Just one heart. Anyway here are the dudes.

Ben's a 26-year old software salesman from Denver, Colorado with a love of the outdoors and a very un-fun-sounding assessment of marriage: "It is a total sacrifice. Marriage is about a commitment to another person and total sacrifice to fulfill that commitment." Hey, don't all volunteer at once.

Our second Ben is also 26, and is a fitness coach hailing from San Jose, California. He's been trying to be more outrageous lately, so I'm predicting he takes off his shirt straight out of the limo and shows us those fitness coach abs. And you can also expect a lot of talk about his mom, because oh boy does he love her a bunch. (She's whom he'd choose if he could have lunch with anyone on the planet. ANYONE.)

Brad (do you mind if I call you Brad?) is a 25-year old from Atlanta, Georgia, with a made-up job called "International Auto Shipper" at which I can tell by his face he makes a lot of money. He also self-identifies as sarcastic and says his fear is people not understanding his sense of humor, so color me nervous! At 6'2", Bradley also helps us continue our streak of only dudes above six feet, as the two Bens are both 6'4".

I knew before I even clicked on Brady that he's in a band, and sure enough, this 33-year old from Nashville, Tennessee labels himself a singer-songwriter and cites Chris Martin of Coldplay as someone he admires, listing him before his own parents. Can't wait to meet you, Brady. And from now on, unless I say so, just know that all these fellas are over six feet. Save us all some time.

GUYS GUESS WHAT CHRIS DOES FOR A LIVING. (Hint: he's telling you with his mouth)... He's a dentist! Because of course he is. He's also 28, lives in Nashville — maybe he's seen Brady's band perform! — and with zero context volunteers that he's been on national television in his underwear. And finally, his biggest date fear is a girl who tries to eat his food, so keep your eyes on your own plates, ladies.

Things were looking good for Clint, who's a 27-year old architectural engineer from Chicago. He talks about his idea of marriage being a partnership between two best friends, lists Good Will Hunting as one of his favorite movies, and is inspired by his dad's work ethic and way with people. It was going so well that for a second there, I thought he and his kind face were gonna be my first front-runner. But then I noticed that Clint is only 5'11" and should be ashamed of himself.

Corey is a 30-year old investment banker from New York City who is presumably related in some way to the Ken doll. Other fun things about Corey are that he has multiple tattoos that he promises are small, can't cite one person whom he specifically admires, and refers to the Dalai Lama as "an enlightened cat." I am worried about you, Corey.

At 35, Cory with NO E is the oldest gent we've come across yet, but don't worry! This residential developer from Pearland, Texas, is still lacking in maturity, as he reveals the very enlightened first date fear of "finding out my date's a dude." Thank you so much for being here with us today.

Only nine guys in, and we're already at our third guy from Nashville. I bet they all can't wait to sit down together and talk about how many of Brady's concerts they've been to. Daniel is 28 and a fashion designer who has ridden his bike cross-country, can use the word "baller" in a sentence, and apparently likes crying at the end of movies, as evidenced by his inclusion of Big Fish as one of his favorites.

A 26-year old real estate agent from Orlando, Florida, David would more than anything to sit down with Brad Pitt and learn how to charm women. And hopefully Pitt is available, because as of right now, David's description of being married sounds a lot like just... being a golden retriever: "It means that you are faithful and loyal and would do anything for that person."

Ian is a 28-year old executive recruiter from Los Angeles, whatever that means, and I like all his answers and his face and would date him myself. Which most likely means he'll go home in the first episode because he didn't do anything to stand out, and Brady brought his guitar and wrote a song for the Bachelorette, whomever she ends up being. (You guys, I really do not like Brady.)

Jared claims to be a 26-year old restaurant manager from Warwick, Rhode Island, but I am almost positive he's Brooks Forester from Desiree's season. He also volunteers with kids with cancer and claims he doesn't have any date fears. Wow, not even going on a date with eight men and one woman? Better not let a Bachelorette producer hear you say that, or they'll put you through the date wringer.

JJ is 32 and a former investment banker from Denver, which I'm assuming means he made so much money that he doesn't have to work anymore. He reassures us several times in his bio that he is rich, and his favorite actor is Robert Downey Jr., who JJ says seems "as cool as the other side of the pillow." Hoo boy.

Our boy Joe here is a 28-year old insurance agent from Columbia, Kentucky. He has no tattoos, a fear of awkward silence, and is kind of mad you asked him about his five year plan, to be honest, because he doesn't think that far ahead. He's a one day at a time type of guy, okay?!? Also is it just me or does Joe look very much like a cartoon dinosaur?

ALERT. Jonathan, a 33-year old automotive spokesman (I dunno, presumably someone who speaks for cars???) does not have a height listed. Hopefully this is just an error, but I must warn you that — *dry heaves* — Jonathan may be under six feet. He also says he'd like to sit down with Warren Buffet to learn his "wealth secrets," and says his biggest fear is a woman having bad breath on a date, so he sounds like a real delight.

Oh my god you guys, guess what Josh does for a living, I just pooped my pants with excitement. He's 27 and from Chicago, and he lists his occupation as Law Student / Exotic Dancer. !!!!!! LAW STUDENT SLASH EXOTIC DANCER. Everybody get in here, this is too exciting.

Joshua is a 31-year old industrial welder from Kuna, Idaho, with nine tattoos, so here's a guy who knows how to make decisions! He also thinks marriage is about finding the person that God had "tailor-made" just for him, so he is very important and the angels have surely stitched and sewn accordingly!!!

Justin is a 28-year old trainer from Naperville, Illinois, and I regret to inform you that he's only 5'11". UNBELIEVABLE. He's romantic and wants to own his own business, and apparently thinks marriage is a lot like being on a two-person synchronized swim team: "Loyalty, partnership, acting as a whole... in unison."

Kupah is a 32-year old entrepreneur from Boston who admires Mark Wahlberg, fears dull conversation, and responded with the word "FOOOOOOOORRRRRRRREEEEEEEVEEEEEEEER" in all caps when asked what marriage means to him, so hold onto your butts, everybody.

This 32-year old realtor from Wellington, Florida, is apparently trying to confuse me, because he's listed both Sliding Doors and Braveheart as two of his favorite movies. What's your game, you beautiful puzzle?

Hi hello quick question. What the hell is a "junkyard specialist"? Because that's what 28-year old Ryan M. from Kansas City, Missouri, is describing himself as. I'm gonna probably just keep imagining him rolling around in garbage like a man-pig and leave it at that. After all, we can always agree on his biggest date fear, which is "the person being terrible." I hear that, Ryan M.

I think they have a quota for the amount of fitness professionals on the show every season, and luckily we're almost there. Shawn B is a 28-year old personal trainer from Windsor Locks, Connecticut, and if he could be someone else for the day, he'd want to be his dog. Dream big, my friend.

My 31-year old friend Shawn E here from Ontario, Canada, describes himself as an "amateur sex coach," which I think is the marginally more professional way of saying, "Hi, I'm Shawn E, and I'd like to watch you have sex." And as if that wasn't enough to turn you off, he also has a fear of passing gas and is only 5'11", so the other dudes will be TOWERING over him and smelling his farts.

Tanner is a 28-year old auto finance manager from Kansas City, Missouri, who jumped into position as one of my front-runners purely for having a first date fear that wasn't based on the other person. Other dudes have said her having bad breath or not being interesting or being rude, but Tanner's answer was "my date not liking me as much as I like her." Respect! That's an early indicator that he isn't into the cocky posturing of the other guys, so I'm all in.

Oh Tony, you sweet sweet treasure. I knew we had to end on a high note, and it's with this gem, a 35-year old from St. Louis, Missouri, who describes himself not as a doctor, but as a healer. Can't wait to find out what that means, but I'm predicting some laying on of hands.

More like this
It’s Official: 'The Bachelorette' Is No Longer A Fairy Tale
By Samantha Allen
Former 'Bachelor' Producer Elan Gale Knows The Secret To Your Favorite Shows
By Samantha Rollins
Gabby & Rachel Reveal How That 'Bachelorette' Rose Ceremony Twist Happened
By Grace Wehniainen
'The Bachelorette's Tino Is Dividing Fans Over His Reaction To Rachel's Group Rose Choice
By Brad Witter
Get Even More From Bustle — Sign Up For The Newsletter