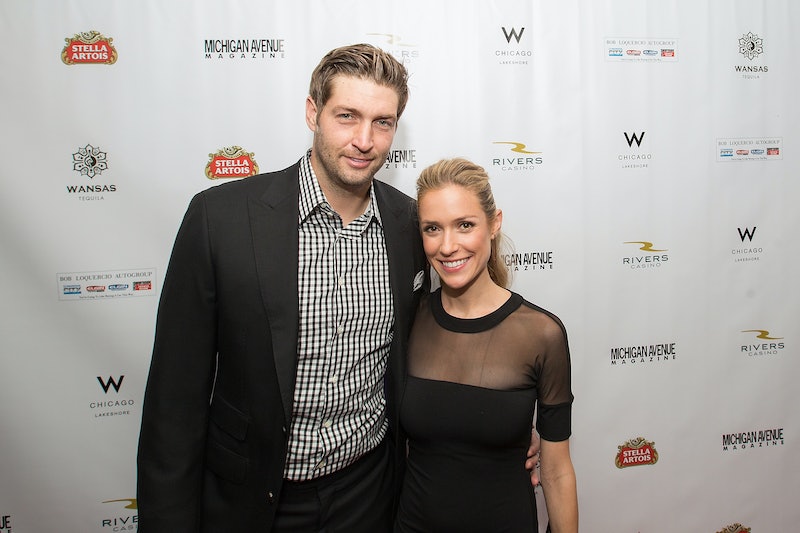 You could never have convinced me as a Hills fan that Kristin Cavallari would be the one cast member who would end up the most conventionally "settled down." I need to remember that she is no longer that 18-year-old girl going on trips to Cabo with her BFFs and getting involved in dramatic love triangles with Brody Jenner — after all, she's 28 now and a lot has happened. In 2010, the reality star's life changed when she started dating a Chicago Bears quarterback, so how did Kristin Cavallari and Jay Cutler meet, anyway?

Their story seems to have begun around 2009. In a 2013 interview with A Drink With, Cavallari openly shared that Cutler was the first to show interest and that it was from a distance. She said,

I will tell you what really happened. I got a call from my publicist that Jay wanted to fly me out to Chicago and take me out. I didn’t know who he was! I had to google him. I was in the middle of filming The Hills so I was like, “I don’t want a boyfriend in Chicago,” and passed on it.

Well, she's definitely a girl who knows what she wants. After she finished taping The Hills, she found herself at a pre-season game. Coincidence? Maybe it was fate. She continued,

A year later I was here [in Chicago] visiting my mom and we ended up going to a pre-season game. I had forgotten all about it and my mom said, "Didn’t Jay Cutler ask you out?” Long story short I ended up meeting him and when he walked in I was like, "Oh my goodness!" I thought he was really cute.

After that meeting, it didn't take very long for something to blossom. By January 2011, she was already telling press that she was "in love" and the two were reportedly engaged by April of the same year. Three months after they got engaged, the couple called off their impending wedding and Cavallari was left "devastated." Wow, that is a lot to have happen within such a short time span, but real love will always find a way.

Later that year, she appeared on Dancing With the Stars and fans were shocked to see Cutler cheering her on in the crowd. The couple confirmed that their engagement was back on, and soon after that, they announced they were pregnant with their first child, Camden, who was born in August 2012. Less than two years later, they welcomed their second son, Jaxon.

And they show no signs of slowing down. On May 11, 2015, Cavallari announced that she was once again pregnant and would be welcoming baby number THREE! She shared the news via her Kristin Cavallari app (who knew?) and said, "We're at it again! Thrilled to announce baby number 3 is on the way! The cutler crew just keeps growin'!"

Now, the couple seems to be more in love than ever. Cavallari shared with Michigan Avenue Magazine after the birth of their second child:

Jay is a great dad... He's incredibly hands-on, and he has been since day one. It's so sweet seeing him with Camden and Jax, and there's nothing sexier than seeing your husband as a great dad. I couldn’t ask for a better partner in this situation.

A huge congrats to the couple!