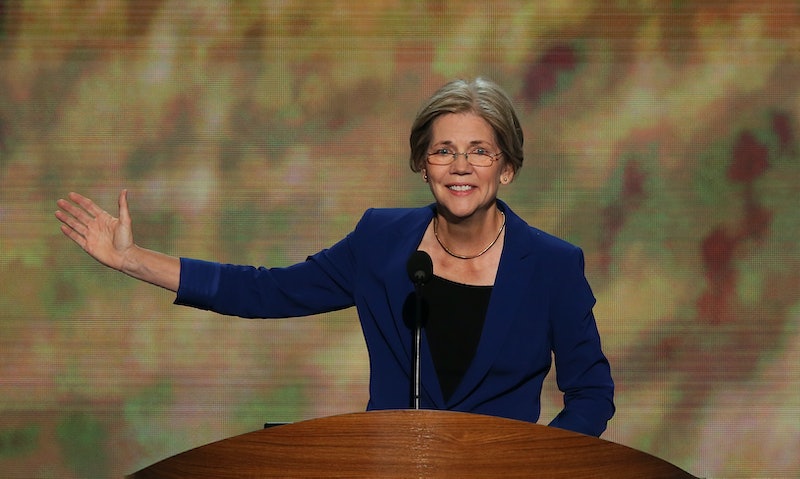 Strange news in the Harry Potter world today, folks. J.K. Rowling just announced the middle name for the character Myrtle Warren, aka Moaning Myrtle. According to Rowling's Twitter feed, Moaning Myrtle is actually named Myrtle Elizabeth Warren. And even though Rowling quickly told Twitter followers that this was not meant to be a reference to the American senator Elizabeth Warren, once it's been said, it can't be unsaid.

I mean, I know that people have been theorizing that the Harry Potter series might have a big impact on American politics, but this is just something else entirely.

Moaning Myrtle was never my favorite character from the Harry Potter books, although it's hard not to feel sorry for her. Myrtle was at Hogwarts at the same time as Tom Riddle, who of course grew up to become Voldemort. One day after being bullied by her classmates, Myrtle went to cry in a bathroom that, unbeknownst to anyone but Riddle, served as the entrance to the Chamber of Secrets. When the basilisk emerged, it looked into Myrtle's eyes, and she died instantly. During Harry's time at Hogwarts, her ghost mostly spent a lot of time haunting the bathroom and crying, though she did show up for various important plot points throughout the series.

But what if Myrtle was actually more like her sort-of-namesake? What if, say, she was actually like Hermione during her school days, organizing political movements and taking on the powers that be? What if she'd been crying in the bathroom because her classmates wouldn't take her big ideas seriously? What if, in fact, Elizabeth Warren had been in Myrtle's position all along? What would that have been like?

She Probably Still Would Have Wound Up Stuck Back At Hogwarts

In the books, Myrtle originally spent her afterlife haunting the girl who bullied her, Olive Hornby, until Olive finally petitioned the Ministry of Magic to make her stop. The Ministry sent Myrtle back to Hogwarts. If Myrtle had been Elizabeth, I have a feeling they might have done the same thing, but because Elizabeth was bothering them rather than one of her classmates. Elizabeth Warren has spent her career breaking through barriers and persevering through adversity. If she suddenly developed the ability to walk straight through walls and talk to the people in power directly? You can bet she'd have taken advantage, possibly to the point they would send her back to Hogwarts in order to make her stop.

The Chamber of Secrets Would Have Been Found a Lot Faster

Although Myrtle was the last victim of the Chamber of Secrets in her own school days, once the Chamber was opened again during Harry's time in school, you can bet that, had Myrtle been more like Elizabeth Warren, she would have gone to work investigating the matter. And with her brains and her tenacity she probably would have put the pieces together a lot faster than Harry did. The second book would have been a lot shorter, I guess.

She and Hermione Would Have Been Great Friends

Both Elizabeth Warren and Hermione Granger have proven themselves interested in championing just causes and campaigning on behalf of the vulnerable, Warren through her work protecting American consumers and Hermione with her efforts to ensure more rights for house elves. If they ever met at Hogwarts, I doubt it would have mattered that one was a ghost and one a living girl. They would have been best friends. In fact, if someone wants to write that fan fiction, I am all about it.

She Could Have Seen Harry Naked

In the fourth book, Harry Potter and the Goblet of Fire , Harry takes Cedric Diggory's advice and takes his clue for the Triwizard Tournament to the prefect's bathroom in order to unlock it's real meaning. While he's there, who should he meet but Moaning Myrtle! And although Myrtle promises that she covered her eyes when Harry first got in, before all the bubbles in the bath covered everything up, who knows if she was telling the truth. So basically, if Elizabeth Warren were Moaning Myrtle, she would have had the chance to see Harry naked.

She Would Have Had Way Better Advice For Draco Malfoy

In the sixth book, Draco Malfoy confides in Myrtle when he can't talk to anyone else about his problems. And if Elizabeth Warren had been the one he talked to, assuming she was willing to talk to him at all, she probably would have been way better at giving advice and helping him work through his problems. And presumably would have given him a stern lecture about this whole belonging to an organization that includes genocide as one of their goals. Elizabeth Warren does not have patience for that nonsense.

Voldemort Never Would Have Stood a Chance

In addition to Harry's many other allies in the fight against the Dark Lord, if he'd had Elizabeth Warren in his corner, too? Voldemort would have been extra doomed.