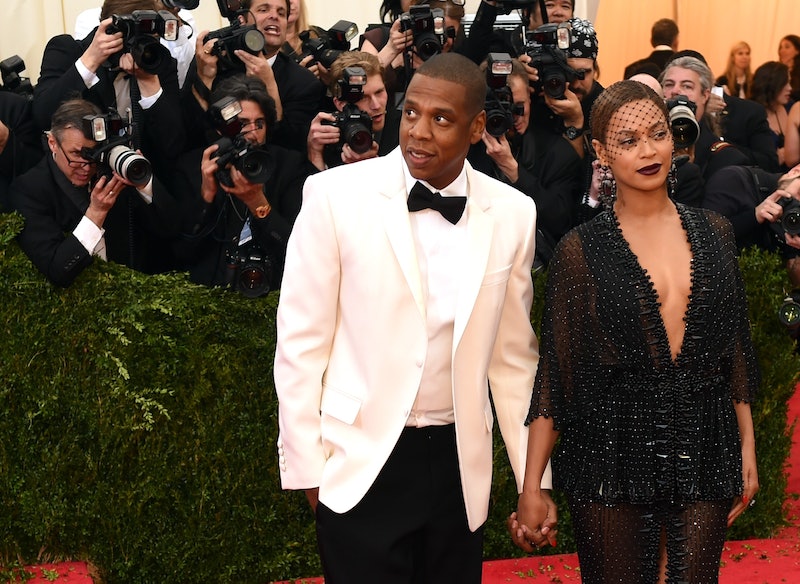 TIMOTHY A. CLARY/AFP/Getty Images
By Kadeen Griffiths
May 12, 2015

I know I begin almost every article by somehow mentioning that Beyoncé is my queen, but it looks like Game of Thrones fans should be calling Beyoncé "khaleesi." According to a Harper's Bazaar interview with Emilia Clarke, Jay Z reportedly bought Beyoncé a Game of Thrones dragon egg, because, when you're the King and Queen of Hip Hop, diamonds and private islands are just no longer enough. You know who is also the mother of the dragons? Khaleesi Daenerys Targaryen on Game of Thrones. So, if Beyoncé is in the same league as Dany — minus the part where dragons are real — then she has reached a whole new level of royalty and we are just not ready. That is, if this rumor is even true, but I'm inclined to believe it just for the sheer fact that I've already been worshipping Beyoncé as a queen to this point.

“Apparently Jay Z bought [a khaleesi dragon egg] for Beyoncé, or something. I don’t know," said Clarke. "They are really, really, really expensive. And they are really f***ing heavy and serious works of art." It wouldn't be the first time, nor will it be the last time, that Jay Z and Beyoncé are accused of using their bathtubs full of money to buy each other ridiculously expensive gifts that have absolutely no practical use or logical explanation. I mean, if I was rich, trust me when I say I would have an impractically heated solid gold toilet seat at my disposal.

However, we are neglecting the important evidence here: Beyoncé is the queen. In fact, she's more of a queen than Dany.

If dragons were real, we'd probably be trying to gun them down in the air before they laid waste to the countryside or something, but then Beyoncé would glide to the center of the battlefield and begin singing a medley of her greatest hits. Suddenly, the dragons would bow their heads in wonder. She has been found. The Once and Future Queen. The Khaleesi. And she sounds like an angel.

2. She's Already Taken Over The Kingdom

Dany might be in the middle of a campaign to get her kingdom back, while poking into a bunch of other ones on the way, but Beyoncé already runs the world. She wrote a song about it and everything. Actually, she wrote several songs about it. It's Beyoncé's world, and we're just living in it.

Is it too soon to bring that up? I mean, Jay Z is still alive and Khal Drogo...

4. She Wins Every War

Do not step to Beyoncé. You will not win. From Elevatorgate to her leaked Platinum Edition album, every time the world thinks they've got Beyoncé on the ropes, she hits us back with a well thought out statement or an epic music video that make us wonder why we ever doubted her at all.

5. There Is An Heir To Her Legacy

She is the one called Blue Ivy, and, even when Beyoncé's legacy has come to an end, there is another. Whether or not she shapeshifts into a dragon has yet to be determined.

6. Really, All She Needs Is The Iron Throne

I think the only reason Jay Z probably didn't buy her that is because of how horrifically uncomfortable it would be to sit in, not to mention the unnecessary fear of Blue Ivy injuring herself on it. Besides, Beyoncé probably has sixteen thrones at home to sit on, lounge in, and eat dinner in or whatever. As all queens do.

More like this
The Meaning Behind Beyoncé’s Song "SUMMER RENAISSANCE" Includes A Special Tribute To Jay-Z
By Alyssa Lapid
The Controversy Around Beyoncé's “ENERGY”, Explained
By Frances Stewart
Everything To Know About Beyoncé's New Album
By El Hunt and Radhika Menon
Beyoncé & Madonna’s “Break My Soul” Remix Honors A Group Of Black Icons
By Stephanie Topacio Long
Get Even More From Bustle — Sign Up For The Newsletter