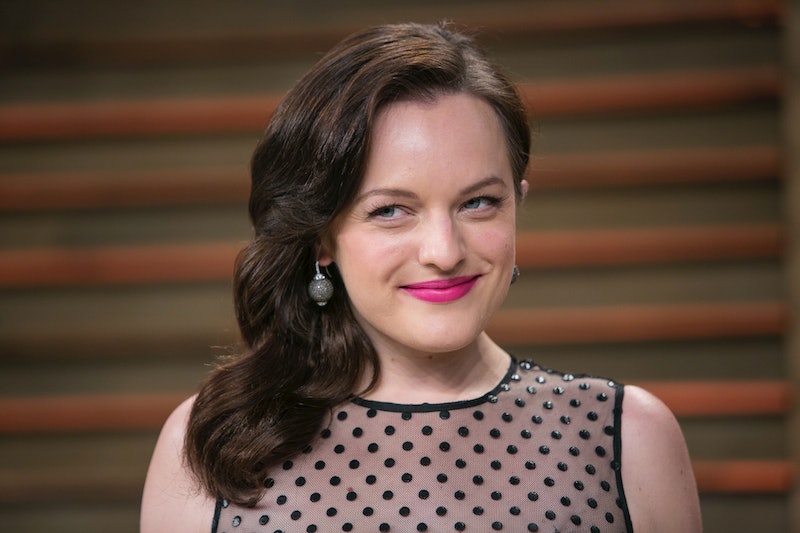 A rousing game of Mad Men-themed F--k, Marry, Kill is always fun. It's even more fun when the person playing the game is on Mad Men, and specifically when said person is Elisabeth Moss, whose fictional character, Peggy Olson, we all not-so-secretly want to marry/be. In a recent red carpet interview with Vulture, Elisabeth Moss played F--k, Marry, Kill with Mad Men characters. And odds are, her "marry" pick is probably the same as yours.

Vulture narrowed her marrying, killing, and effing choices down to Stan, Pete, and Stevie. She reportedly took her time to answer. After all, one shouldn't take their FMK choices lightly. But after a minute of pensive chin-stroking and gazing off into space that was likely accompanied by the Jeopardy waiting music, the IRL Olson gave her verdict. She said:

Marry Stan, kill Pete, and then … my mother’s here! So yeah, Stevie.

First of all, with I'm with her ALL the way on marrying Stan. He has a great sense of humor, a really attractive mountain man look, and an earnestness that the rest of the characters lack. Sniveling Pete from Seasons 1-5 is a pretty good kill choice, but lately, he's been growing on me. And I'm glad Moss went for the earnest dude her character almost went to Paris with for her "f--k" choice. Sounds like something Peggy would say. Then again, who would Peggy Eff, Marry, or Kill if given her choice of all the characters?

Pegz and Stan already have a work marriage that sometimes bleeds into non-work related matters, like killing vermin in her apartment. Now that they don't work in the same department, I would say that Olson and Rizzo have a good chance of working out. Hence, I'd say Stan is the most marriageable candidate.

It's probably gonna have to be Stevie, of the infamous really good date that resulted in Paris plans which never transpired. The untasted fruit is always the most tempting. Honorable mention goes to Roger, because it seems like it may be kinda fun, provided he doesn't have a massive coronary.

We've got a few pretty good choices in this category. One, of course, is Pete, who took advantage of her in Season 1, left her pregnant, and treated her like dirt in the aftermath. Another great choice would be Duck Phillips, who she had that embarrassing and sordid affair with. He is also not nice to his dogs. Then, there's Ted Chaough, whom she legitimately loved but who turned out to be a scoundrel like the rest of them. Then, there's Lou Avery, whom everyone would like to kill. With all those formidable candidates, I would say she'd kill Lou. He was literally the worst boss, he didn't respect her creative genius, and the world really doesn't need another cartoon dog.

More like this
Mollie Gallagher Has A Deeply Personal Reason For Taking Up Skating
By Maxine Harrison
Bill & Frank’s 'The Last Of Us' Episode Has Twitter Emotionally Wrecked
By Alyssa Lapid
Netflix Shut Down 'Bridgerton' S3 Rumours About A “Very Dark” Storyline
By Bustle
This 'Gossip Girl' Wardrobe Error Has Gone Viral On TikTok
By Alyssa Lapid
Get Even More From Bustle — Sign Up For The Newsletter
From hair trends to relationship advice, our daily newsletter has everything you need to sound like a person who’s on TikTok, even if you aren’t.