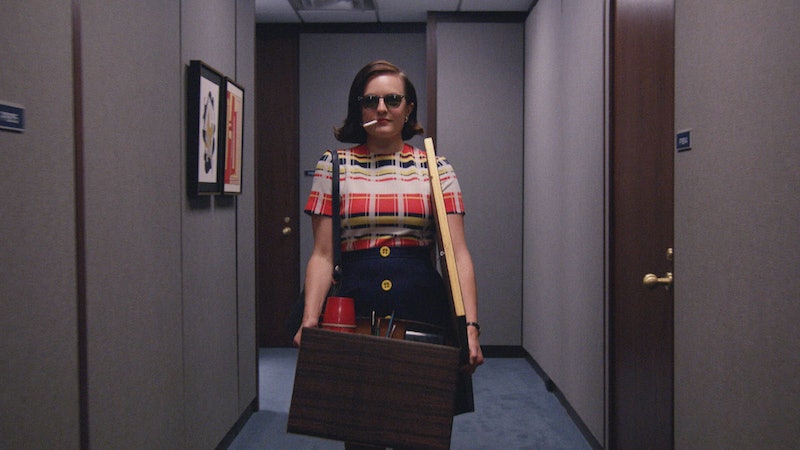 Peggy's come a long way from shy, nervous secretary on her first day of Sterling Cooper. Now, she waltzes into her newest position at McCann-Erickson with a cigarette hanging out of her mouth, and clutching a portrait of an octopus pleasuring a woman, because why not? This is the Peggy we love, because she knows not only that she can get the job done, but that she owns the job. I can't wait to have a baby girl one day, and name her Peggy, and then spend a few weeks watching Mad Men with this small child to show her the woman behind her strong and fierce name.

It's always a good time to look back on Peggy moments that have given us life, and over the last seven seasons, there have been plenty. Here are 12, because like Peggy, we don't have all day. Enjoy and then get back to being the boss that you are.

1. When Peggy Reminded Everyone Who's Really In Charge

Once upon a time, a new hire named Michael Ginsberg was all over the place, and Peggy needed to snap him back to attention, and also command his attention. (In the end, let's assume that he didn't impress her?)

2. When She Said Exactly What Was On Her Mind

The smile at the end of this is life. She's telling you she doesn't care, and she does it so politely! Don't bother Peggy with your menial tasks and issues, OK?

3. When She Said What We Were All Thinking About Sterling Cooper and Partners

Peggy constantly proved that she was the right man for the job.

4. When Peggy Had The Best Time Ever With Her Cat

How is it NOT an awesome evening to hang out with your cat, kick back, and watch TV? Peggy knows how to live.

5. When She Reverse-Prank Called Don

It takes a lot to stand up to your boss. Peggy stood up to Don all the time, because she refused to be thought of as less than him. And then there's that one time he called her while she was working late, and she just didn't have time for it.

6. When She Used Her Sexuality For Good

Try and deal with this, Ted.

7. When Everything Fell Apart, And We All Cried Because Peggy Was Crying

You know what Peggy? Sometimes it's OK to just cry it out in your living room. We're here for you. You are all of us.

8. When Peggy Had A Long Day

Peggy, if you're thinking that you're surrounded by idiots, it's because you are.

9. When She Stood Up To Stan For The First Time

Peggy and Stan are my favorite "couple" on Mad Men , and they're not even a couple. They started out enemies, and then became frenemies, and now they're friends.

10. When Peggy Took Roger For All His Money

One of the best moments of Mad Men is when Peggy realizes that Roger has no idea how much she makes a week. So, yeah, if he's going to force her into doing last second work, she's going to be nicely compensated. You didn't dazzle her enough, Roger.

I don't really follow or get sports, but I cheered like my sports team had won the big game when Peggy sat down in Don's chair, spun in just the right way, and gave us a taste of that silhouette. It was everything.

And then that one time I realized Peggy had walked down a lot of corridors, holding boxes, but now she's not being led somewhere she's going somewhere.