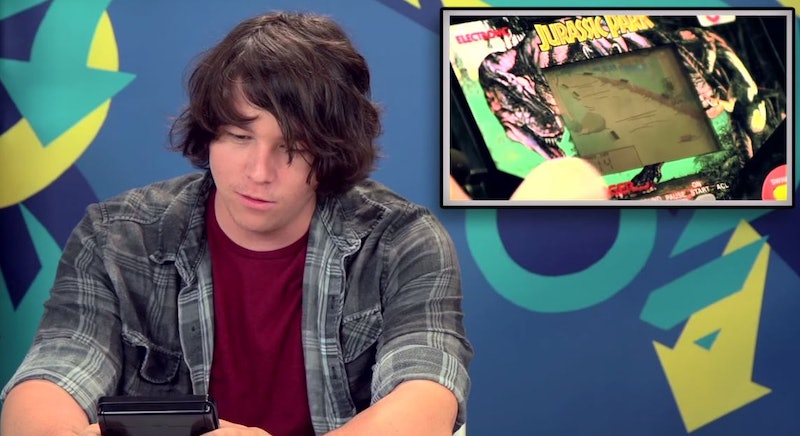 Well, the Fine Brothers had a bunch of today's youths react to the technology of yesteryear again, and this time? They took on something those of us of a particular age alternately loved and loathed: Tiger Electronics' handheld video games. In the video “Teens React to '90s Handheld Games,” our regular panel of teens play two handheld games made by Tiger Electronics in the early '90s — which, if you're under the age of 20, may not be something you remember. But if you're a little older, like I am? Hoo boy. These things were everywhere when we were kids.

In an era before the Game Boy — or at least, in an era in which the newly-released Game Boy was seen as monstrously expensive and therefore infrequently encountered — Tiger Electronics' handheld video games were an acceptable, if somewhat dopier, substitute. Each device held only one game, and the LCD graphics were so rudimentary as to be almost non-existent. We loved them anyway, though, because being able to take your games with you wherever you went? That was a totally new experience, especially for a generation of children who didn't grow up with cell phones being a fixture in our lives.

It's worth noting that these kinds of handheld electronic games actually predate the '90s. Since I had memories of playing them in the kitchen of the house my family lived in between 1985 and 1990, I did a little digging — and sure enough, a good deal of Tiger Electronics' offerings were released in the '80s (like this Batman movie tie-in one, which hit toy stores in 1989). The Bo Jackson football/baseball game the teens in this video play was released in 1990 — which, for all intents and purposes, was still the '80s. It always takes a new decade at least three years to separate itself from the previous one, stylistically speaking. Oh, and for the nostalgia hounds among you, I highly suggest checking out the website Handheld Museum; it'll bring back a rush of memories for you. I promise.

So did our intrepid teens fare? Here are a few choice reactions:

1. Any Idea Who Bo Jackson is?

This guy definitely wasn't alone when he said, “Never heard of him.” To be fair, I mostly remember Bo Jackson from the “Bo Knows” ad campaign, because I didn't (and still don't) follow sports. Still, the fact that most kids today have no idea who he was is a reminder that even the biggest stars will one day be forgotten purely as a casualty of time.

“Oh, I hate that noise,” said this fella. All I can say is, it's a good thing you weren't around when that was the only noise video games made.

This girl? She is my favorite, because she perfectly encapsulates everything you need to know about these kinds of games: They are SO FRUSTRATING… and yet you can't stop playing them. This often results in frequent sounds of inarticulate rage emerging from test subjects.

This girl can't tell, which is a totally valid response.

This kid, however, just scored a touchdown, so he's definitely having fun.

So did this one. Why is he so blurry? Because he's jumping up and down and yelling “FLEX!” For reals.

You know what I found more interesting than watching the kids of today play the games of yesterday? The unexpectedly astute observations they made after playing them. They recognized that, while the technology has changed, our obsession with it hasn't; they drew parallels between the simplicity of these games and the one-button apps and games that seem like they're everywhere these days (One Finger Death Punch, anyone?); and they pointed out how good a marketing tactic having a game for every popular entertainment franchise is. I don't know about you, but while these sorts of “Kids React” videos may have started out as a gimmick, I actually think they're pretty useful. They allow different generations to stay connected, and the more aware we are about where we've come from and where we're going, the better.

The kids also played the Jurassic Park tie-in game; watch the full video below to see it in action. At least we can take comfort in the fact that movie tie-in games are still usually awful today. Some things never change!