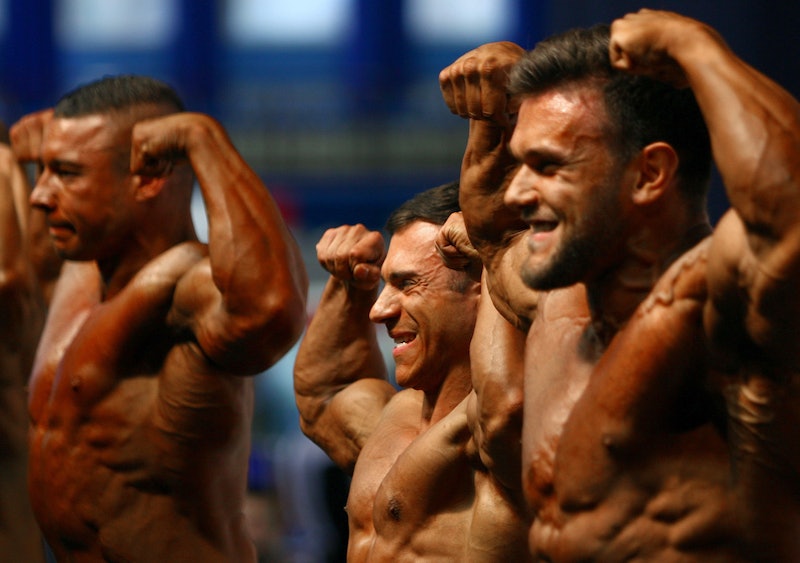 Early last semester, the porch on my apartment was declared a "no flex zone," so that both our guests and residents could experience a space in our relatively big, six bedroom Boston abode free from flexing. Flexing can become a problem, especially when you're young, wild, and free and the world seems to be your oyster — it's around this time that most people who will be flexers for the rest of their lives begin flexing and also the time when people who are just occasional flexers start to try out their flexing game. But what does "flex" mean in the slang sense of the word?

In the possible case that you have no idea what I'm talking about, let me explain. According to the Urban Dictionary, the verb "to flex" essentially has one of two meanings. It can mean to show off, to gloat, or to boast, which is the most popular definition of the word; however, it can also mean to put on a fake front, to fake it, or force it. The second definition is usually used in conjunction with the first — as in, someone who's gloating about something that they've really got no right to gloat about, lying about an accomplishment, or exaggerating the truth.

This usage of "flex" is most popularly used in rap and hip hop, but can be heard elsewhere as well. Here are some examples of lines rappers and other artists have used that will illustrate proper usages of the word:

"Ain't gotta flex but I got it" - Rich Homie Quan

While flexing and the idea behind it have been popular for a long time, it was recently re-popularized by Rae Sremmurd, a hip hop duo comprised of two young brothers who were both under 21 around the time their song was released. The catchy lyrics and surprisingly well-produced and clean music video made this song an instant hit and birthed the idea of a "no flex zone."

While no flex zones are certainly necessary in order for people to chill out, act like themselves, and not be subject to other people showing off or forcing it, it's also important to remember that it's OK to flex sometimes. Indeed, for every flex free zone, there should be a flex friendly zone so people can celebrate themselves and their accomplishments, as well as flex for their friends and family. It's important to strike that balance and know there's a time and a place for both. But let's face it: Sometimes you can't help but flex a little even in the no flex zone.