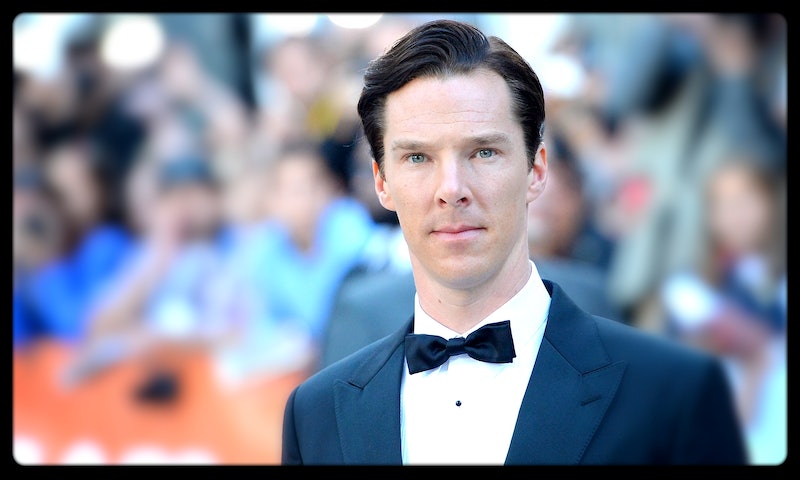 This year, 2013, was the year of Cumberbatch (at least that’s what we’re calling it at Bustle). The tall drink of British captivated audiences in a few small projects like Star Trek Into Darkness and that BBC series Sherlock everyone keeps going on about. You know, those little things. When he wasn’t busy working on this year’s biggest Oscar contender (12 Year’s a Slave) or being named the sexiest male movie star in the world by Empire Magazine (seriously, watch Sherlock — never before was “taking off a scarf” considered to be sexy until Cumberbatch did it), he was busy ruling the Internet and becoming a walking, talking meme. It seemed like any appearance the actor made on a talk show or any interview he gave was instant Interweb fodder. Just look what happened when he snapped a silly photo on Top Gear:

Not that any of us are complaining, though. The Cumbereffect, Cumberappeal, Cumberness, or whatever you want to call it, is a combination of talent, charm, mystery, and cheekiness. In fact, here at Bustle, what we find so disarming about Cumberbatch is his deliciously wry SASS.

That’s right, the should-be spokesperson for tweed is an unadulterated sass-machine. Though you’d like to imagine Cumberbatch swaddled in wool by a cozy fire in the English countryside reciting a bit of poetry (no? just me?), he’s actually more likely to be throwing some serious shade and slamming you and your friends with his own brand of Cumbersass.

Shoots Cover of TIME Magazine: BRINGS HIS OWN CLOTHES.

Don’t Call Yourself a Cumberbitch

Looks like Benedict Cumberbatch isn’t down with his fans referring to themselves as “Cumberbitches.” The actor noted in an interview with the UK's The Times, “It’s not even politeness. I won’t allow you to be my bitches. I think it sets feminism back so many notches. You are… Cumberpeople.”

He just sassed his fans about feminism and we are pro-everything-about-that. We also love that he ran out into the audience to hug his devoted fans who traveled THOUSANDS of miles to see him on the Graham Norton Show. I think he’ll make us all Cumberpeople if he keeps up with all of this charm.

Don’t go there, Fallon. DON’T YOU EVEN. Cumberbatch will call you OUT. The clip also features the phrase “that sounds like a Russian oligarch cocktail.” Who else can sass like that? NO ONE.

In case you missed it, Benedict Cumberbatch was delightful on Reddit while promoting The Fifth Estate. He was throwing around one-liners and teasing fans like the King of Sass that he is. When asked “do you, Matt Smith, and Tom Hiddleton have cheekbone polishing parties?” Cumberbatch responded:

And naturally, the Internet got to work on it:

Benedict Cumberbatch is the voice of Smaug, the giant fire-breathing sass-dragon in the latest installment of The Hobbit series. Catch Cumberbatch snarling at the end of the trailer, “I am the king under the mountain.” If that’s not enough to make you pee your pants a little, check out these behind the scenes shots of the actor doing some crazy Motion Capture sassing.

Teased all of Comic Con

Star Trek, The Simpsons, The Hobbit AND Sherlock? Man oh man, did Benedict Cumberbatch rule geeky fame this year. Everyone is dying to know what’s in store for Season 3 of Sherlock and Benedict Cumberbatch is one coy devil about it. We caught stuffed monkeys and “Cabbage.” FINE THEN BENEDICT, HAVE IT YOUR WAY.

While filming the third season of Sherlock, the actor threw some serious sass to the paparazzi, holding up a sign that read: “Go photograph Egypt and show the world something important.” He sasses for a cause and we fully support that.

If You Make Him Into a Meme, He’ll Correct Your Continuity

Meme, mem, MEH! AT 5:54 Cumberbatch confronts his Otter Memedom and points out the errors in the comparison. The otter doesn’t stop there. The meme was brought up later on an interview with David Letterman and the actor served up some more delightful Cumbersass with a side of sick burn.

“You look great, I wish more people took a hint from you.”

“I agree, what can you do. People are sloppy.”

He’s Not Your Impersonation Monkey, Graham!

It’s come up on interview after interview that Benedict Cumberbatch is really, really good at doing impersonations. While sat next to Harrison Ford, chat show host Graham Norton called out his Chewbacca-bilities — to which the actor happily obliged, but not without doing his own cheeky impression of Norton first.

Melted the Internet By Doing the Harlem Shake... With His Hand

Will you ever stop taunting us Benedict, WILL YOU? The Harlem Shake was one of the biggest viral sensations of the year and Benedict Cumberbatch was part of the trend. We all just got slapped with some Cumbersass.

Seven seconds in and the actor throws Cumbershade when being asked about the title of “Sexiest Movie Star.”

More like this
Twitter Is Losing It Over Beyoncé's "ALIEN SUPERSTAR" & These Memes Prove It
By Radhika Menon
Kathy Hilton Tried To Explain Why She Misidentified Lizzo As Precious On Live TV
By Jake Viswanath
Sophie Turner & Joe Jonas’ Fave Taylor Swift Album Is Full Of “Bangers”
By Sam Ramsden
The Sean Bean Intimacy Coordinator Controversy, Explained
By Sam Ramsden
Get Even More From Bustle — Sign Up For The Newsletter