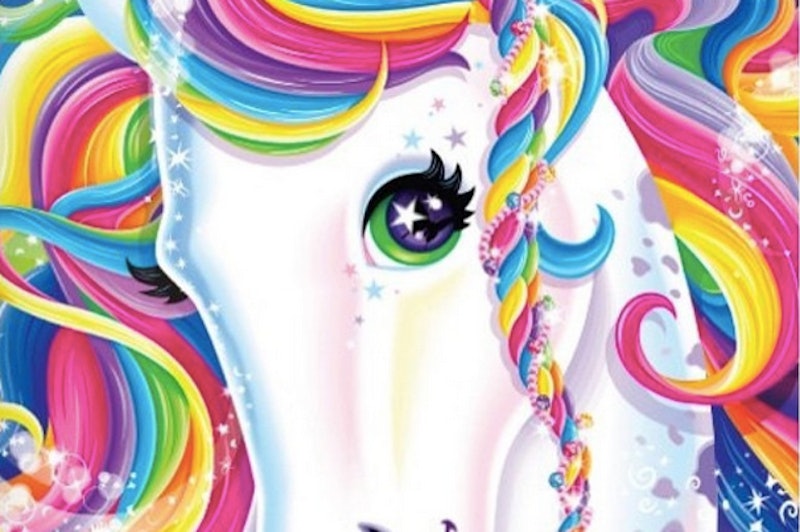 I have no idea what genre Lisa Frank actually falls into. Fab feminine comic books on acid with an elementary school twist? Lisa Frank images aren't so much graphic novels as they are a grade school accessory; a vibrant learning instrument. Yeah, let's go with that. Thanks to meme extraordinaire Alex Richmond, Lisa Frank is about to become even more of a power house: This feminist Lisa Frank Tumblr is putting your old, sparkly school supplies to shame.

Earlier this year, I actually bought all my friends Lisa Frank calendars for their "holiday" presents. It wasn't one of those cute, premeditated sort of gifts. It was more like that last moment in an afterthought where you realize you're the one bad friend who forgot to buy everyone a present and you duck into a Newbury Comics hoping to find something ironic for under $8 in under 10 minutes. It half-worked. I managed to pass the off the Lisa Frank calendars as semi-hilarious presents, and spent very little money. Something that could've really helped me? THIS TUMBLR ACCOUNT. I could've just sent my lovely friends a link and called it a day. That's how you save money.

Presenting, the account that's "dismantling the patriarchy one rainbow kitten at a time":

"We are the women our parents warned us against. And we are proud." - Gloria Steinem

"I want my daughters to grow up in a world in which there is more love than hate. I want them to know a world where everyone is free." - Shonda Rhimes

(This Tumblr had me at Shonda Rhimes.)

"There is no simple monoliths solution to racism, to sexism, to homophobia. There is only the conscious focusing within each of my days, to move against them, wherever I come up against these particular manifestations of the same disease." - Audre Lorde

"The harder a man feels compelled to be, the weaker his ego is. And then we do a much greater disservice to girls, because we raise them to cater to the fragile egos of males." - Chimamanda Ngozi Adichie

"Feminism has fought no wars. It has killed no opponents. It has set up no concentration camps, starved no enemies, practiced no cruelties.

Its battles have been for education, for the vote, for better working conditions…for safety on the streets… for child care, for social welfare…for rape crisis centers, women’s refuges, reforms in the law.

"Popular culture is like the air we breathe. It's in everyone's interests to make sure that air is not polluted with poisonous sexism so that we don't all end up with hideous misogynist mutations growing out of the back of our collective heads." - Anita Sarkeesian

For more Feminist Lisa Frank, follow her on Tumblr.

Here are 5 more feminist quotes to inspire you. We're hoping our Tumblr guru will add them to a Lisa Frank graphic for us: