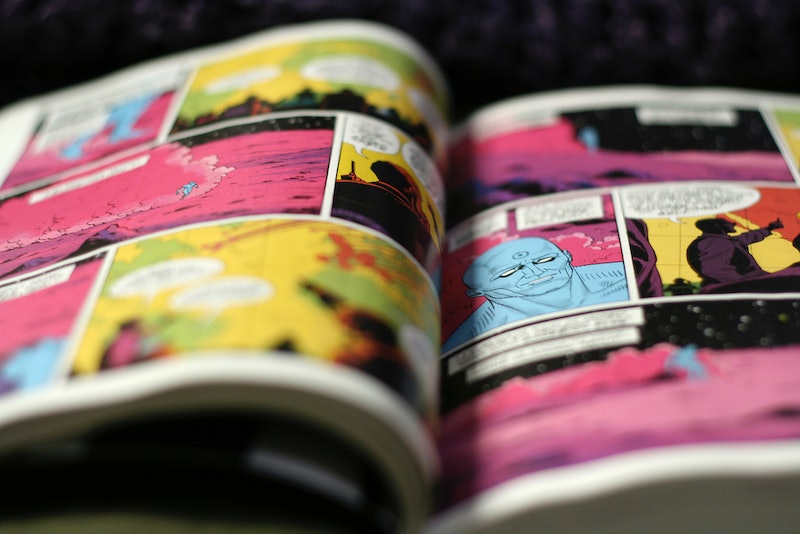 Remember the simple days of childhood when categories of people were simple? You could be a Jock, a Clown, a Little (my term for those girls with delicate bone structure who made my life hell), or a Reader. And when you found a fellow Reader, you held her dear (by which I mean, you smiled at her awkwardly over your copy of A Separate Peace ). Ah, youth.

But now we're grown up and have access to a world of Readers. And some of these readers can be pretty douchey. These Readers are the inventors of "Have You Read" Poker. Here's how you play: Go to a wine-and-cheese party in Brooklyn. Eventually, someone you don't like much will tell you about the marvelous book he's reading about child soldiers in East Africa. Or he'll try to quiz you on your knowledge of John Milton. Maybe, just to prove a point, he'll perform a compare and contrast of various manifestations microeconomic reform in Australia while he's topping off his glass.

If you're a Reader and a grown up, this may sound very familiar to you. And if you read graphic novels, you definitely know what it's like to meet this person at a party and have him tear apart the books you love. The sad truth is that there are too many people who think that graphic novels aren't hard enough to read, and therefore unimportant. So when you talk about how accessible your favorite book by Alison Bechdel or Marjane Satrapi is, these people are just itching to put you down for it. I know it's tempting, but don't tell them to shove Australian microeconomics straight up their bums.

Instead, the next time a merlot-toting, Steven Levitt-wannabe hits you with one of following remarks, roll your eyes. Then set him straight.

1. Graphic novels are for boys

Women do tend to get ignored when it comes to be celebrated as artists or sought as readers. But the times, they are a-changin'. The people that say graphic novels are a boys thing need to read Kelly Sue DeConnick's Captain Marvel — possibly the most badass lady super hero ever. Besides you, of course.

2. Graphic novels are for nerds

Yeah, and the point is? You know the person who tells you this can quote all of the Harry Potter books verbatim, so don't let him give you any crap. Instead, give him Sculpture .

3. Graphic novels are for nerdy boys who will never get to look at real boobs

You do not care about fighting evil or capes (OK, maybe a little bit capes, but only because you think you might be able to pull one off). Graphic novels can be about real humans. Look at Fun Home by MacArthur Genius Alison Bechdel.

Tell Sailor Moon to simmer down. And don't let her condescend to anime — it can be real. Look at how Aaron McGruder used the form to talk about race in America in The Boondocks: Because I Know You Don't Read the Newspaper.

6. Oh, do you mean books with pictures? Are you talking about picture books? Do you like books meant for children?

Tell this person you know she reads Twilight. Then prove your superiority with Safe Area Gorazde by Joe Sacco. Hell yes, there's a graphic novel to teach you about the Bosnian War. And nothing is more grown-up than knowing about Bosnia.

7. They're just comic books that are trying too hard

Your mom is a comic book that is trying too hard! I mean, have you read Over Easy by Mimi Pond? She has a light touch and an easy style. You know, like your mom, last night.

8. They're just books for people that don't like to read

Tell this person to stop being cruddy, then give them Cruddy . It's got a lot of words, and they're good and mean.

9. They're just books for people who can't read. Can you read? Did no one ever teach you to read?

Yeah, you should burst into a fit of tears and tell this person you can't read just to see how long they'll buy it. Can I suggest some classic tactics such as holding a newspaper upside-down or weeping in front of street sign? When the jig is up, hand her Hark! A Vagrant . If you're illiterate, how come you find wisecracks about Jane Austen to be hilarious?

Well isn't that exactly what people said to the Impressionists, to the Transcendentalists, and to break dancers? All true artists are plagued by haters. And the drawings in graphic novels such as Shackleton: Antarctic Journey by Nick Bertozzi are ahem, wicked pretty. And arty as hell.

Well if this guy's attitude is that we shouldn't move language and expression forward, then he must really like drawings of buffalo on cave walls. Throw Persepolis at his forehead.

12. Graphic novels are for Nazis

OK, no one says this. But here's the thing: If you're this person and still refuse to believe that graphic novels are a legitimate art form, it's time bring out the big guns. It's time to give them Maus . That will put an end to this nonsense, forever. Because this is art: