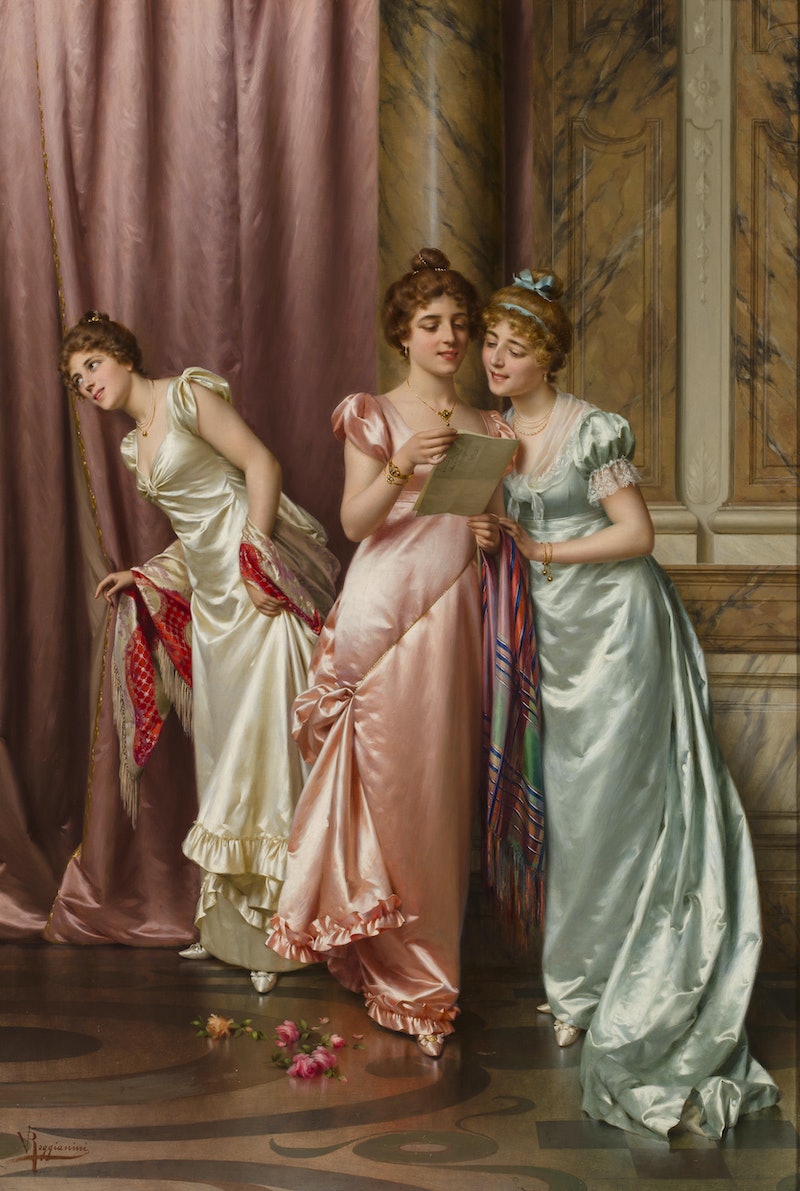 Ah, the 18th century: a time when "Tinder" was a thing you used to light a fire and eggplant emojis were hundreds of years away from becoming a thing. Men were gentlemen, ladies were ladies, and both of them had really, really weird words for talking about sex. Just like today's sex vocabulary includes funny euphemisms such as "crotch rocket," "vajayjay," and "bangability" (or is that last one just mine?), the 1700s were full of incredibly goofy sexual slang. In fact, there was so much of it that a man named Francis Grose put together the Classical Dictionary of the Vulgar Tongue to act as 1785's Urban Dictionary. The entire book is full of not-so-new but exciting ways to insult people and make references to brothels, but the fun goes far beyond taking your vocabulary on a time machine ride.

How to use it: "Your profile says you're into hockey, but after a night with me, you'll be a professional back gammon player."

How to use it: "You might be playing the guitar, but watching you play 'Wonderwall' for the third time in a row really makes me want to bagpipe you."

Meaning: According to Shakespeare, this is the collective noun for a man and woman having sex

How to use it: "I walked into your bedroom expecting to find you asleep, but instead, I found a beast with two backs. We're through."

How to use it: "Babe, all I want is your sweet monosyllable, but until you're home from work, I'll have to settle for getting cockroaches in my bed."

Meaning: A man who consistently sleeps with the same woman; surprisingly not incestuous unless you're Jaime Lannister

How to use it: "Girl, all these other dudes just want you for one night. But me? I wanna be your brother starling."

Meaning: Straight from the dictionary itself, "a lighted candle stuck in the parts of a woman, certainly not intended by nature for a candlestick"

How to use it: "Hey, hot stuff. I'm totally, definitely not a serial killer, but I saw this 'burning shame' thing and was wondering if you'd like to be my first victi — I mean, willing participant."

How to use it: "Are you up for a sexy, rough, pillow-biting round of basket-making tonight?"

How to use it: "Oppa gingambobs, baby."

Meaning: To have sex with a woman in the grass

How to use it: "That red dress is making me want to take you outside and give you a green gown. You know, because you'll get grass stains all over your body. Pls respond."

How to use it: "Don't worry, honey. I'm perfectly content hanging out with my new godeminche until you're back from your business trip."

Meaning: The dictionary's author is a bit too timid to fully define this, but based on an engraving from 1800 named "The Larking Cull," we can assume that this is what they called it before "titty banging" came into use

How to use it: "I forgot to take my pill last night, so can you just lark me instead?"

How to use it: "His lobcock-to-full-erection ratio was the biggest one I've ever seen. I have literally no idea where all that dick came from."

Meaning: A vagina; Also the invention I have in my closet just in case Chris Pratt ever finds his way into my house

How to use it: "Now that you've found your way into my man trap, Mr. Pratt, I'm never letting you get out!" *lightning flashes, ominous music plays, ovaries cackle maniacally*

Meaning: Lady bits, all of which definitely have more than one syllable. So I'm guessing this is a nice way of saying the c-bomb

How to use it: "I can't wait to have your tongue all up in my monosyllable tonight."

Meaning: Having a false erection

How to use it: "And when he finally managed to get it up, he ran to the bathroom and I realized he was just piss-proud."

How to use it: "His chiseled abs drew my eye down to the perfect 'v' at his hips, which pointed right down to his stiff member and dangling twiddle-diddles."

Meaning: To put your tongue in a woman's mouth, probably for a kiss, but maybe because you want a taste of the pie she just ate

How to use it: "I would have agreed to a second date if you hadn't tried to tip the velvet when I gave you a kiss on the cheek."

How to use it: "If you let me give you my run goods, we can practice more and have some run greats, and later some run awesomes."

Meaning: To have sex with a woman

How to use it: "You should feel proud; that queef was the musical result of you strumming me for two hours straight."