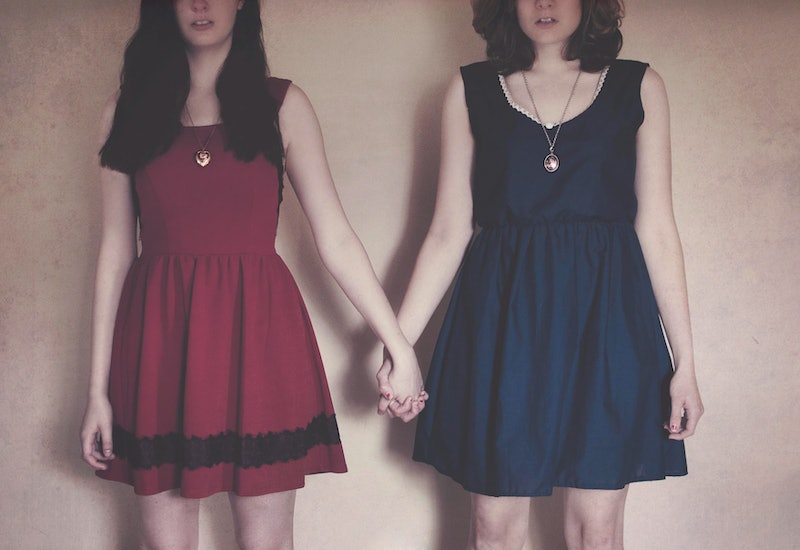 According to the National Association Of Anorexia And Eating Disorders, an estimated 0.5-3.7 percent of the American female population will develop anorexia nervosa over their lifetime — and at the moment, roughly 10 million women and 1 million men in the U.S. are struggling with an eating disorder of some kind, whether it's anorexia, bulimia, or binge eating. The stats about seeking treatment are pretty dire, too: only a third of people suffering from anorexia seek treatment, and it's estimated that only six percent of bulimics get help. With those stats in mind, if you're trying to help a friend with an eating disorder, you're definitely not alone — but it's still easy to feel alone, scared, and worried about saying the wrong thing if you're just trying to help them.

On the bright side, we're a lot more open about eating disorders than we once were. With stars like Portia de Rossi and Demi Lovato openly talking about their experiences with the press, awareness has spread about what eating disorders really mean: a battle for control. And we've now come to realize that recovery from eating disorders is longterm, and sometimes requires lifelong support.

"I am forever engaged in a silent battle in my head over whether or not to lift the fork to my mouth, and when I talk myself into doing so, I taste only shame," wrote Jena Morrow in her memoir Hollow, about her struggle with anorexia. Understanding this perspective when you have a healthy (or at least healthier) attitude to eating can feel frankly impossible — but there are ways to cope as a friend and help.

Here are 14 tips to make it easier.

Disordered eating can manifest in many ways. If you notice things out of the ordinary, do your research: it's not all about restricting food or extreme dieting. Hiding food, eating at odd times, over-exercising, use of laxatives, obsessive portion-counting and calorie awareness, horrible self-confidence — all can be signs that something's severely wrong.

Myth #1: You don't have to be painfully skinny to have an eating disorder. My childhood friend suffered from anorexia and exercise bulimia for years, and was never skin and bones; you can't "tell" from looking at a person. Myth #2: People with eating disorders are not horribly vain; they're in the grip of an obsession they can't control.

3. Be gentle and loving, rather than attacking.

Confronting the issue with a potential sufferer and letting them know you think they have a problem can seem daunting. A good way to go about it is to focus on you, not on them. What psychologists call 'I' statements — I'm worried about you, I noticed this about you, I am concerned — are more helpful and less attacking than 'You' statements — you've been losing weight, you seem out of control. It's all about being diplomatic. And pick a good place and time where they'll be comfortable and unstressed.

4. Encourage them to get help.

Treatment is hugely important for the potential recovery of any eating disorder sufferer. Obtaining help from a doctor, nutritionist, or in-patient facility may seem drastic, and may require a lot of convincing before your friend believes they have a problem — and it's a long, slow road from there. It may take multiple interventions over years: one conversation is unlikely to make an Aha! moment happen, so be prepared to keep gently pushing.

5. Refrain from criticizing yourself around them.

Don't talk about your body or the bodies of others in a negative way around them; they're hypersensitive to that sort of discourse. "Oh my god, I look like a heifer" is not helpful, even if it's followed by "But you look beautiful!"

6. ... And especially avoid 'fat talk' in their presence.

Saying "But you're not fat!" or "I'm so much fatter than you!" is not helpful to a person with an eating disorder. It simply sounds like a lie, and reinforces that fat is not a thing they are allowed to be. Keep weight out of the discussion altogether if possible.

7. Do not manipulate, shame, argue, or bargain them into eating.

This is the hardest part: relinquishing the push to do anything to convince them to eat. Taking anything other than a strongly encouraging stance about treatment and food will probably not be helpful: crying, guilt-tripping, begging, and bargaining ("if you eat it we'll go to a movie!") will not shift their thinking.

Threatening to give up a friendship or relationship unless the person seeks treatment is not a kind or helpful thing to do. You'll need to take care of yourself, but using your own presence in their life as a bargaining chip won't make them feel much self-worth.

9. .. But do set boundaries for your own self-care.

Having a friend or loved one with an eating disorder is exhausting and frustrating as hell. Seek out care for yourself and find time alone; support for others with eating disorders can be draining, particularly in what is sometimes a long, drawn-out battle. Be caring, but also respectful of your own energy levels.

One of the best things you can do for an eating disorder sufferer is let them know that they're loved and respected regardless of how they look. Also don't forget that there are other elements of their personality too — but don't be too upset if they aren't as interested in things they used to love. Eating disorders take over everything; it's in their nature to make other hobbies and interests fall away.

A straight upward arrow to recovery would be excellent, but it may not be the way things go for your friend or family member. Relapses happen, particularly if life has become stressful or something has gone wrong; eating disorders are a coping method. Recognize this and don't be disappointed or angry if it happens.

12. Encourage them to express their feelings.

Listen to them and what's making them feel out of control. People with eating disorders often feel very overwhelmed or silenced, and seeking help lets them feel heard. Expression can be through talking, art, music, or simply jumping up and down and screaming for a bit.

13. If you're family, get involved in treatment.

Family treatment is a big part of help for younger sufferers in particular. A Stanford study showed that a family-based therapy plan was actually more effective in helping recovery in an eating disorder sufferer than individual treatment — so be enthusiastic about being involved. It may mean you examine your own attitudes to food, weight, and control pretty critically, so be prepared for uncomfortable revelations.

Having an eating disorder is not like coming down with a cold. You don't get out of bed one day and declare yourself cured. Think in realistic time scales and seek out others who are in the same position and can give you guidance on how to deal with setbacks.

More like this
Tom Holland Explained His Social Media Break & Shared Mental Health Resources
By Grace Wehniainen
The Viral 'Little Miss' Franchise Is Focusing On Mental Health Next
By Darshita Goyal
On TikTok, #SeñoraEra Shows Latinx Users Becoming Their Mothers
By Natalia Perez-Gonzalez
12 Cheeky Instagram Captions To Use When You Haven’t Posted In Weeks
By Emma Carey
Get Even More From Bustle — Sign Up For The Newsletter