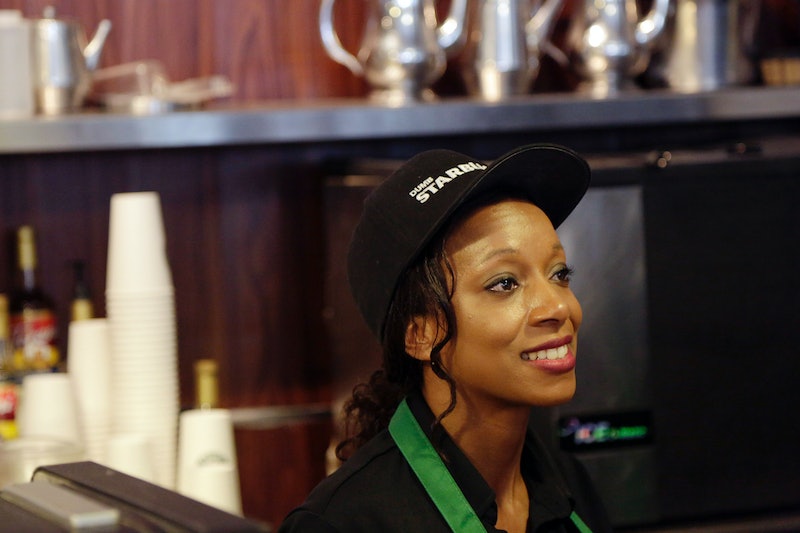 Working as a barista takes leaps and bounds more talent than pulling a decent espresso shot. Namely, it takes the strong ability to keep your lips zipped. No wonder robot baristas might one day displace all of 'em. While we wait for technology to actually catch up, I urge everyone to keep tipping well, because although their faces will never show it, baristas put up with a lot of crap. A new BuzzFeed video features anonymous barista confessions read aloud, and if you've never worked in food before, prepare your mind to be blown.

Barista skills are a good thing to personally hone if you have an interest in pursuing a creative career—which is why, if you actually ask your barista about their own life and goals, you'll find many moonlight in fascinating fields like music, visual art, drama, or (*hair flip*) writing. While these folks spend personal time working on achieving their dreams (which probably don't include perfecting the difference between foamed milk for a cappuccino and steamed milk for a latte), they get super good at fixing a convincing plastic smile to their face at very early hours. As a former barista, I gotta say it can be hugely frustrating to deal with people pre-caffeine. Customers can be rude to downright mean, and welp, baristas gotta deal somehow.

That look of pleasantness is probably a false front, to be real. Sorry to burst anyone's bubble that their barista is authentically happy to see them. Chances are, they're just experiencing effects from their quad-shot they threw back right before you arrived in their line.

Some common confessions (all which I have been found guilty of) include:

Using the wrong name or misspelling

Not to brag (but kind of to brag), one of my old shop's regulars included Penn Badgley. He was totally nice and everything, but since I was bored and felt like knocking back his ego a few notches, I'd often scrawl "Pen" or sometimes "Ben" on his drinks. Of course, he never actually commented on this, but he did continue to politely ask about my weekends. Sadly, these interactions never fully bloomed into lasting friendship, but alas.

One guy used to come in — and I'm not exaggerating — two to three times a day to order a labor-intensive skinny iced caramel mocha. These types of drinks are real pains to craft and since he never tipped, about every other order I'd sub the skim with whole. Not once did he mention my dairy revenge.

Hooking up with regulars

At least three in my book. I was single; so what? Let me live. You know, I guess it's all starting to make more sense why I was fired...