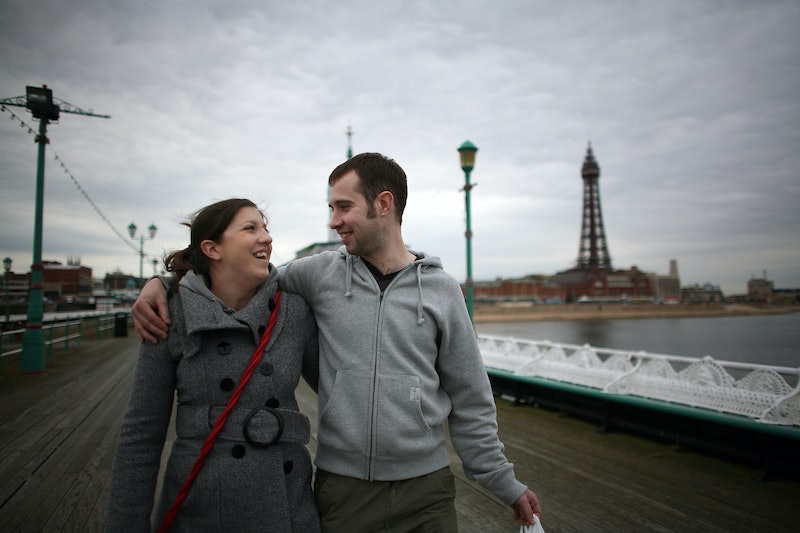 You know that thing where scientists figured out that the perfect formula for shooting a free-throw was a 52 degree launch angle and three revolutions of backspin? This is like that, except with flirting instead of basketball. According to this video from Business Insider, there are scientifically proven ways to flirt, so awkward humans everywhere should rejoice and hit the bars for a wild night of flirting. I love stories where nerds outthink their competition to prove that all you really need is smarts in this world.

Scientists at Webster University have used research to develop five crucial tips for effective flirting, which is funny because most people figure out how to flirt by just like, you know, trying it. But leave it to scientists to make flirting as clinical as performing an experimental procedure. Personally, I like to flirt with people by walking up to them, looking them up and down and saying, "Hey babe, you look hotter than a plate of cheese fries that just came out of the frier"; then again, though, maybe that's why I'm single.

The advice that the scientists give is sort of just a fancier version of what your mom probably told you about flirting — but it's definitely less squirmy because you're not sitting on a couch while your mom tries to explain to you that you should "always leave him wanting more." Here's the general gist of the video in five pictures; head on over to Business Insider to watch the full video.

In scientific language, eye contact is called the "copulatory gaze," which definitely sounds a lot like what happens when you see someone on the street and you make really sexy eye contact for an extended period of time. The scientists warn you that eye contact shouldn't be a staring contest, though, which is great advice. Aggressive eye contact is mad creepy.

Evidently, what matters when you talk is seven percent about what you say and 38 percent about the way you say it. It's not clear what the other 55 percent is, but I have to assume it's how good you smell. Also, people who are good at flirting engage in what is called "postural dominance," where they extend an arm to close the space between themselves and the person with whom they are flirting. See, I've always called this phenomenon "manspreading," but to each her own, I suppose.

Huge news: Touching someone is a way to show him/her that you're interested. If only I had known this sooner — I wouldn't have spent so many years actively avoiding touching the people I think are cute. Watch out world! You're about to get touched!

Science says there are three kinds of touching (don't worry it's not about to get dirty): Friendly, which is like a handshake; plausible deniability, which is like a forearm or waist touch; and nuclear, which is a face touch. Excuse me, I have to go touch some faces (with permission from their owners, of course).

Postural congruence is all about mirroring your flirting partner's body language. It's all well and good when all you have to do is sit at a bar with your knees pointing towards each others, but all bets are off with postural congruence when you're trying to play Twister. Just try getting your left hand on green with his right hand on yellow beneath your right ankle.

Just like momma said, always leave him wanting more. The best way to ensure future flirting is to abruptly (but politely) stop flirting and change the trajectory of the conversation. Try talking about how lots of civil war soldiers got trench foot. No one confuses a conversation about trench foot with flirting.

Check out the full video at Business Insider and go flirt your heart out, you copulatory gazer you.

More like this
The Best Time To Date After A Breakup, According To Experts
By Bustle Editors
12 Ways You're Sabotaging Your Love Life
By Teresa Newsome and Lexi Inks
Hinge's New NFAQ Feature Is Demystifying Queer Dating
By Emma Carey
Are Virgo & Capricorn Compatible In A Relationship?
By Kristine Fellizar
Get Even More From Bustle — Sign Up For The Newsletter