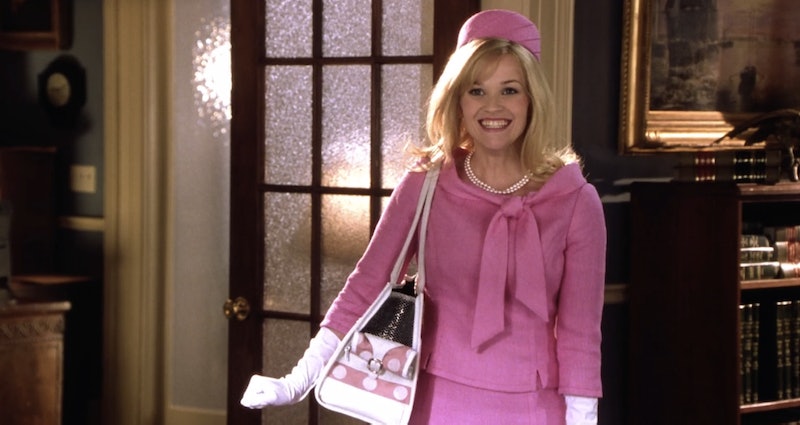 Like any golden-haired girl with a heart filled with dreams, I was psyched to hear Legally Blonde was coming to Netflix. It's cute, smart, strongly feminist, and boasts a powerful message about staying true to yourself and your strengths... overall, the perfect comedy. Legally Blonde deserves a permanent spot on our Netflix queue, to be streamed whenever we need strength and inspiration. Its mutant brain-dead clone, however — also known as Legally Blonde 2 — does not. Oof, you've probably put the Legally Blonde sequel out of your mind, haven't you? Sorry to resurrect the memories, but we have to recap.

Legally Blonde 2: Red, White, and Blonde, details Elle Woods' journey to Washington D.C., as she rallies to get a law passed to stop animal testing. The reason behind this? Because Bruiser's mom is a captured lab dog, and Elle needs to have her at her wedding. I swear to God. But there are some bright spots among this mess. Jennifer Coolidge as Paulette is consistently hilarious, and Bob Newhart makes for an adorable sidekick. But once they introduce the gay dog subplot, I'm pretty much over it.

Ah, well. For the sheer nostalgia factor, and because it indeed qualifies as a bad movie, here are 27 unacceptable things from Legally Blonde 2.

1. Yeah, this is NOT a young Elle Woods

This is one of the producer's kids in a blonde wig. Next.

Is it from, like, the Harvard Law orientation newsletter or something? Because I do NOT remember anyone with a camera during this scene.

4. "The first day they met! Emmett loves her already."

...WHAT? Who the heck took THESE pictures? This is seriously creepy, you guys.

5. Elle is a bastion of popularity with a network of Delta Nu sisters, but still only has these three at her bridal shower

And, just so we can get this out of the way, where the heck is Vivian? Weren't her and Elle supposed to be "best friends" at the end of the last movie? (Short answer: Selma Blair wisely opted out of this travesty.)

6. Elle radiates an ethereal pink glow in the first 20 minutes of this film

Seriously, check it out, it's really weird.

7. These are hot pink rhinestone pinstripes

8. Everything about this is wrong

Elle would definitely be a Starbucks girl, and she certainly wouldn't be caught dead in a mulberry skirt suit.

The fact that Bruiser's mom has glamour headshots like she's Rita Hayworth, my god...

Alternate title: How To Be Taken Seriously In Law.

11. "No biggie. I guess I don't need a scallop trim on the outer hoop skirt."

12. Elle's desk looks like this after being in the office for approximately 30 seconds

It's really more of a carnation pink, but whatever.

Progressive or idiotic? You decide.

15. The doorman at Elle's apartment building has all the free time in the world to pick out wedding flowers for her

This is the same relationship I used to have with all the disenchanted card-swipers in front of my college dorm, except not at all.

16. The fact that the doggy day spa has a beeper

The fact that they wouldn't just call in case of an emergency, although, sidebar, two dogs humping each other is NOT an emergency.

17. When they put Bruiser in Judas Priest bondagewear after finding out his orientation

19. When these two are still here

20. When this is actually my hairstyle

21. When the interns deliver this cheerleading routine

Every moment of it is cringeworthy.

22. Meanwhile, at the Barbie dream house

It's really hard to take in this much magenta before 3 pm.

23. All this activism from sorority sisters all over the world

24. "This is about a matter that should be at the highest importance to every American... my hair."

I really just want Obama to open his next speech with this line.

25. This happily ever after

Which is COMPLETELY DIFFERENT than the one she was previously modeling.